If you have a hard time undoing changes in the staging area, worry no more. All you need is to implement the tricks you will get in this tutorial.

Use any of the following commands to git undo add on uncommitted files:

Use any of these commands to apply git undo add on modified files you have committed:

Before taking a practical look at the commands using both local and remote repos, it would help understand terms that often confuse developers trying to understand git undo add.

Here are the often confusing terms that make it hectic to achieve git undo add effortlessly. They affect the git workflow in the working directory, index, and history.

Now that you are comfortable with the terms we will use in this tutorial, let us see the practical implementation of git undo add.

We will work with both local and remote repos to practice git undo add before and after modifying files.

I am creating a remote repo called git_undo_add on Github. 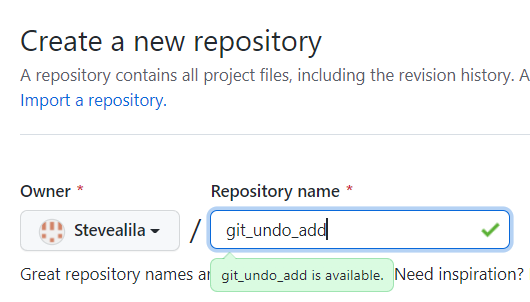 Copy the clone URL and head over to the command line or terminal and clone the repo locally.

In the context of this tutorial, a new file is accessing the staging area for the first time. On the other hand, a modified file has been through the staging area to the commit stage and probably pushed, as you are about to see.

Let us get started with new files.

Navigate to the repo we cloned.

Check if your repo is instantiated using

If not, run the command

before proceeding with the tutorial.

We have one untracked file.

Stage the file using any of these commands:

The message changed from red to green. That means git temporarily holds the files at the index while waiting for our next order. Simply put, we have cached the file. 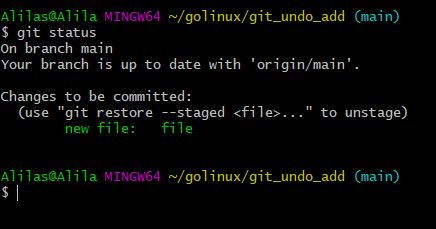 Here is a breakdown of the command. rm is the short form of remove and the --cached flag references a staged file.

Voila, the file is back to the untracked stage!

There are two ways to git undo add using the reset command. You can either use double dashes or ignore them. Let us start with the double dash way. 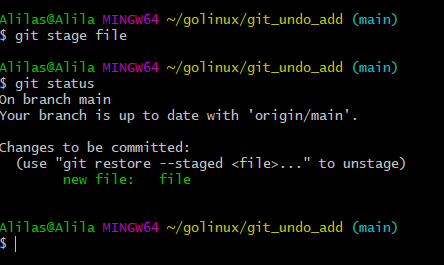 on your command line or terminal by specifying the file to unstage.

The files got untracked again.

Let us stage the files again

then run the reset command

and recheck the status

The files are back to the working directory thanks to git undo add using the reset command.

Here is what happens under the hood.

Lastly, git reset mixed is the default git reset form. That is why it is possible to use it without --mixed flag. In this tutorial's context, we use it to git undo add changes from the index because it undoes changes from the staging area to the working directory.

Apart from undoing changes on files before committing them, you may want to undo git undo add on subsequent changes in a committed file. In this section, we will stage, commit and push files, then undo the changes using three commands, git restore, git reset HEAD and git reset all.

Before unstaging the files, clear the untracked file using the command

Only README.md exists in the working directory. 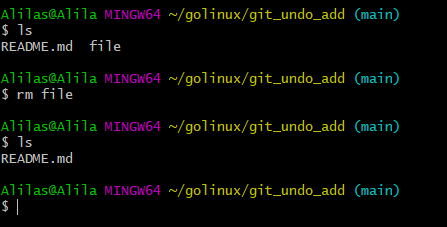 Let us create a text file.

shows the two repos are in sync. 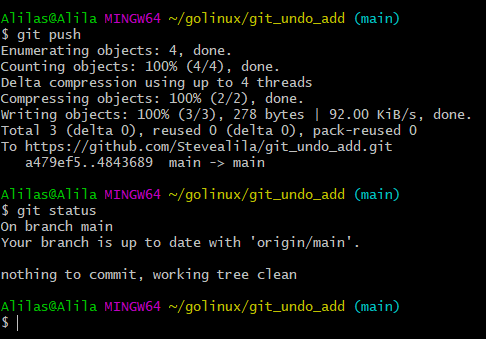 Assume we append some files to file.txt

then stage the files.

As we are about to commit the changes, we realize we staged the wrong changes and need to git undo add on the modified file. You can use any of these three commands.

command on the command line removes the changes from the index, and we can confirm that by replaying the command 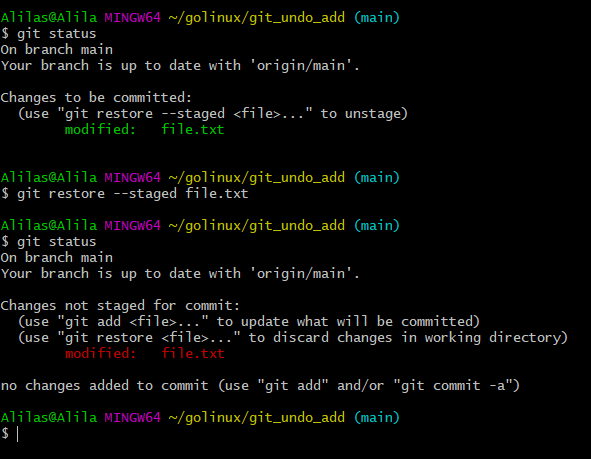 Let us modify file.txt and stage it.

Then, undo the add action on the modified file. 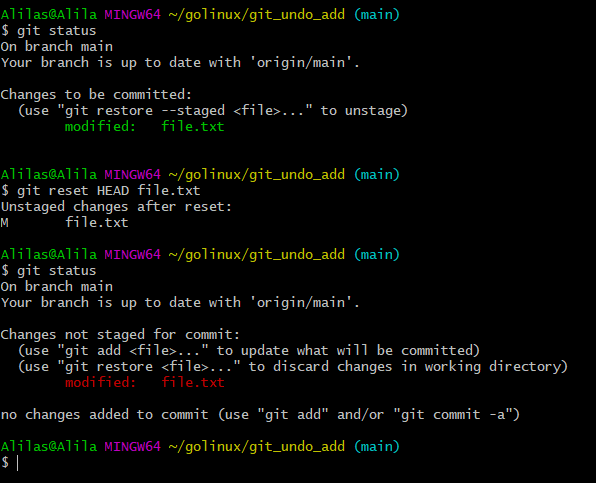 What if we want git undo add on multiple modified files? That is where the git reset all comes in.

Let us create, add and commit a second text file.

Assume we modify both committed files, as follows

to git undo add on the files.

confirms the files got unstaged. 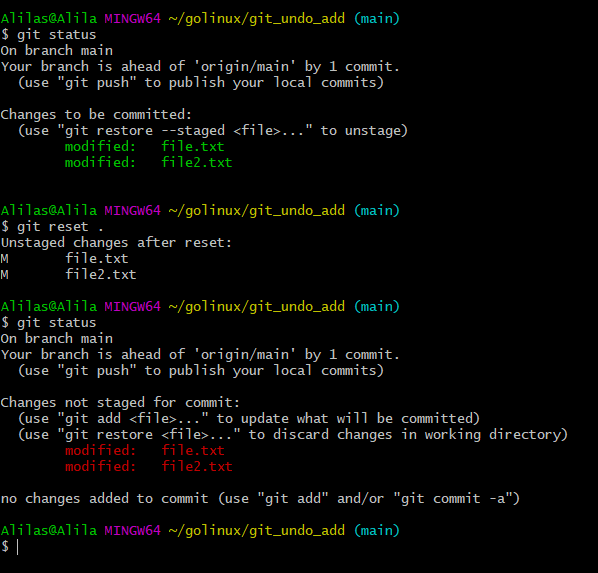 Although the cached and reset commands can also undo modified committed files, the most suitable commands to use are restore, reset HEAD, or reset all.

The six typical commands to simplify git undo add are

which can undo new or modified files, whereas

are specific to modified files after git commit.

It is your turn to apply the most suitable command according to the challenge you want to solve.