Using git switch (Is it alternate to git checkout?)

Git switch and git checkout let you create and move into a branch. The main difference between the two git commands is that git switch focuses on branches while git checkout targets commits.
Failure to deeply understand the boundary between the two commands could make it hectic to choose the right command for a task. Also, other commands such as git restore, git rm and git reset could confuse you further when picking the best command for the task.

This tutorial simplifies usage of the confusing commands. Let's dive right in.

(a) Both commands move the HEAD

For instance, you can switch from the main branch to another branch.

(b) Both commands create a branch

where the -c option tells git to create a branch and check it out.

Where the -b option tells git to create a new development line (branch) and move the HEAD into it.

Those are the primary similarities between the two git commands. Explore more in the following sections of this tutorial.

Know the difference between git switch and git checkout

This section focuses on git HEAD and branching and how they relate to git switch vs git checkout.

Working with git is all about managing commits: create, undo and group. A commit is an object with metadata about versions of changes.

You make a commit by creating a file, staging and committing its changes. You can undo the changes from history, staging area or the working tree. Finally, grouping commits occurs through branching.

Branching is creating and moving into independent development lines. Technically, a branch is a named reference to the latest commit in the workflow.

The latest commit is also known as the HEAD. You can check the HEAD's pointer by logging the history

or manually checking the .git subdirectory.

For example, if you are on the main branch, the contents of the .git/HEAD file will be

Here, the ref tells git to refer to the specified path to know the location of the latest commit in the repository. refs (branches and tags) is simply a naming system for commits.
heads is another name for branches, while tags, as you may guess, denotes tags. main is where the latest commit lies.
git switch targets heads: creating and moving into them. On the other hand, the checkout command affects the HEAD file.

ALSO READ: How to use git revert properly [4 Different Ways]

Since the HEAD (the latest commit) is known by peeking the active branch, git checkout can do the roles of git switch: create and navigate branches.

Apart from the latest commit, git checkout undoes changes on other commits along the git workflow: working tree, index and history.

Knowing the best command per task is the key to unlocking speed and chopping off errors when handling a project.

Before git version 2.23, git checkout was an overworked command. It undid changes on a file, committed and switched branches. The multi-tasking led to confusion when deciding on the best situation to apply the command.

To prevent confusion, the git team decided to introduce more commands, each tied to a specific role. The notable introductions of git version 2.23 were git switch, and git restore.

For instance, you can use git checkout to detach the HEAD by checking out a commit.

As a result, git checkout is helpful when restoring changes lost during a hard git reset.

You can use git rm as the alternative to git restore on undoing changes. Unlike git restore that returns changes to the working tree, git rm unstages and deletes a file from the filesystem. Replace git reset with git revert when handling pushed changes.

I am creating a repository on GitHub called git_switch,

copy its URL and git clone it on the command line.

cd into the cloned repository and create two commits, totaling three commits because git made the initial commit on creating a repo with a README.md.

We have three commits to practice git switch and related commands. Let's do that right away.

Let's use the switch command to create a branch and relocate the HEAD.

Git informs us that we are into a new branch. Also, we have two branches.

We can return to the main branch and delete the newly created branch.

Here, we have created a branch to divert the HEAD from the main branch to the secondBranch.

Let's return to the main branch and delete the secondBranch.

Detaching a commit makes it impossible for git to account for the changes made at that state. You can detach the HEAD to inspect its changes or restore it after a hard reset. Let's go with the latter.
Check history.

The 94624be commit no longer exists in history. However, git reflog still has information about the discarded objects before garbage collection.

So, we can detach the HEAD from there. 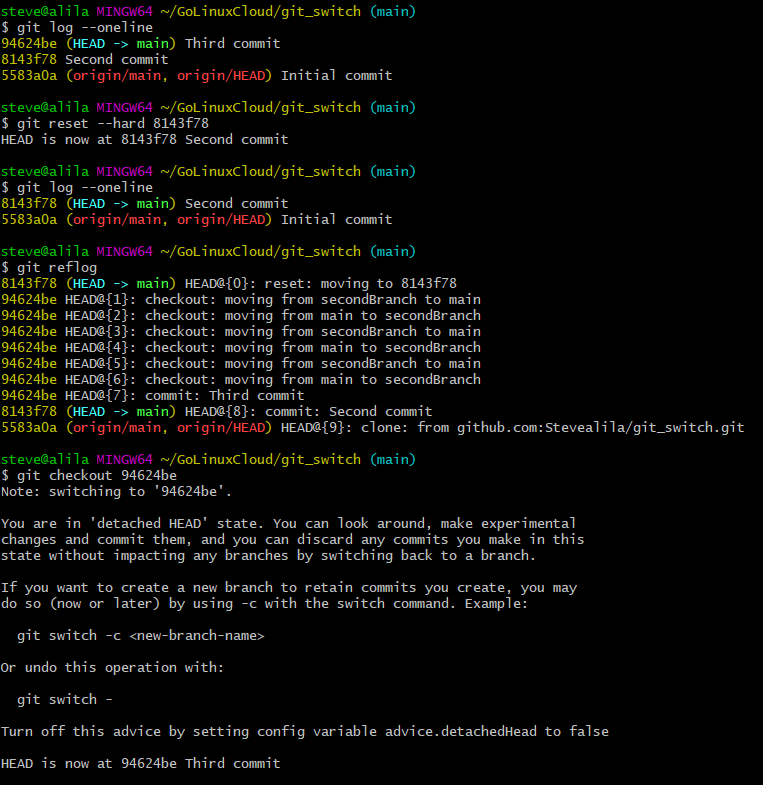 Then create a branch from the detached HEAD. That returns the deleted commit to the workflow.

Move to the main branch and rebase the recoveryBranch. 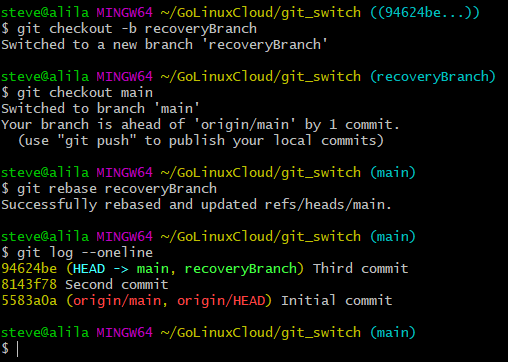 And voila, our reset commit is back to history! We can now delete the recovery branch because it has served its purpose.

The above illustration shows that git reset is a disruptive command, discarding files and commits. That is why you should use git revert on pushed changes to avoid a conflict error on subsequent pushes.

Let's now look at the difference between git switch, checkout, restore and rm. 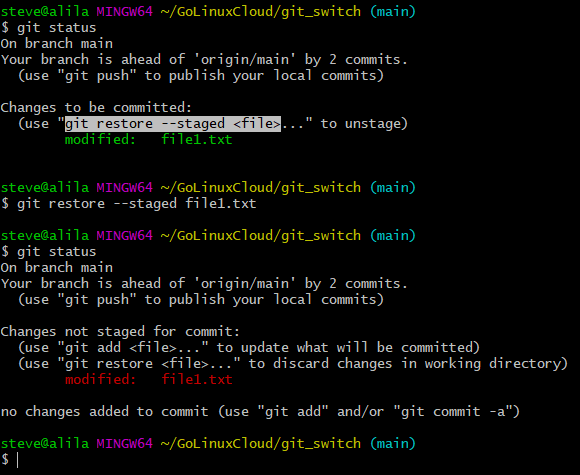 The file is untracked. Similarly, we could undo the changes using git checkout.

Alternatively, git rm helps remove the files from the index as follows.
Stage the file.

Delete it from the staging area and filesystem.

This time around, git expects us to commit the changes before completely updating the index. Otherwise, you will keep seeing the message about the taken action on running git status.

Let's wrap it up by committing and pushing the changes. 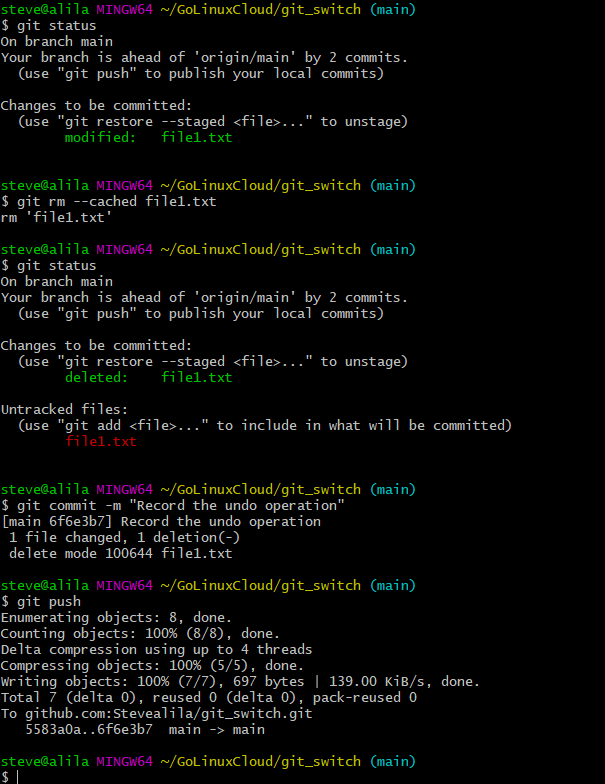 Although git switch and git checkout seem to perform the same operation, you can spot their differences by understanding the relationship between git HEAD and the refs.

Lastly, as explained in this tutorial, it would help to distinguish the two commands from git reset, git restore, and git rm.