You want to move content from one git repo to another in the same cloud server while preserving the history. Better yet, you want to transfer a portion of the repo from server A to server B.

Either way, you are about to find a solution in this tutorial. Let us start with the requirements.

Following command creates a copy of a repository's online content on your local machine.

Git remote is a command to control the link between the local repository and its copy in the cloud server. The remote, also called the upstream, is a customizable URL. It mainly references a name (e.g., origin) and a branch (e.g., main).

The reset command plays a critical role as you move content from one git repo. It discards what you no longer need, creating a space for incoming content. It exists in three forms: mixed, soft, and hard.

The soft reset changes the HEAD's position without deleting the files. The mixed reset unstages a file. Lastly, git reset hard, which we will apply in this tutorial, deletes commit objects and discard the affected files from the filesystem.

Although there are many ways to move a file in git, we will stick to the mv command and git filter-branch. Git mv command moves or renames a file.

You can force a move using the -f option.

The git filter-branch command rewrites git revision history, rewriting the branches depending on the supplied option. The options can change each tree and its information. For instance, the --subdirectory-filter option, that we will use in this tutorial,

only acts on the specified subdirectory. It enables us to create multiple repositories from the main repository.

In five steps, let us use the above commands to move content from one git repo to another.

I am creating a repository on GitLab called move_content.

I copy its URL and clone it locally.

Navigate into it and create two files and two directories with a file each.

Stage, commit, and push the changes. 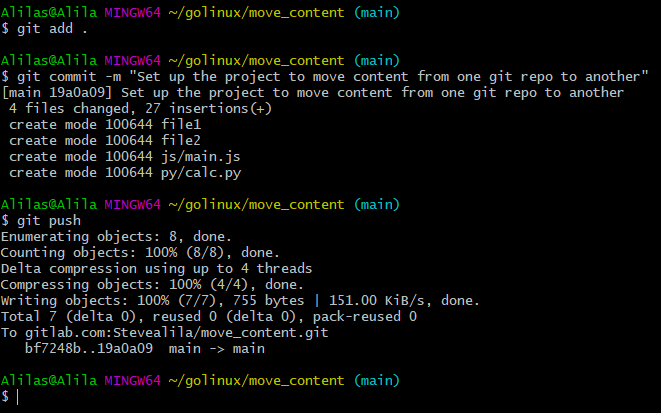 That is all we need for repo A. Let us use it to move content from the py directory to repo B on GitHub: migrate_repo. 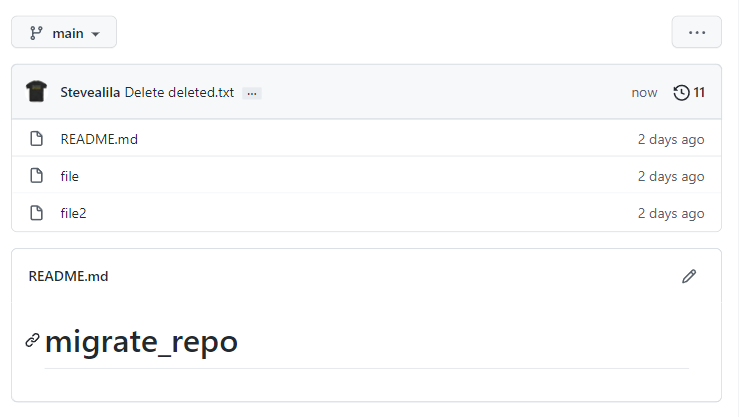 As you can see from the above screenshot, repo B lacks the py directory we want to move into it. Let us do it as follows.

Move content from one git repo to another in 5 steps

Step-1: Clone repo A and remove its upstream

We have cloned repo A from GitLab. Let us check and remove its upstream.

The current upstream is the origin. Remove it to avoid accidentally overwriting it. Then, confirm its deletion.

Let us chop off anything we do not need from repo A, except the py folder we are interested in. We can do that using the filter-branch command we learned earlier.

In case we have remnants of unwanted data, we can delete them using the following commands: 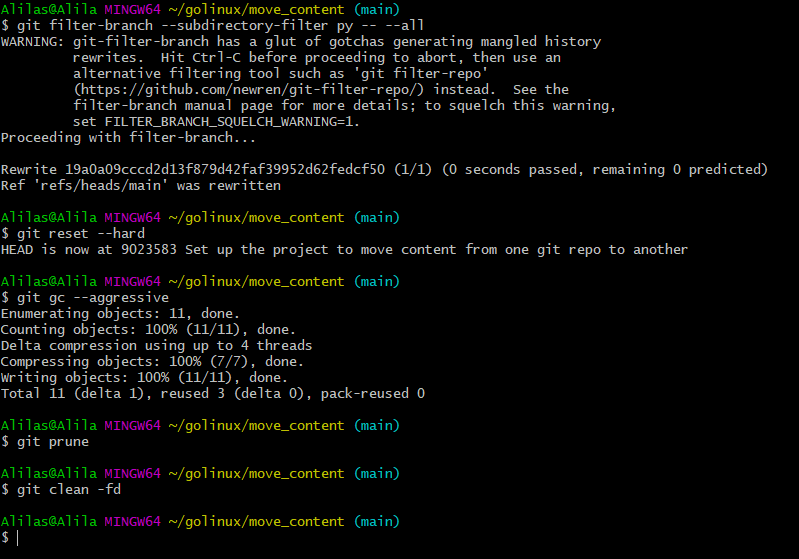 The reset command checks for remnants of the unneeded objects and discards them. The garbage collection (gc) command cleans any mess made while dissecting the py subdirectory from repo A.

Let us make a directory with the -p option.

The -p option informs the terminal to make parent directories if needed.

Now we shall loop through the lines in the .py file.

And move them to the new directory

until the transaction is over.

Now that we have moved the target content into the new directory, let us commit the changes.

And navigate to repo B to move content from one git repo to another.

Step-4: Clone repo B and create for it a remote to repo A

Head over to the repo you want to transfer content into and clone it. I am cloning the GitHub repository called migrate_repo I showed you in the setup section.

cd into it and create a remote to repo A and confirm the new remote.

You can replace remote_to_A with any word. 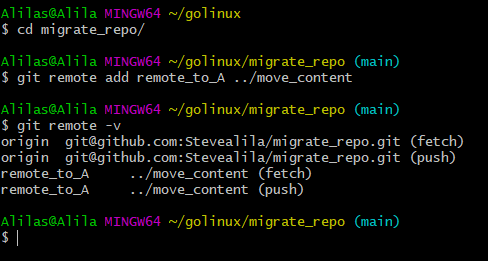 Step-5: Fetch updates and push to repo B

Pull all changes and history from the remote's (we created in step~4) main branch, accommodating unrelated histories.

Our default text editor opens up, asking for a merge message. 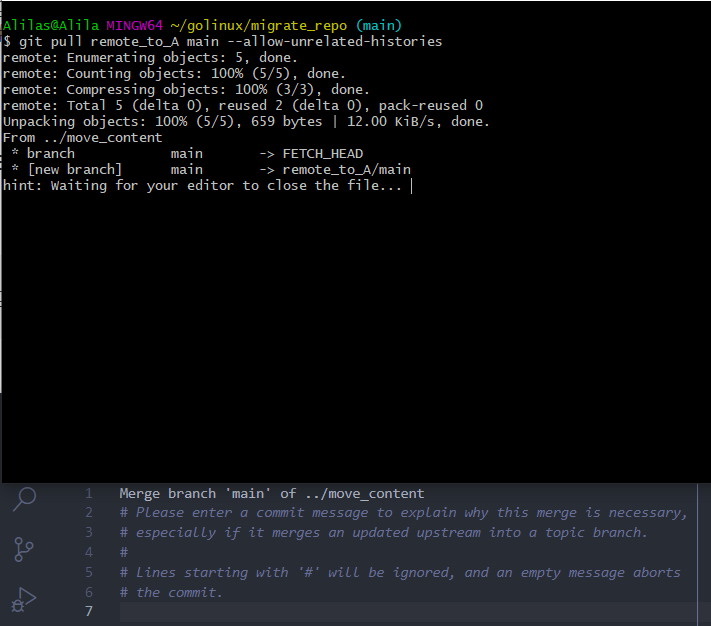 Give it a commit message to complete the transaction. 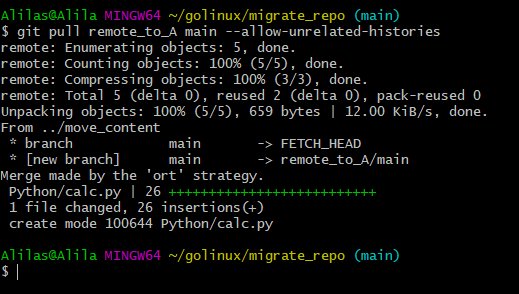 We can then delete the temporary upstream because it has served its purpose: move content from one repo to another.

And push the changes to repo B's remote. 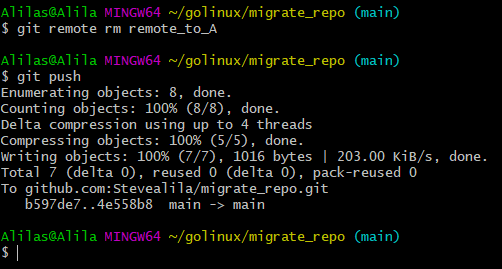 We can then confirm the completed transaction on GitHub. 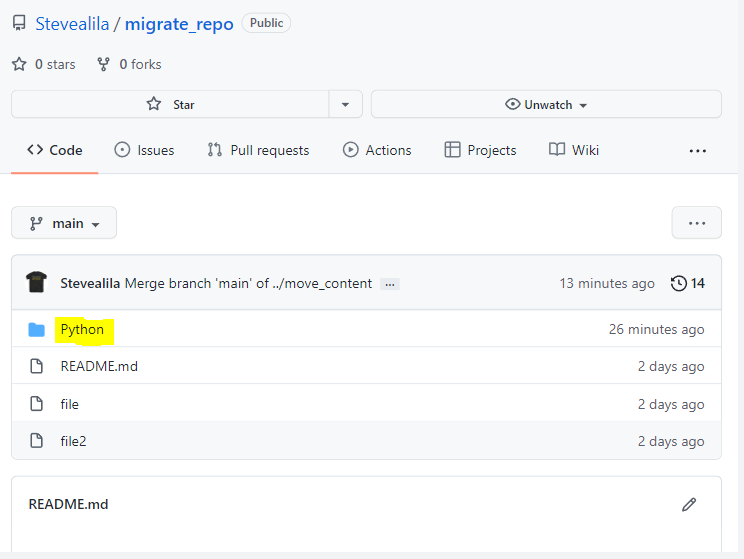 We have moved the py directory from repo A (on GitLab) to repo B (on GitLab) without losing the folder's history.

It is easy to move content from one git repo to another by following straightforward steps. It starts by understanding the key commands needed in the process. You then dive into a step-by-step transfer of the target content, ensuring you preserve the history.