Setting up Visual Studio Code remote SSH with GitHub for development can be tedious. However, everything can be up and running in a few minutes by following a no-nonsense guide.

All you need are git, GitHub account, Visual Studio Code, and a remote development extension then set up a server and configure SSH.

This tutorial uses Debian 11 on Oracle VM VirtualBox as a server. We will do most of the installations from scratch before practising fundamental git workflow. What is more? Let's get started.

Visual Studio Code is a code editor made by Microsoft. It is one of the top code editors that developers love because of its rich features.

For example, we will use its Remote SSH extension to set up Visual Studio Code remote SSH with GitHub. Besides, you may use the Remote Development extension with other tools besides Remote SSH.

SSH (secure shell), also referred to as OpenSSH or remote SSH, is a network protocol that enables a safe connection to a computer on another network.

The level of security of SSH depends on the algorithm used. The most typical SSH encryption algorithms are RSA, DSA, EdDSA, and ECDSA. GitHub's authorized SSH key types are RSA and EdDSA.

Git is an efficient tool to track cumulative changes on a file. Its efficiency results from using it offline and having a copy of the project in your machine. To boost the safety and availability of your tracked files, you can push the changes to a cloud server like GitHub.

Now that you know what it takes to set up Visual Studio Code remote SSH with GitHub, let's jump to the installations and configurations.

How does this work?

The flow of this article would be

This article assumes that

Why can’t we directly connect Visual Studio Code with GitHub?

This is a valid question and most user would prefer to do the same but in many corporate organization, the provided Linux box are only allowed to connect to GitHub/GitLab and we may have some firewall related limitations. So we can use Visual Studio Code to connect to this Linux client and work on our GitHub/GitLab repo

I am on my terminal. I run these commands to install git. 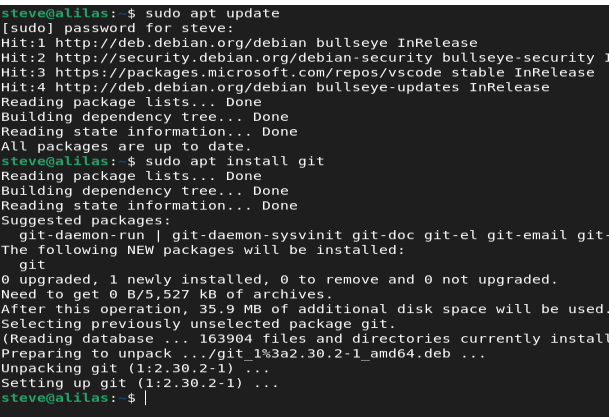 Next, configure your default username, and email. The username and email will be crucial when committing changes after setting up Visual Studio Code remote SSH with GitHub.

I am setting my details as follows:

Check if SSH client is installed on your server in the /usr/bin/ssh file (We should say folder but remember everything in Linux is a file).

Before generating SSH keys to set up Visual Studio Code remote SSH with GitHub, create a GitHub account and log into it.

Next, generate the SSH key pair. 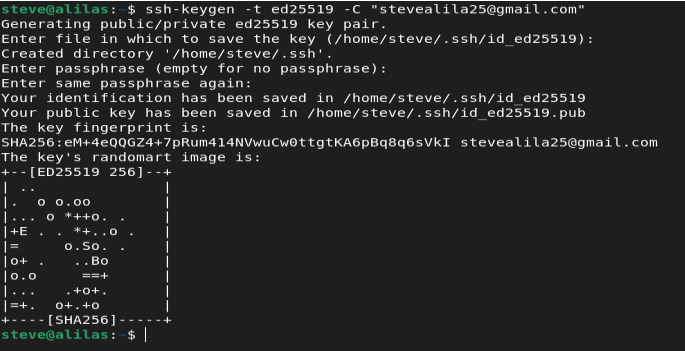 where -t specifies SSH type, and -C symbolizes the comment.

Set up RSA SSH key pair type of 4096 bits if your OpenSSH version is below 6.5 or your GnuPG is below version 2.1. You can check both versions using these commands:

If your server meets the above criteria but still cannot use EdDSA encryption, use 4096-bit RSA.

where -b symbolizes bits.

ALSO READ: Decoding git init for you and when to use it?

Launch ssh-agent in the background and add the private keys to it.

if you encrypted SSH key pair with 4096-bit RSA.

View and copy the SSH key pair's public part on your terminal as follows.

Head over to GitHub -> Settings -> SSH and GPG Keys, then set the SSH Title and paste the copied public Key. 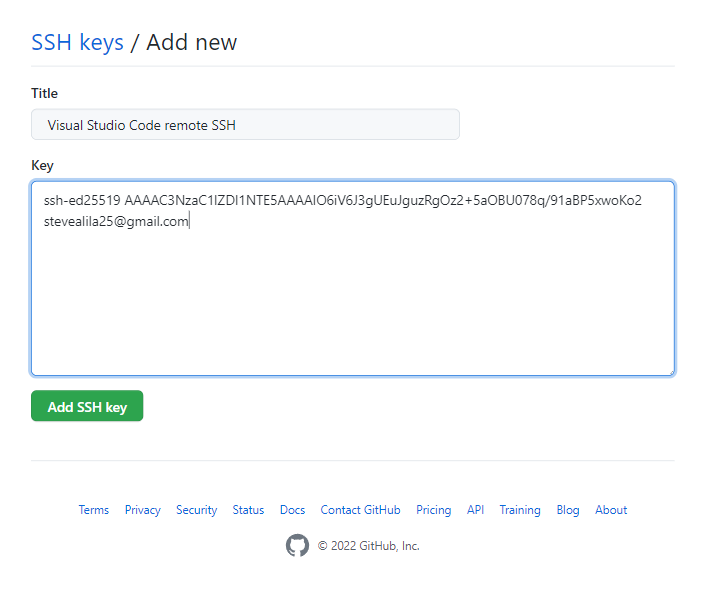 To confirm successful SSH to GitHub, return to the terminal and run this command

GitHub greets us with a success message.

We can now create a GitHub repo and clone it via SSH. I am creating one called remote_ssh. You can skip this step if you already have a GitHub repo. 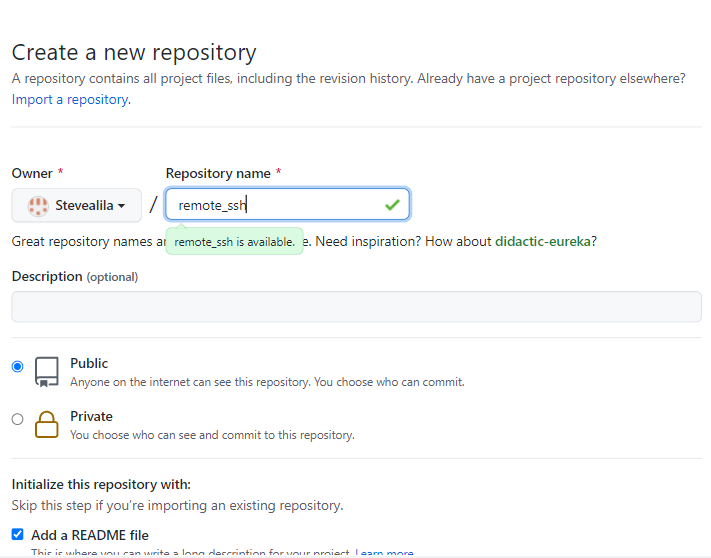 Grab its SSH URL and clone it. 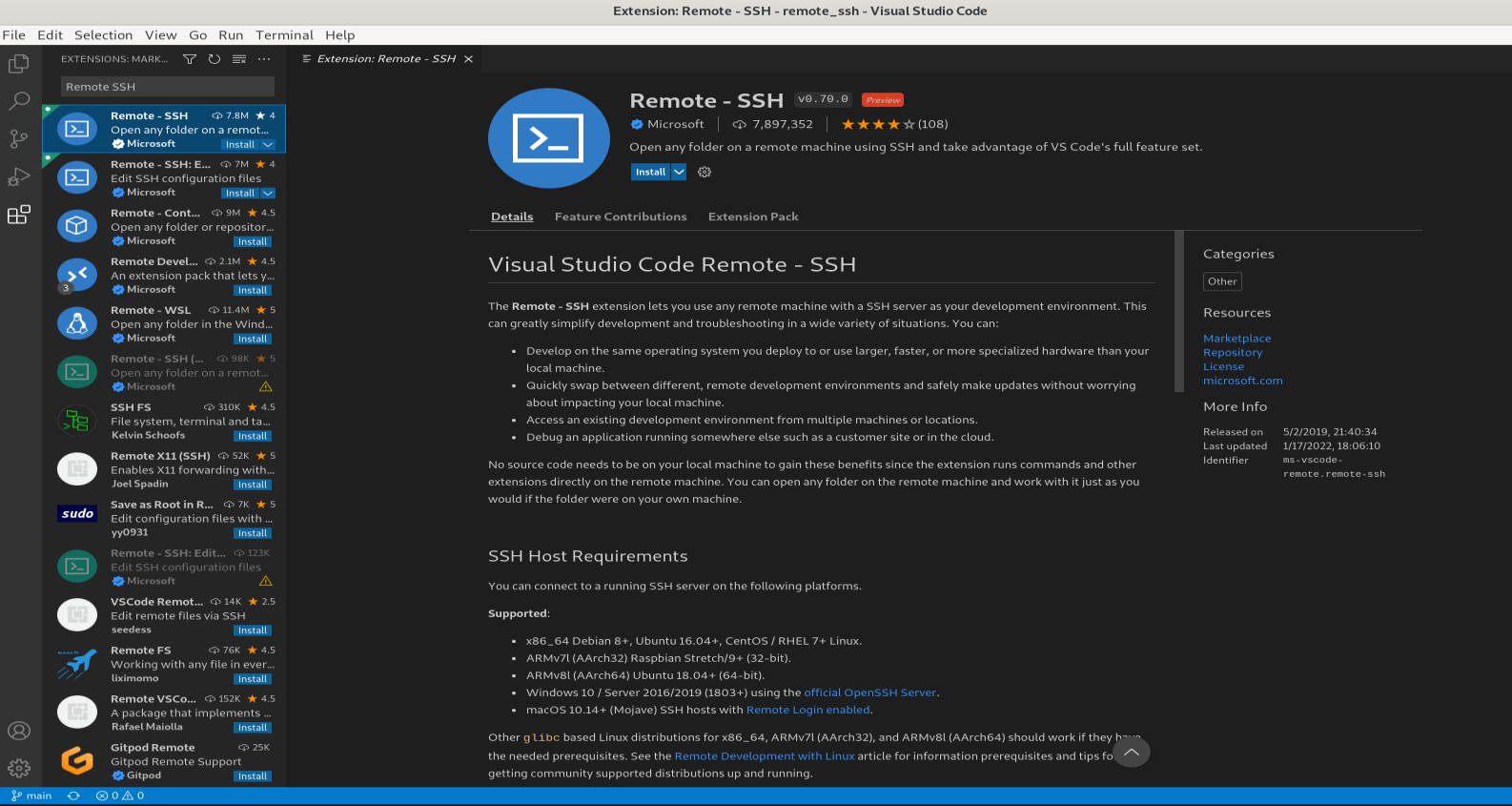 On prompt to select configuration file to update, pick the first option.

Enter details of your server. The Host can be any name that comes to your mind. The Hostname can be your server's IP address or the machine's name. The User is the current user logged into the server.

Append another line called IdentityFile and attach your private SSH key's destination to it. Depending on your server configuration, you may need to append the port number.

Once the Visual Studio Code remote SSH with GitHub setup is complete, the bottommost left corner of the screen shows the SSH's destination.

If you click on Open Folder, you see all your folders under the currently signed-in user. You can navigate to the folder where the remote_ssh repo is cloned.

Now you can manage your server from Visual Studio code!

Add a commit message on the input box and click on the tick above the box.

to push the changes. 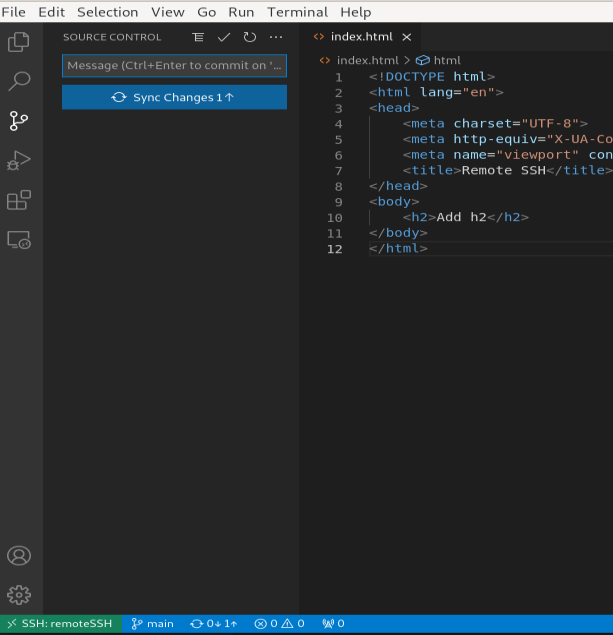 Visual Studio code asks if we want to push the changes to the remote repo's main branch.

And voila, our changes are on GitHub thanks to setting up Visual Studio Code remote SSH with GitHub!