Getting started with steps to setup GitHub with Visual Code

Knowing how to set up GitHub with visual studio code will simplify your software development process. Here's what happens in a typical git-GitHub-Visual Studio Code workflow.

You build a remote repo on GitHub and clone it on your terminal. Next, you create and modify files in the Visual Studio Code. You then return to the terminal to stage, commit and push the changes to the remote repo.

The back and forth switching between applications can be tiresome. Worse yet, you may lack the skills to use the terminal. Or you want to see details of what you do on a GUI.

ALSO READ: Decoding git init for you and when to use it?

After that, you can modify, commit and push files. As you will see in this tutorial, you can comfortably make branches, merge and delete them from Visual Studio Code. You can also handle pull requests and issues using extensions we will install.

Let's dive into a detailed explanation of the concepts before learning how to set up GitHub with visual studio code with examples.

Git is a free, open-source, actively maintained, distributed version control system. It gives you the convenience of tracking file changes and software versions online and offline.

In an offline setting, git stores the changes in the git database, whose details lie in the .git subdirectory of your project's root directory. You can take a snapshot of your repo in a cloud-based service like GitHub, GitLab, or Bitbucket.

But how do you modify the files? That is where a code editor like Visual Studio Code comes in. Visual Code Studio is a cross-platform source-code editor made by Microsoft.

Requirements to set up GitHub with visual studio code

Install git and Visual Studio Code of your operating system, then create a GitHub account.

Know the basics of git workflow

Before attempting to set up GitHub with Visual Studio Code, you should understand what happens in a git workflow. Learn the three levels of the workflow: working directory, file staging, and change committing.

Next, you should know how to push and undo changes. Lastly, it would be best to understand git pulling, branching, merging, and rebasing.

That is all you need to set up GitHub with visual studio code. We can now prepare a lab to manage a GitHub repo using Visual Studio Code.

It would help to confirm our git and Visual Studio code installations before doing any practice or trying to set up GitHub with visual studio code.

ALSO READ: How to unstage files in git without loosing changes

To check for git installation, open your terminal or command line and run the following command.

Similarly, you can check the Visual studio code installation as follows. 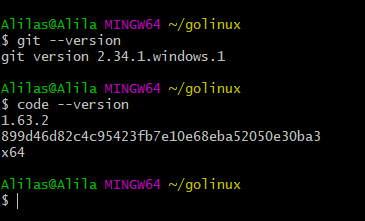 Configure your git username, email, and text editor because git will need them for the commits.

I am setting mine as follows:

Enable git in VS Code

Open a new Visual Studio Code window. On the bottom-left corner, you see the settings icon which tooltips to Manage on hover. 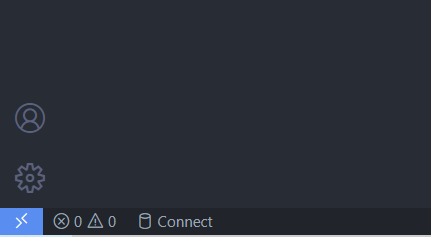 Click on it followed by settings. In the search box, type git enable, scroll down and check the box labelled, Git: Enabled. 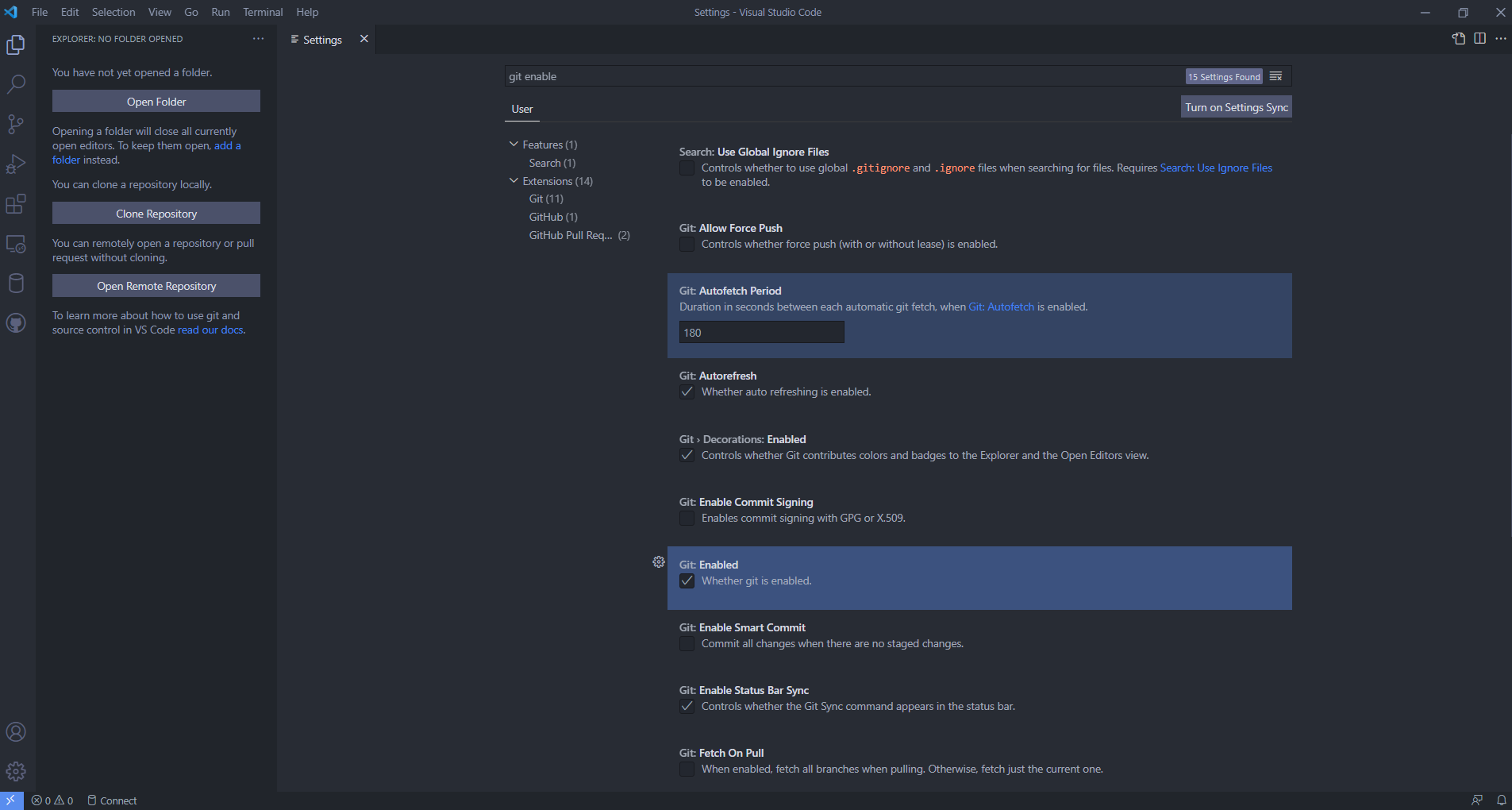 Return to Visual Studio Code's main page. Next to the Manage icon is Accounts. Click on it followed by Turn on Settings Sync, then Sign in and Turn on and Sign in with GitHub.

The system takes you to your default browser, from where you can log in to your GitHub account, enabling you to set up GitHub with Visual Code Studio. Click Continue and accept prompts till you get redirected to Visual Studio Code. 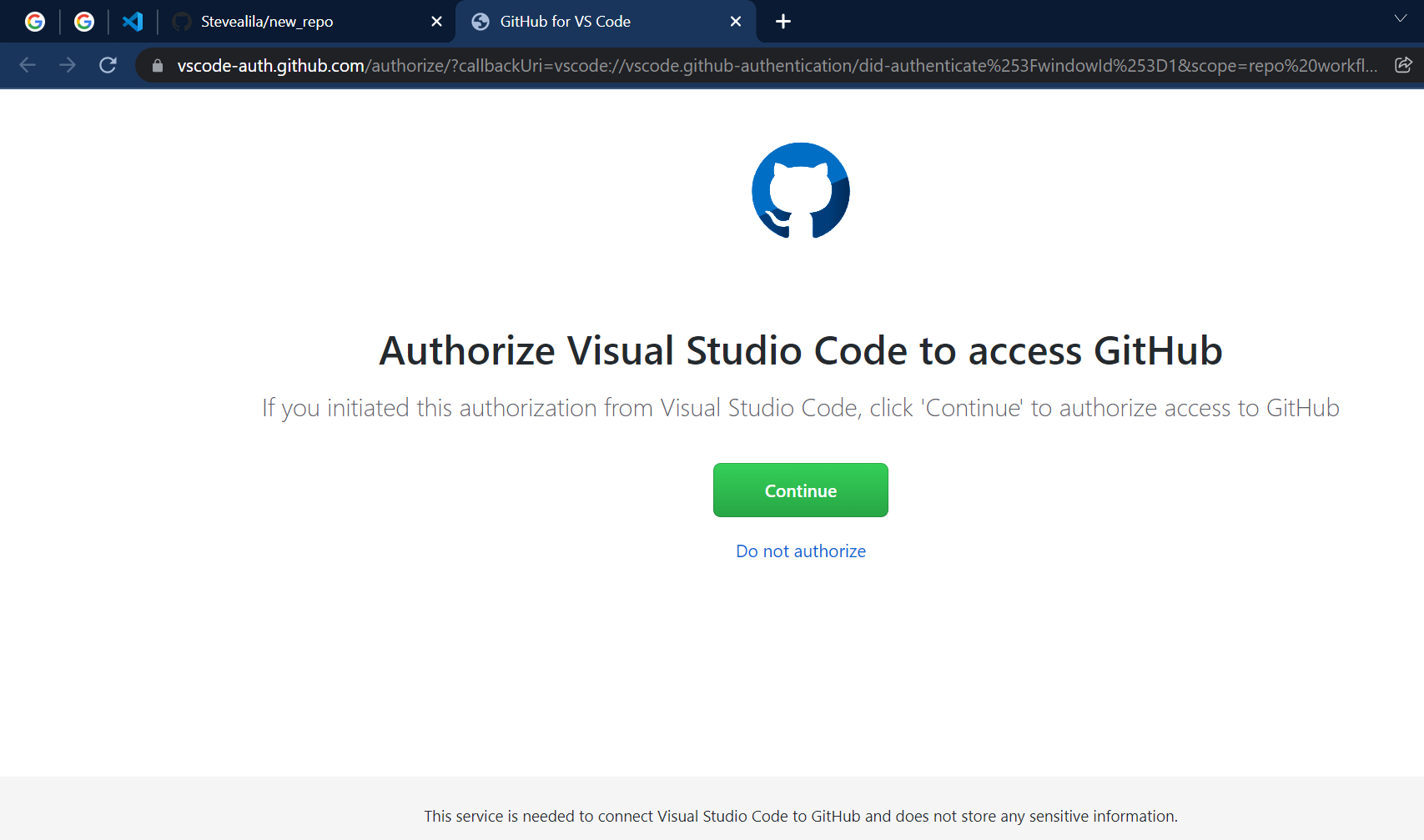 Head over to GitHub and create a repo to practice setup GitHub with Visual Studio Code. 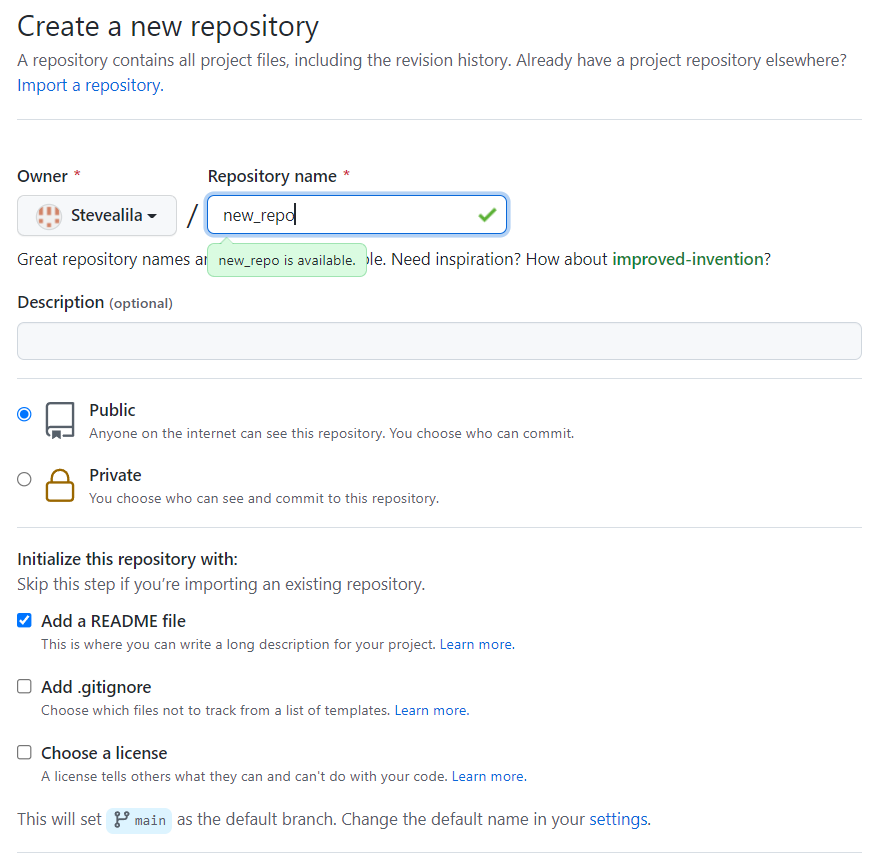 Now that we have set up GitHub with visual studio code, let's use the environment to explore a standard git workflow.

Example-1: Set up GitHub with visual studio code to commit and push a file

Otherwise, GitHub leads you to the login page where you can sign in to GitHub. It then redirects you to Visual Code Studio on successful login.

Pick the repo, new_repo, we created in the lab section.

Save the repo in a folder, create a text file with the words "text file" and save it.

The Source control tab shows we have a new change. Likewise, the file gets marked with U meaning untracked. Click on the Source Control tab and the plus, + sign on the file. That's the equivalent of git staging on a terminal workflow.

Enter a text message in the textbox and click on the tick whose hover reveals Commit.

The entered text is our commit message. Lastly, we can push the changes using these four main ways.

I am using the option 4 above.

Checking the repo on GitHub confirms our git push action was successful.

We can modify the file, stage, commit and push the changes using the same steps. Let's see how to collaborate on the remote.

Creating, switching between, and pushing branches is simple after setting up GitHub with Visual Studio Code. Click on Source Control (Ctrl+Shift+G), the ellipsis ... followed by Branch, then choose a target option.

We can also create a branch by clicking on the current branch, main, then follow prompts till we make and check out a branch. I have created one called branch_B.

And follow the example-1 steps above to push the changes.

Lastly, we can merge branches and pull changes by checking out the main branch, clicking Source Control (Ctrl+Shift+G), the ellipsis ... followed by Branch and choosing Merge branch, picking branch_B then pushing the changes to synchronize the remote repo with the local one.

There are multiple extensions to apply as we set up GitHub with visual studio code. Here are two of the most crucial ones.

ALSO READ: Git merge vs rebase and the problems they solve

Head over to the Extensions tab and search the extensions' respective names.

After installing the GitHub Pull Requests and Issues extension, you should see the GitHub icon. On the other hand, the GitHub Repositories extension creates a screen-like shape named Remote Explorer on hover. 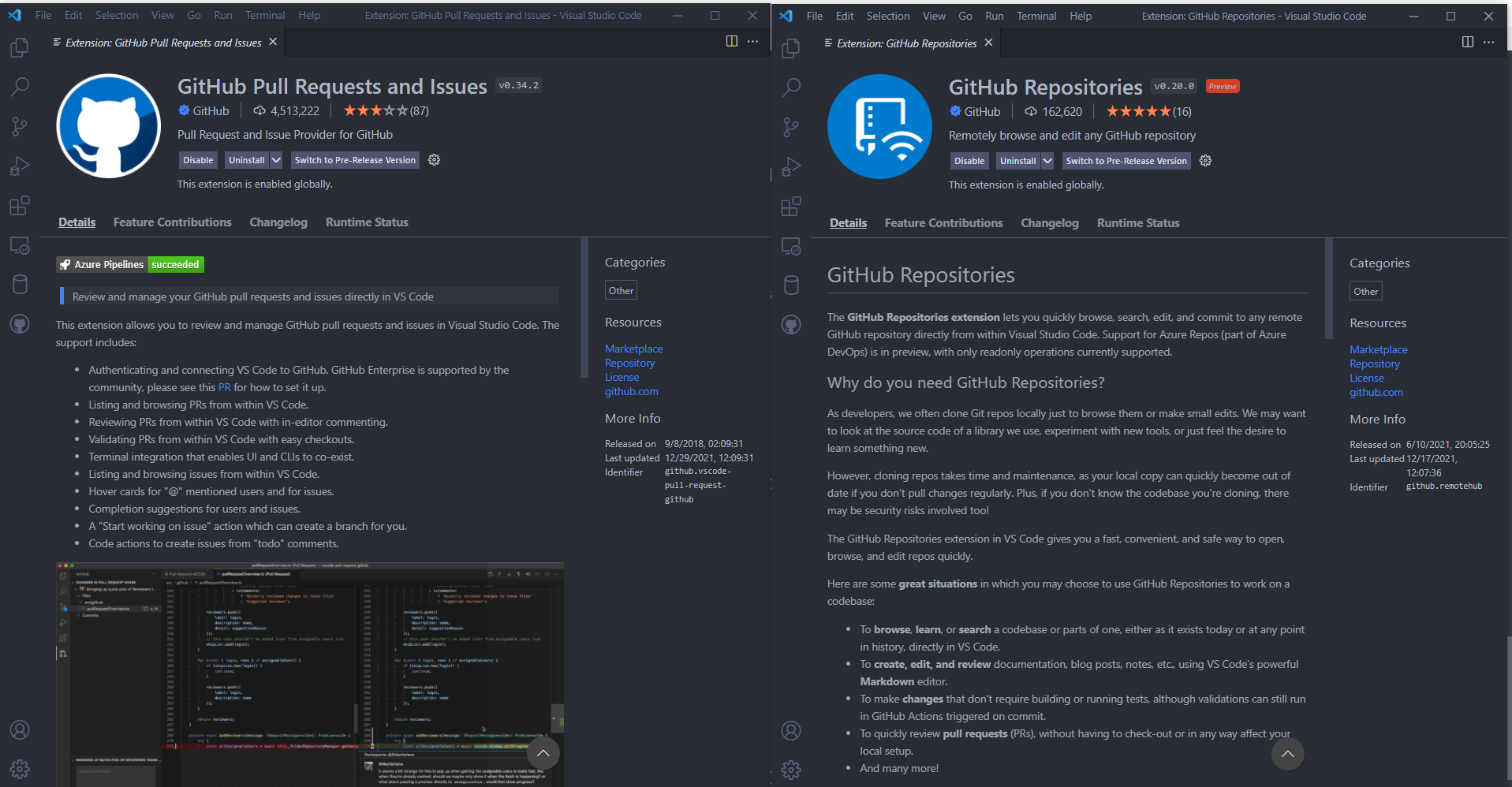 Their friendly docs should guide you to use them smoothly. You can also find guidelines on how to use GitHub Repositories Visual Studio Code's documentation.

You just learned how to set up GitHub with Visual Studio Code and practiced a basic git workflow. Now is the time to ease your software tracking journey by using the workflow alongside command-line commands.