or the shorter form:

Since the above method assumes the name of the remote is the origin, you can replace the remote-name as follows,

or shorten it as:

The second route to git remove remote is to navigate to the directory containing the repo and clear the entire repo as follows:

Lastly, you can git remove remote by renaming it. Running the following command

overrides the existing remote, thereby deleting it by creating another independent remote.

This tutorial makes it easier to understand git remove remote by explaining what lies in git remote followed by a step-by-step implementation of the three typical ways to git remove remote.

It would be best to get your hands dirty when following this guide by doing the exact steps illustrated. That will enable you to learn the concepts twice faster. What is more? Find out below.

What is git remove remote?

Git remove remote is a way to delete the link between the local repo and its remote. Typically, a local repo has its root on your development folder lying on your computer, whereas a remote (repository) exists on a website such as GitHub, GitLab, or Bitbucket.

When setting the upstream, all you do is replace the remote URL with an easy-to-remember name like origin or upstream. So, origin, upstream, and a remote repo URL mostly refer to the same thing.

However, introducing a third repo in the equation can differentiate between origin and upstream, for instance when you fork a repo. Then, origin refers to the immediate repo you push changes to, whereas upstream means the parent repo where you forked origin repo's code.

You can learn more about the origin and upstream here.

Now that you know what we are about to work with, let us apply the knowledge in practical usage of git remove remote in the following sections of this tutorial.

I am creating a remote repo known as git_remove_remote on GitHub.

Then copy the repo URL

and move to the terminal or command line. Clone the repo, as shown here:

Let us build the empty repo to remove the remote repo.

Navigate to the new repo.

Stage and commit the file.

Repeat the procedure for a second commit history.

Let us view the commit history

in readiness for git remove remote.

We will modify the setup according to the needs of a target example: removing and adding the remote, creating files and tracking files before pushing the changes.

Removing the upstream is the most typical and recommended way to git remove remote.

Let us move one directory backward and create an environment, exploring the challenging part of removing a remote repo like the cloned repo's remote we are about to remove.

Now, create two commits in the history as we did in the setup section above.

We ran into an error, fatal: not a git repository (or any of the parent directories): .git. Here, the command line tells us the current directory has no permissions to track files. We can make the repo track changes by initializing it.

Now that the repo is instantiated, let us continue building the commit history before the push.

Let us try using the same command on the cloned repo.

We don't encounter an error this time because a cloned repo comes with a remote name. We can check the name using the -v flag, as shown below:

The cloned repo has a name, origin.

On the other hand, the non_cloned_repo lacks a remote name, making it impossible to push its changes to a remote repo. Neither can you remove its remote.

Let us assign the repo, non_cloned_repo a push destination by adding the name and URL, as follows:

Although the conventional name is the origin, you can set it to any word you like. For instance, I am setting it to upstream.

After adding the remote, we can push our changes through it.

and confirm the effect on the remote repo on GitHub.

We can now remove the remote using any of these commands

confirms the remote is gone! 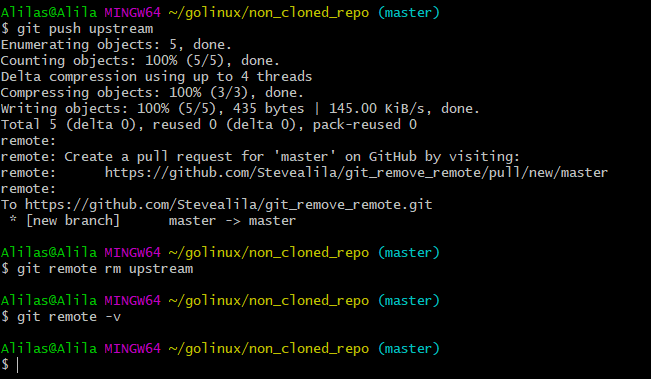 Here are more ways to remove the remote repo.

The two indirect ways to git remove remote are clearing the .git subdirectory or overriding its name with a new one.

Let us reintroduce the name of the repo, non_cloned_repo, we deleted earlier.

We can see the .git subdirectory. It holds all the information concerning the repo, such as the commit history, commit objects, and remotes.

We can view the remotes folder by moving further into the .git subdirectory, as follows.

Since the .git subdirectory hosts the remote information, deleting it is one of the ways to git remove the remote. Let us do that right away.

Navigate to the folder containing the .git subdirectory and run this command:

Using the -r flag, we tell our command line to remove everything in the .git subdirectory recursively.

Option-3: Override the git remote with a new name

Let us return to the git_remove_remote repo.

Override the remote name by changing it to new.

Our initial remote origin no longer exists! Instead, we have new in its place. We can rename it to origin and delete the remote as follows.

You have seen the ways to git remove remote. The primary method is git remote remove <remote-name>. Alternatively, you can remove the entire .git subdirectorygit rm -rf .git or rename it using the command git remote rename <old-name> <new-name>. Go ahead and apply what suits your git remove remote needs.