In this article I will share the steps to configure software raid 4. I will explain this in more detail in the upcoming chapters. I have written another article with comparison and difference between various RAID types using figures including pros and cons of individual RAID types so that you can make an informed decision before choosing a RAID type for your system

This level is very much similar to software RAID 3 apart from the feature where software RAID 4 uses block level stripping rather than byte level so software RAID 4 works similarly to striping. However, a dedicated drive is used to store parity information. Every time data is written to an array disk, an algorithm generates recovery information that is written to a specially flagged parity drive. In the event of single disk failure, the algorithm can be reversed and missing data can be automatically generated, based on the remaining data and the parity information. 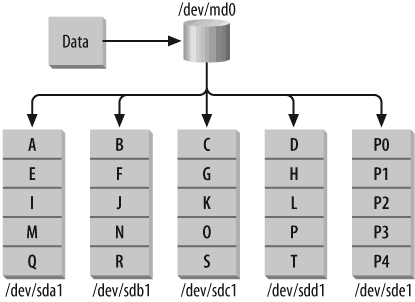 There are below certain steps which you must follow before creating software raid 4 on your Linux node. Since i have already perform ed those steps in my older article, I will share the hyperlinks here

HINT:
Advertisement
Software RAID 5 offers much better performance when compared with Software RAID 4; almost everyone should choose the former.

Now since we have all the partitions with us, we will create software RAID 4 array on those partitions

When this array is initialised, the last member disk listed in the command line using mdadm, becomes the parity disk which here is /dev/sdd1. RAID 4 also supports spare disks.

On my test system, these processes use about 60 percent of the CPU during the resynchronization. That compares to about 2 percent for a RAID 1 initial synchronization.

Once the resynchronization is complete, re-check the mdstat output

Lastly I hope the steps from the article to configure software raid 4 on Linux was helpful. So, let me know your suggestions and feedback using the comment section.