Zettabyte File System (ZFS) is an advanced file system originally developed by SunMicrosystems. The most important features that distinguish ZFS from other filing systems are its high storage capacity and protection against data corruption.

ZFS was originally developed by SunMicrosystems as part of Solaris. After the OpenSolaris project was launched, ZFS was released as open source software. With the acquisition of SunMicrosystems by Oracle in 2010, the ZFS source code was discontinued and an attempt was made to convert it to closed source. After that, he started the open-source OpenZFS project, which includes ZFS entirely.

Let's install ZFS, one of the best file systems, on Rocky Linux 9.

Then install the epel-release package to use the epel repository:

ALSO READ: How to improve disk IO performance in Linux

Epel repository is  active. Install the dkms package from this repository:

In order to install the kABI-tracking kmods the default repository must be switched from zfs to zfs-kmod:

Advertisement
NOTE:
If zfs is enabled instead of zfs-kmod, too many dependent packages will be installed on the system. Also, you will encounter an error while adding the module to the kernel.

The zfs package was installed on the system with its dependencies.

After installation, the zfs module should be added to the kernel:

Verify that the module is successfully enabled:

You’re now ready to create a pool on your attached disks. To list the available disks we can use lsblk command:

In this example we will create a mirror pool where one disk will act as a mirror to another disk. 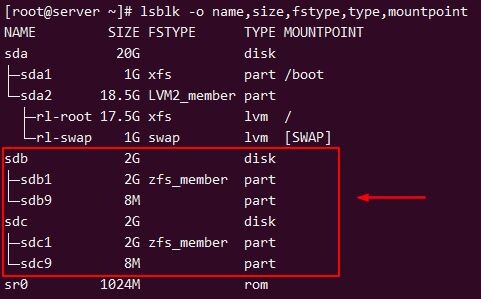 Destroy or Delete a ZFS Pool

We can use zfs destroy command to completely delete a zfs pool:

You can get detailed information about zfs with the following command:

For all the work you can do with zfs, the following command will help:

ALSO READ: How to remove obsolete packages in Ubuntu? [SOLVED]