iotop is a short form for Input/Output top and is similar to top command in Linux. iotop is a useful command that allows the user to monitor I/O usage in the disk. It provides the list of all I/O operations by the processes or threads in the Linux system.

iotop program is designed with Python and requires Kernel for executing and monitoring I/O usage details. Only the root user can run iotop command. System administrations can use it to find particular processes with high I/O read and write in the disk.

To execute iotop command, the following programs are must:

You can check the Python version in the terminal by using command python --version.

To check the Kernel version, use the command uname -r.

If the output version is lower than the required version, use sudo apt-get update to get the latest version of all installed packages and their dependencies.

How to install iotop

Before using iotop command, you have to install it in the system.

Different examples to use iotop command

iotop command requires root privileges so you can either log in as a root user or use sudo in front of iotop command to execute it.

In this article, you will learn how to use iotop command and monitor the disk I/O usage details in the Linux system.

1. Get the iotop version

sudo iotop --version is a simple command that can be used to get the version detail of iotop program. As you can see in the output above, 0.6 is the version of iotop.

You can execute iotop without any additional argument: 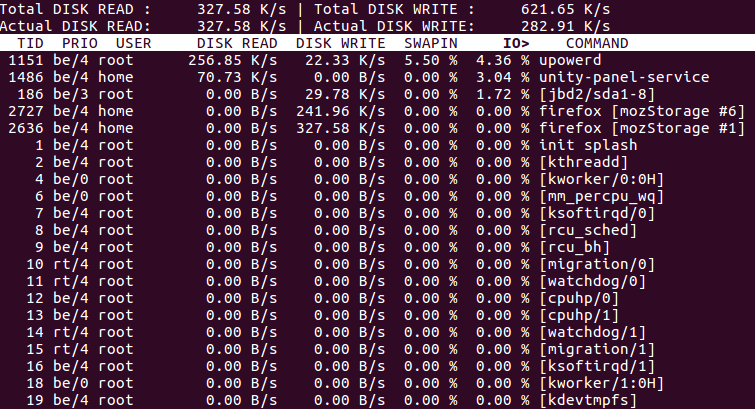 This command allows the user to monitor the details of I/O usage on the disk.

4. Get the output in non-interactive or batch mode using iotop command

The output displayed in non-interactive mode cannot be intervened unless you kill the program by pressing Ctrl+c.

5. Get disk I/O details of a particular process with iotop command

sudo iotop -p command requires a number as an argument that denotes the process ID. This command allows the user to see the particular process with process ID.

For example, if you use sudo iotop -p 22 then it will display only the I/O operation with Process ID 22.

6. Set the number of iterations with iotop command

iotop -n command also takes a number as an argument which indicates the iterations to be done in the output. It updates the output for a fixed number of times before quitting the program.

For example, if you use iotop -n 7 then the output will be updated for only 7 times. The default time is infinite so the program never quits on its own.

Use this code in your terminal to get the desired output.

Use -a argument with iotop. It displays the accumulated I/O instead of the bandwidth. It shows the amount of I/O processes done since iotop started.

It takes an argument of existing user in the system to monitor the details of that user. It displays the processes or threads operated by a specific user.

For example, if you use sudo iotop -u home then the I/O usages by user home are only displayed.

Use -t argument with iotop command. It displays the output with timestamp in each line. Each line will have a current time.

10. Get details of processes only with iotop command

This command helps you to monitor the I/O usage by processes only. Normally, the output contains all the threads. In the output below, you can see the column PID which indicates the process ID. 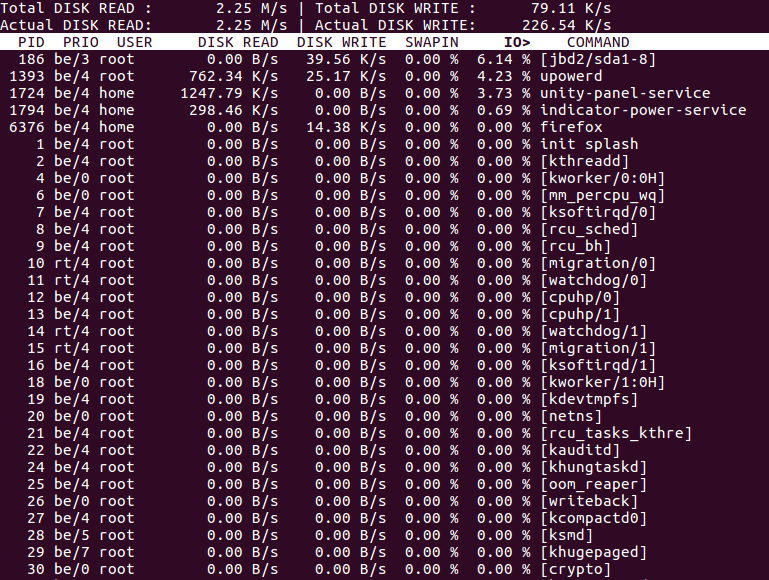 11. Hide some lines of header with iotop command

Use -q argument with iotop. It is used to hide some lines of header in the output. The top of the interface will disappear on the output.

Use -k argument with iotop command which displays the bandwidth in kilobytes only. Normally, it is shown in bytes, kilobytes and megabytes depending upon the size.

As you can see in the output below, the file larger than 1024 kilobytes is also shown in the unit kilobytes.

Use iotop command with -d argument to provide the numerical value using which the iotop should delay the output. It takes an argument as a number for the time in seconds.

For example, if you use sudo iotop -d 8, then the details will update every 8 seconds only in the output. Use this code in your terminal to get the desired output.

This is the basic command in Linux to get the help message. 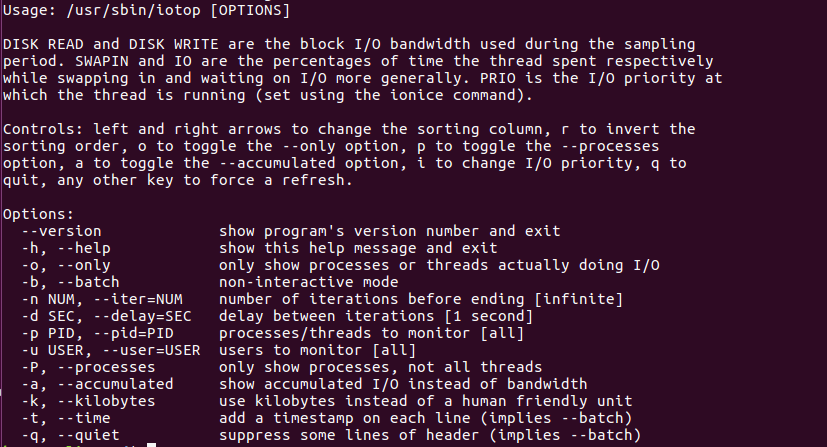 These are the keyboard shortcuts in iotop tool which can be used in the output displayed in the interactive mode.

These are some example of using iotop commands in the Linux. iotop is a very useful tool to track down the processes or threads which are causing high IO usage in the disk.