grep command in Linux searches for a pattern of characters in a file. grep is a short form for Global Regular Expression Print. It prints all lines that contain the matching pattern in a file. If no patterns are matched, it returns nothing.

How to use grep command

The basic syntax for grep command is:

You can find more detailed information in our article 20 grep command examples in Linux [Cheat Sheet].

In this tutorial, we will discuss 25 grep command scenarios with examples in Linux. Sample text file which we will use through out this tutorial.

By default, grep prints lines that match the pattern. But sometimes, you may need to print N lines after matching the pattern.

The -A option allows you to print N lines after matching lines.

To print the next 3 lines after matching text share, execute the following command.

Similarly, you can use the -B option to print N lines before matching lines.

We will add line numbers to our sample file:

Next let us grep for string "Iron" and print 1st, 8th and 10th line after the match.

4. grep pattern and print the next word

Use the following syntax to use grep and print the next word after each match.

To print everything in line after the match, run the below command.

5. grep pattern and print word before the pattern

The following example searches for a pattern and prints a word before the matching pattern.

To print everything in line before the matching pattern, use the following command.

The -w option can be used to match whole words. For instance, if you grep the, it will print only lines that contain the whole word the.

As you can see, -w ignores matches that do not form the whole word.

7. grep next character after the match

The following command prints the next 10 characters after the matching pattern shop.

And this command prints the next 15 characters after the match window.

8. grep the previous character after the match

The following command prints the previous 10 characters after the matching pattern shop.

And this command prints the previous 15 characters after the match window.

9. grep and print only matching pattern

The grep command with -o prints only the matching pattern instead of a complete line.

The -H option prints the file name for each match. It is helpful when there are multiple files to search for patterns.

The following example searches the text bar in all .txt files in the current directory.

You can combine the grep command with regular expressions (regex) to perform an advanced search on the file. For example, the following command matches any line that contains numbers 0 to 9.

The -n option forces grep to display matching lines along with their line number at the beginning.

13. grep recursively in all directories and sub-directories

14. grep recursively only till a certain depth in the directory

You can use the grep command with the find command to perform a recursive search only till a certain depth in the directory.

15. grep pattern and delete a line from a file

You can also use the grep command to delete a matching line from a file. The following command removes matching lines from a test.txt with the help of grep and mv command.

Here, the -v option is used to get non-matching lines and the output is redirected to a file tmpfile. The second command moves tmpfile to test.txt, replacing the old one.

As you can see, all matching lines are removed.

Grepping patterns with spaces is helpful when you only want to match patterns that contain spaces.

For example, this command searches for an exact match hours with leading or trailing white space characters.

A caret (^) indicates the beginning of the line. To search for lines that start with S, you can use ^S regex.

Similarly, you can use the dollar sign $ to search lines that end with a specific pattern.

This command finds lines that end with d.

It prints the lines that contain either of the matching patterns.

The following example prints the lines that contain either hours or movie in a test2.txt file.

You can also use -e option to search for multiple patterns with OR condition.

To use grep command with AND condition, use the following syntax.

The following grep command gets all valid IPv4 addresses from a specified file.

22. grep strings with alphabetic characters only

You can use the following command to match strings with alphabetic characters only. 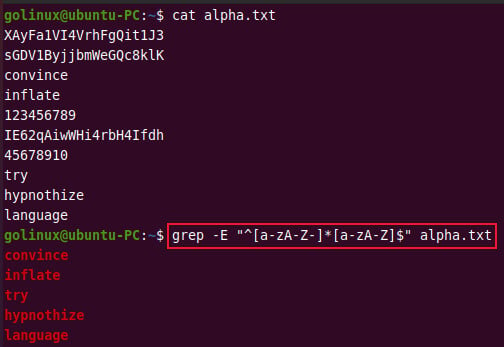 23. grep strings with alphanumeric characters only

To match strings with alphanumeric characters only, use the following syntax.

ALSO READ: 6 practical scenarios to use grep recursive with examples 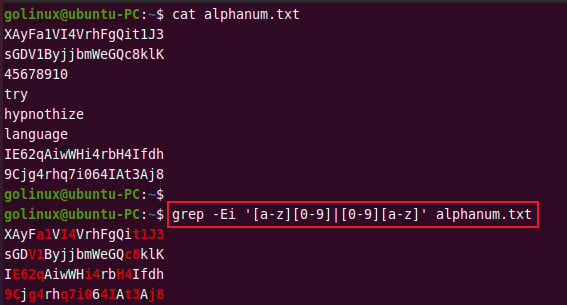 We will try to grep some of them using grep. We have used -E with pipe to provide conditional pattern which we have also used in our previous examples.

We can also utilize below options with grep when looking out for special characters:

Here is an example to grep for backslash.

But you should know that you cannot combine -F or -G with -E. In such case you will get grep: conflicting matchers specified.

25. grep for 2 words with TAB between them

You can use the below grep command to search for 2 words with TAB between them.

By this point, you should have understood how to use grep commands for advanced searching and filtering patterns in Linux. We hope you find these 25 examples of grep commands useful.

If you have any questions or feedback, please let us know in the comment section below.

how to grep and print the next N lines after the hit?
grep: output specific line after match
To grep for a word before matching pattern
Grep characters before and after match?
Can grep show only words that match search pattern?
How do I recursively grep all directories and subdirectories?
How to delete from a text file, all lines that contain a specific string?
How do I grep for multiple patterns with pattern having a pipe character?
Using grep to get 12 letter alphabet only lines
How to grep for two words with a tab in between them