In this article I will share the steps to configure software raid 5 using three disks but you can use the same method to create software raid 5 array for more than 3 disks based on your requirement. I will explain this in more detail in the upcoming chapters. I have written another article with comparison and difference between various RAID types using figures including pros and cons of individual RAID types so that you can make an informed decision before choosing a RAID type for your system

How does RAID 5 works?

RAID-5 eliminates the use of a dedicated parity drive and stripes parity information across each disk in the array, using the same XOR algorithm found in RAID-4. During each write operation, one chunk worth of data in each stripe is used to store parity. The disk that stores parity alternates with each stripe, until each disk has one chunk worth of parity information. The process then repeats, beginning with the first disk. 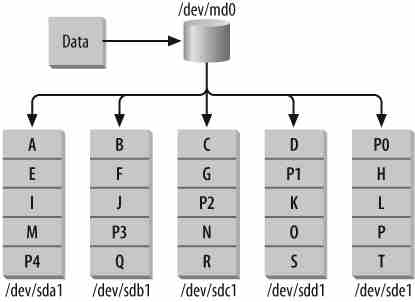 Take the example of a RAID-5 with five member disks. In this case, every fifth chunk-sized block on each member disk will contain parity information for the other four disks. This means that, as in RAID-1 and RAID-4, a portion of your total storage space will be unusable. In an array with five disks, a single disk’s worth of space is occupied by parity information, although the parity information is spread across every disk in the array. In general, if you have N disk drives in a RAID-5, each of size S, you will be left with (N-1) * S space available. So, RAID-4 and RAID-5 yield the same usable storage.

IMPORTANT NOTE:
Also like RAID-4, a RAID-5 can withstand only a single disk failure. If more than one drive fails, all data on the array is lost.

Why choose RAID 5 over RAID 4?

RAID-5 has become extremely popular among Internet and e-commerce companies because it allows administrators to achieve a safe level of fault-tolerance without sacrificing the tremendous amount of disk space necessary in a RAID-1 configuration or suffering the bottleneck inherent in RAID-4. RAID-5 is especially useful in production environments where data is replicated across multiple servers, shifting the internal need for disk redundancy partially away from a single machine.

There are below certain steps which you must follow before creating software raid 5 on your Linux node. Since I have already performed those steps in my older article, I will share the hyperlinks here:

HINT:
Software RAID 5 offers much better performance when compared with Software RAID 4; almost everyone should choose the former.

Now since we have all the partitions with us, we will create software RAID 4 array on those partitions

mdadm defaults to the left-symmetric algorithm, so you can safely omit the -p option from the command line.

HINT:
The left-symmetric algorithm will yield the best disk performance for a RAID-5, although this value can be changed to one of the other algorithms (right-symmetric, left-asymmetric, or right-asymmetric).

To create a software raid 5 array using 5 disk partitions, you can use below command

During a disk failure, RAID-5 read performance slows down because each time data from the failed drive is needed, the parity algorithm must reconstruct the lost data. Writes during a disk failure do not take a performance hit and will actually be slightly faster. Once a failed disk is replaced, data reconstruction begins either automatically or after a system administrator intervenes, depending on the hardware.

Once the sync is complete re-validate the output of mdstat

Lastly I hope the steps from the article to configure software raid 5 array on Linux was helpful. So, let me know your suggestions and feedback using the comment section.