How to improve disk IO performance in Linux

In my last article I gave an overview on SystemTap to help you trace and debug kernel modules, Now here before we understand on how to improve disk IO performance, we should understand the basics of IO flow in the Linux environment.

Below flow chart gives you an overview of how IO request flows between User Space and Device. 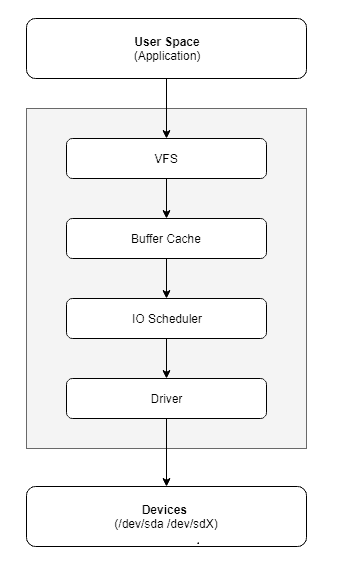 To improve disk IO performance you must be clear on the IO challenges and issues your system is suffering from:

To check the currently active scheduler

Here, bfq is the I/O scheduler being used on my Fedora 28 system (with a more recent kernel):

This is the simplest I/O scheduling algorithm. There is no ordered queue, new requests are always added either at the front or at the tail of the dispatch queue, and the next request to be processed is always the first request in the queue.

The main goal of the "Complete Fairness Queueing" elevator is ensuring a fair allocation of the disk I/O bandwidth among all the processes that trigger the I/O requests. To achieve this result, the elevator makes use of a large number of sorted queues—by default, 64—that store the requests coming from the different processes. Whenever a requested is handed to the elevator, the kernel invokes a hash function that converts the thread group identifier of the current process (usually it corresponds to the PID, see the section "Identifying a Process" in Chapter 3) into the index of a queue; then, the elevator inserts the new request at the tail of this queue. Therefore, requests coming from the same process are always inserted in the same queue.

To refill the dispatch queue, the elevator essentially scans the I/O input queues in a round-robin fashion, selects the first nonempty queue, and moves a batch of requests from that queue into the tail of the dispatch queue.

Besides the dispatch queue, the "Deadline" elevator makes use of four queues. Two of them—the sorted queues —include the read and write requests, respectively, ordered according to their initial sector numbers. The other two—the deadline queues —include the same read and write requests sorted according to their "deadlines." These queues are introduced to avoid request starvation , which occurs when the elevator policy ignores for a very long time a request because it prefers to handle other requests that are closer to the last served one. A request deadline is essentially an expire timer that starts ticking when the request is passed to the elevator. By default, the expire time of read requests is 500 milliseconds, while the expire time for write requests is 5 seconds—read requests are privileged over write requests because they usually block the processes that issued them. The deadline ensures that the scheduler looks at a request if it's been waiting a long time, even if it is low in the sort.

Next, the elevator checks the deadline queue relative to the chosen direction: if the deadline of the first request in the queue is elapsed, the elevator moves that request to the tail of the dispatch queue; it also moves a batch of requests taken from the sorted queue, starting from the request following the expired one. The length of this batch is longer if the requests happen to be physically adjacent on disks, shorter otherwise.

Finally, if no request is expired, the elevator dispatches a batch of requests starting with the request following the last one taken from the sorted queue. When the cursor reaches the tail of the sorted queue, the search starts again from the top ("one-way elevator").

Which elevator to choose to improve disk IO performance?

The noop scheduler, which just pushes data quickly toward the hardware, can improve performance if your hardware has its own large cache to worry about.

On desktop systems with little I/O capacity, the anticipatory schedule can be helpful to make the most of the underlying disk(s) by better sorting read and write requests into batches. It's unlikely to be suitable for a typical database server.

The other two options, CFQ and deadline, are impossible to suggest specific use cases for. The reason for this is that the exact behaviour depends on both the Linux kernel you're using and the associated workload. There are kernel versions where CFQ has terrible performance, and deadline is clearly better because of bugs in the CFQ implementation in that version. In other situations, deadline will add latency exactly the opposite of what people expect when the system has a high level of concurrency. And you're not going to be able to usefully compare them with any simple benchmark. The main differences between CFQ and deadline only show up when there are many concurrent read and write requests fighting for disk time. Which is optimal is completely dependent on that mix.

Anyone who tells you that either CFQ or deadline is always the right choice to improve disk IO performance doesn't know what they're talking about. It's worth trying both when you have a reasonable simulation of your application running, to see if there is a gross difference due to something like a buggy kernel. Try to measure transaction latency, not just average throughput, to maximize your odds of making the correct choice here.

Lastly I hope the steps from the article to improve disk IO performance on Linux was helpful. So, let me know your suggestions and feedback using the comment section.

In my next article I will share the steps to change the active IO scheduler in Linux.

1 thought on “How to improve disk IO performance in Linux”