Getting started with Golang Gopher

Here are some images of Gopher:

In this post we’ll talk about its origins, evolution, and behavior.

The gopher first debuted as a promotion for the WFMU radio station in New Jersey some 15 years ago—long before the Go project. Renee French was asked to create a T-shirt for a yearly fundraiser, and the gopher was the result.

The gopher then made an appearance at Bell Labs, serving as Bob Flandrena's mail system avatar. Ken, r, rsc, and other users' avatars were made from further Renee designs.

Renee offered to create the Go project's logo when developers first required one. It was displayed on the Google Code website and the original Go T-shirt.

Renee suggested changing the WFMU gopher to serve as the mascot for the open source debut in 2009. Then the Gopher was created. The gopher is known only as the "Go gopher" and has no name: 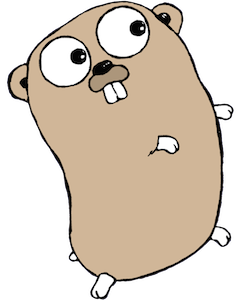 The plush gophers are produced by the GO teams in preparation for the Google I/O 2011 debut of the Go App Engine runtime. The gopher was now blue and had a three-dimensional appearance for the first time. The initial prototype had some hair but second version look better: 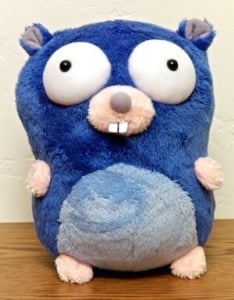 Gopher around the world

The gopher therefore exists in many forms, but has always been Renee’s creation. Here are some gopher adaptations that have been used as mascots for user groups and other organizations: They're cute, and we like them, but according to Creative Commons guidelines, the groups must give Renee credit, perhaps through a mention on the user group's website.

The designs for the vinyl and plush gophers are trademarked; accept no substitutes! But how do you go about getting one? Their natural habitat is near dense populations of Go programmers, and their global population is increasing. They can be purchased from the Google Store, though supply is variable. (These elusive creatures have been spotted in a variety of settings.)

Possibly the best way to obtain a gopher is to catch one in the wild at a Go convention. There are some Go conferences in 2022/2023 are listed:

In today's post,  I have introduced gopher's origin and evolution. The model sheet was first shown in a talk by Renée at Gophercon in 2016. You can refer tho this guide to design a gopher yourself: