We are going to learn how to arrange your Go code into reusable packages, import packages, export functions, types, and variables to other packages, and install third-party packages in this tutorial.

When working with a programming language, due to the limitation of available libraries, we are bound to write our own library or at least use someone else's library. The DRY principle, which essentially states that you should never write the same code again, is one of the guiding principles of high-quality software. As far as possible, you should reuse and expand upon existing code.

Because everyone has a different writing style, it makes it very difficult for everyone to use each other's libraries, and even within an individual version there are changes that make for the use of others is affected. To solve this problem, the community has a common standard for a library that is written in compliance with that community's library manager, for example, if you write Nodejs Package, you must adhere to npm rules, or if you write a library in golang then you must conform to the go module standards.

The most fundamental building blocks that enable code reuse are functions. The subsequent development in code reuse is the packaging. They assist in making Go source files modular, reusable, and maintainable by grouping comparable files into a single unit.

Go 1.11 and 1.12 include preliminary support for modules, Go’s new dependency management system that makes dependency version information explicit and easier to manage. This blog post is an introduction to the basic operations needed to get started using modules.

A module is a collection of Go packages stored in a file tree with a go.mod file at its root. The go.mod file defines the module’s module path, which is also the import path used for the root directory, and its dependency requirements, which are the other modules needed for a successful build. Each dependency requirement is written as a module path and a specific semantic version.

To make a directory the root of a module by using go mod init:

A package is only a directory inside your Go workspace that contains one or more Go source files or other Go packages. Every Go source file must belong to a package. The following syntax is used to declare a source file as a component of a package:

The first line of code in your Go source file must be the package declaration shown above. Your Go source file's defined variables, types, and functions all become a part of the declared package. The structs or functions that are exported from your package can be imported and used by other packages.

The following package appears in almost all of the code so far in our Golang articles:

fmt is a built-in package that implements formatted I/O with functions analogous to C's printf and scanf. The format 'verbs' are derived from C's but are simpler.

The benefits of package management

ALSO READ: Golang defer keyword - How & When to Use it?

There are two ways to import (external or internal) packages in Go:

The package name is the same as the import path's final component. As an illustration, rand is the name of the package imported as math/rand. Because it is nested inside the math package as a subfolder, it is imported with the path math/rand.

Package name convention; export structs, and functions in a package

By convention, packages are given lowercase, single-word names; there should be no need for underscores or mixedCaps. Err on the side of brevity, since everyone using your package will be typing that name. The package name is only the default name for imports; it need not be unique across all source codes, and in the rare case of a collision the importing package can choose a different name to use locally. In any case, confusion is rare because the import file name determines which package is being used.

When importing a package, you can only use its exported names (the ):

If we change to fmt.Println(math.pi) the output will be: .\packages.go:17:19: undefined: math.pi because pi is not an exported constant.

Here is an example of creating a sample Go project that has multiple custom packages and how to use the concept of package declaration, imports, and exports apply to custom packages.

Let's begin by entering the following commands to initialize a Go module:

Now let's build some source files and add them to various project packages. All of the packages and source files are shown in the following image: 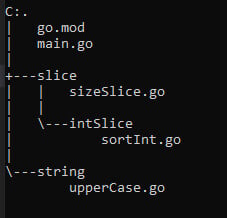 Here is the code inside every source file:

main.go (The main package: entry point of our program)

Now we are going to build our module to executable binary:

Let’s execute the binary file to run the program on Windows:

There are some things that should be noted here:

With Go modules, including third-party packages in your project is quite simple. Simply import the package into any source files in your project, and Go will download it for you the next time you build or run the project.

Here is an example of import gopkg.in/yaml.v2: the yaml package enables Go programs to comfortably encode and decode YAML values

We can use go get command to download 3rd party packages from remote repositories:

get downloads the packages named by the import paths, along with their dependencies. It then installs the named packages, like 'go install'.

The -f flag, valid only when -u is set, forces get -u not to verify that each package has been checked out from the source control repository implied by its import path. This can be useful if the source is a local fork of the original.

And now you can import and use this package: