In this task, we would like for you to appreciate the usefulness of the groupby() function of itertools. You are given a string  S. Suppose a character C occurs consecutively X times in the string. Replace these consecutive occurrences of the character C with (X, C) in the string.

For a better understanding of the problem, check the explanation.

A single line of input consisting of the string S.

Output Format
A single line of output consisting of the modified string.

All the characters of S denotes integers between 0  and 9.

Also, note the single space within each compression and between the compressions.

In this question, we will use the function groupby() of itertools module. For those of you who are not familiar with itertools, It is a module in python, it is used to iterate over data structures that can be stepped over using a for-loop. Such data structures are also known as iterables. This module incorporates functions that utilize computational resources efficiently.

ALSO READ: How to run shell commands in Python? [SOLVED]

The groupby() method of itertools goes through an iterable and groups values based on a particular key. Then it returns an iterator(stream of tuples). The first value of a tuple consists of keys, on which the items of iterable were grouped. And that is exactly what is being asked in the question.

Here we will try to solve the question using multiple ways, but we will stick to using the groupby() function as it is required in the question. 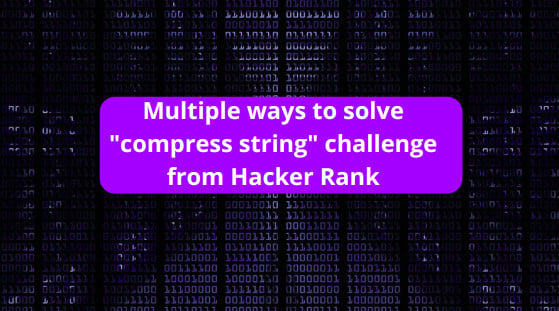 As you can see, the above code takes the string from the user.

In a similar way, you can provide any kind of string and it will give the desired output.

We will now create a Python function that will print out the required output. But before it, we have to import the groupby() from the itertools.

As you can see, we get the desired output result.

The __name__ variable (two underscores before and after) is a special Python variable. It gets its value depending on how we execute the containing script. Sometimes you write a script with functions that might be useful in other scripts as well. In Python, you can import that script as a module in another script.

In this section, we will use __name__ =='main', which runs blocks of code only when our Python script is being executed directly from a user. This is powerful as it allows our code to have different behavior when it's being executed as a program instead of being imported as a module.

As you can see, we again get the desired output.

In this short article, we solved the string compressed question from the Hacker Rank. We solved the challenge using multiple ways and you can pick any of these solutions.