In this tutorial we will learn about Python tuples data type.

What are Python tuples?

Below table shows a summary of the differences between each data types:

A tuple consists of a number of individual values, separated by commas (just like lists). As with lists, a tuple can contain elements of different types. You create a tuple by placing all of the comma-separated values in parentheses, ()

So here our tuple is placed under parenthesis () which we can check using type(). Although it is not mandatory, you can also create a tuple without using parenthesis

Here also the the type of our variable is tuple, output from this script:

The output version of a tuple will always be enclosed in parentheses, no matter which method you used to create it. This prevents confusion and allows us to better interpret tuples visually.

Similar to lists, we can use the index operator [] to access an element in a tuple by using its index. Tuple indices start at zero, just like those of lists.

As mentioned earlier, the first index of the tuple will start by 0 so to access the first element we use tuple[0]. Here is an example which will make this point more clear: 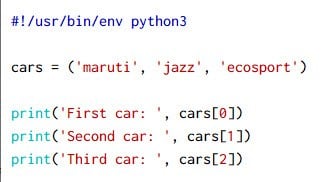 Now here the challenge would be accessing the last item of the tuple for which we have negative indexing value. 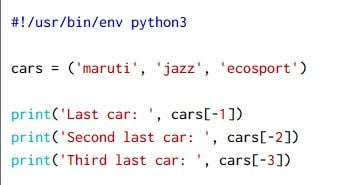 If you try to access an index that is not in the tuple. Python will raise an IndexError, as shown here:

Since cars tuple in my example contains only 3 index values, while accessing the 4th value we get IndexError

Next possible error scenario would be if you give a non-integer value with tuple index in which case you will get TypeError. Here in this python script example I am trying to access index value 2 of cars tuple but I have used single quote while providing the index value which will Python will read as string instead of integer.

As expected, cars['2'] due to the single quote is considered as string which is not allowed with index value hence we get TypeError

Syntax to use slicing operator

Slicing uses the slicing operator, :, and the general syntax is as follows:

All of these parameters are optional, and this is how they work:

In this example we will create a range of numbers from 0 to 10 wherein we will print only the even numbers. We had done similar exercise with range() by providing the start, stop and step up value, now we will do something similar but using tuples with slicing.

Here, we set the start index to 1 (the second element of the tuple) and the increment to 2, so that it skips one element every time.

Similarly we can create odd numbers from a range of numbers by slicing the tuple by using the default start index value i.e. 0 and using increment of 2

Here, we start at index zero (the first element of the tuple) and set the increment to 2, so that it skips one element every time.

Now we can also use slicing to access the content of tuple within a defined range. In above examples, we concentrated on the increment value, but if we remove increment value from the syntax then we can just provide a start and stop value which will print only the values from the provided range:

Here I would like to print the items between index value 4 and 7, output from this script:

Similarly we can also use negative index value which we learned earlier:

In this example we are using negative index value to access the tuple content between last index and 6th last value:

As I mentioned in the table under comparison of different data types, tuples are immutable or in layman's terms unchangeable which means you cannot modify the content of tuple.

Here I am trying to modify the content of index value 1 i.e. jazz with kwid, output from this script:

We get TypeError with this operation.

But there is a workaround 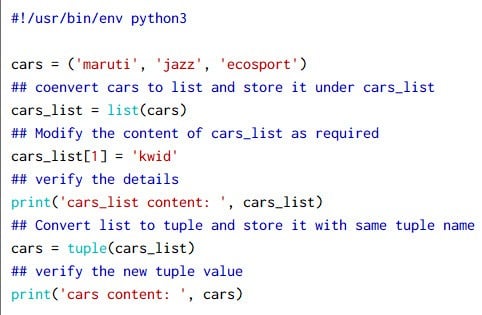 A tuple may also contain duplicate items unlike python sets. So you can use count() to check the number of occurrences of an item in a tuple. This is also the only bound method, as the syntax describes: tuple.count(element).

So we had two occurrences of maruti element in our cars tuple.

We can use min() to get the smallest element in the tuple. Here I have a tuple with a bunch of numbers:

Output from the script:

So our smallest element out of all the items in numbers tuple is 12.

Similar to min() we can use max() to access the largest item in the tuple. We will add one more line to our existing example to get the largest element using max()

So out of all the items part of our numbers tuple, 90 is the largest while 12 is the smallest. 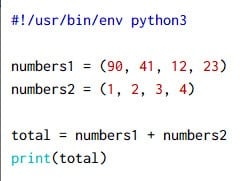 Example-5: Get the length of a tuple

We can use len() to get the count of all the elements present inside the tuple:

So there are total 4 elements in our tuple.

In this tutorial we learned all about Python tutples and different methods to access and modify the content of tuples even though it is immutable. We looked at the various methods that are available for tuple operations, and how to use them in practical applications.