In this tutorial, we will learn about Python sets, which are unique data structures with interesting properties.

What are Python sets

Below table shows a summary of the differences between each data types:

The first method to create a set is to use the in-built set() function. The function takes either an iterable (like a list or a tuple) or a sequence (lists, tuples, and strings are all sequences).

In this example I am converting different Python datatypes using set() function. Few things to NOTE in the output:

Since we know that the syntax of python set is items within curly braces so we can use curl brackets to create sets. I have used different type of examples in this example python script:

There are two methods to add items to sets, in this example we will use set.add() function. With set.add() you can only add one item at a time. 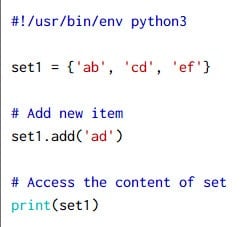 If you try to add more than one item then you will get TypeError:

If we have to add multiple items or a list of values to existing set then we can use update.set(). In this python script example I am adding items directly by using set.update() within curly braces and in the same script I will create a new set and append it to set1. 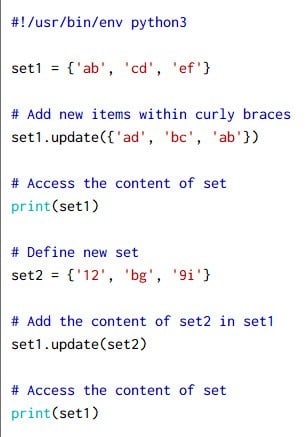 Since python set is iterable, we can use for loop to iterate over individual items of the python set.

We can use in operator to check for the presence of an item inside set. This will return boolean response i.e. True or False:

We have pop() in-built function which is used to remove and return an item from the set. Items are removed from the beginning of the set

We I execute the script multiple times, then the removed item is always different:

We can use remove() function to remove a single item from the set but not print it on the console. So we can silently remove any item from the Python set using remove()

You can also use the discard() method. For comparison, discard() does not raise a KeyError if the item to be discarded does not exist.

In this example, the provided key which I am trying to remove using discard() doesn't exist, so let's check the output:

So we don't get any errors on the console this time. To remove a positive content from the python set:

Method-4: Remove all the items from Python set

We can use clear() method to remove all of the data from the set object:

In particular, Python sets implement all the fundamental operations from set theory, like union, intersection, subset tests etc. With them, we can express algorithms in a more declarative way, avoiding lots of nested loops and conditionals

A union between sets is the set of all items/elements in both sets.

To achieve union between sets in Python, we can use the union method, which is defined on set objects: 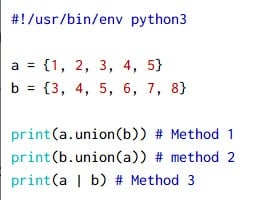 So there are three methods we can get union of two sets and all of them give us the same result.

An intersection of sets is the set of all items that appear in all of the sets, that is, what they have in common. The & operator or the intersection method can be used:

Let us have a script with some common and different data: 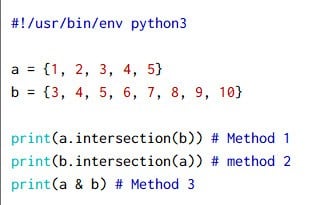 So we have the unique keys which are part of both the sets.

The difference between two sets is basically what is in one set and not in the other.

In this sample script we have two different sets and we will get the difference between both the sets under different scenarios: 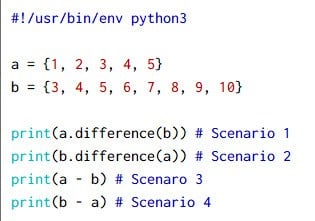 We have inbuilt function issubset() which can be used to check whether all of one set's elements exist in another set (that is, whether the set is a subset of another):

For example, in this script we know that all the keys from set a is part of set b but let's check this programmatically:

Compare the keys of different sets

We can use comparison operator to check if the sets contain same or different keys. It is not important that keys are in the same order as long as all the keys are present, for example here I have two sets defined with set of keys but in a different order and we will use if condition to check the content of both the sets: 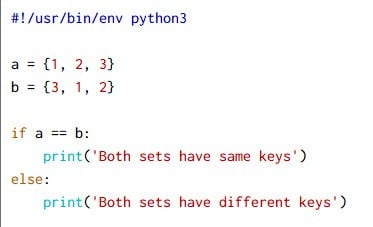 Similarly we can use != operator to check if both sets have different keys.

ALSO READ: How to slice dictionary in Python? [SOLVED]

Frozensets are essentially the combination of a set and a tuple. They are immutable, unordered, and unique. These are perfect for sensitive information like bank account numbers, as you wouldn’t want to alter those. They can be iterated over, but not indexed.

There is no special syntax to represent frozenset literals—they must be created by calling the constructor. The standard string representation in Python 3 looks like a frozenset constructor call.

In this tutorial we learned about Python sets and performing different kind of operation with set data type with examples. Now se know that sets are collections of unique and unordered items. We covered operations that you can perform on sets, such as finding unions and intersections, and other specialized operations, such as finding the difference and symmetric difference. We also looked at what frozen sets are, and the potential uses for them.