In this Python Tutorial we will concentrate on Regex. A regular expression is a pattern you specify, using special characters to represent combinations of specified characters, digits, and words.

I will cover the basics of different regular expressions in the first part of this tutorial, if you are already familiar with the basics then you can directly jump to Python RegEx section in this tutorial

A regular expression can be as simple as a series of characters that match a given word. For example, the following pattern matches the word “hat”; no surprise there.

Here’s the regular expression that implements these criteria:

The pattern ha+t therefore matches any of the following:

This was just an overview of regular expression, we will look into different meta characters which we can use with Python regex.

These are tools for specifying either a specific character or one of a number of characters, such as “any digit” or “any alphanumeric character.” Each of these characters matches one character at a time.

A caret sign ^ matches the beginning of the string.

ALSO READ: Python for loop in one line explained with easy examples

The dollar symbol $ is used to check if a string ends with provided expression.

You can add a set of characters inside square brackets which you wish to match.

The backslash can be used to “escape” special characters, making them into literal characters. The backslash can also add special meaning to certain ordinary characters—for example, causing \d to mean “any digit” rather than a “d”. We will learn about these special sequences later in this tutorial

The asterisk (*) modifies the meaning of the expression immediately preceding it, so the a, together with the *, matches zero or more “a” characters.

The plus (+) sign will match exactly one or more characters of the preceding expression.

This means that the preceding expression can be present zero or one times only. So this can be helpful when you feel a certain character in a string can be there or may be not.

Causes the regular-expression evaluator to look at all of expr as a single group. There are two major purposes for doing so. First, a quantifier applies to the expression immediately preceding it; but if that expression is a group, the entire group is referred to. For example, (ab)+ matches “ab”, “abab”, “ababab”, and so on.

These are different set of pre defined special sequences which can be used to capture different types of patterns in a string.

Here I have consolidated all these special sequence and different examples to give you an overview on individual operator:

One of the most common search tasks is to find all substrings matching a particular pattern. The syntax to use findall would be:

Here in this syntax, pattern is a regular-expression string or precompiled object, target_string is the string to be searched, and flags is optional. The return value of re.findall is a list of strings, each string containing one of the substrings found. These are returned in the order found.

Example-1: Find all the digits in a string

In this example we will search for all digit in the provided string.

Here we are using \d operator with re.findall to find all the digits and '\d+' means to match all digits present one or more times from the provided string. Output from this script:

In this example we will write a sample code to find all the words with 6 or more than 6 characters from the provided string using re.findall.

Here we are using re.findall with \w to match alpha numeric character in combination with {6, } to list words with minimum 6 letters or more. Output from this script:

Example-3: Split all characters in the string

We have a string which contains mathematical operators but we want it to be recognized as strings and each character should be broken down into a list of strings. 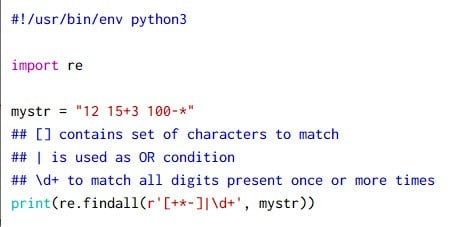 Here we are using re.findall to get a list of strings with individual characters from the provided text. Output from this script:

HINT:
The minus sign (-) has a special meaning within square brackets unless it appears at the very beginning or end of the range which is why we have placed it accordingly in our sample code.

Example-4: Find all the vowels from the string

In this example we will identify all the vowels from the provided string: 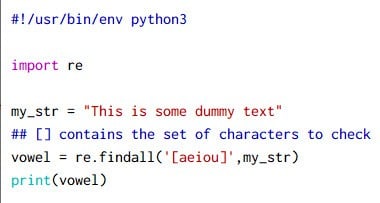 In the last example we listed the vowels from a string but that was case sensitive, if we had some text with UPPERCASE then they won't be matched. To perform case insensitive match we need to add an additional IGNORECASE flag using flags=re.I or flags=re.IGNORECASE 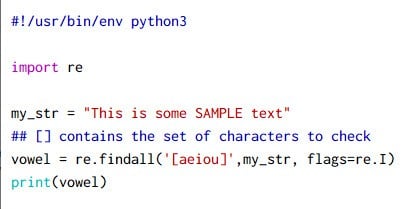 Another way to invoke regular expressions to help analyze text into tokens is to use the re.split function. The general syntax to use re.split would be:

In this example we will create a list of elements using whitespace as stripping pattern. We will take the output of who command into a file who.txt

Now using our python script we will strip each element into a list.

We have defined \s\s+ which means at least two whitespace characters with an alteration pipe and \t to match tab. Output from this script:

Now at the end of each line we are getting a newline character, to strip that we can use rstrip(\n) so the updated code would be: 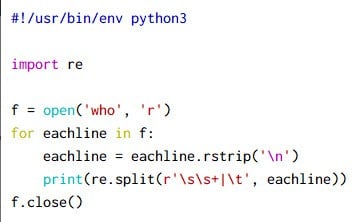 Another tool is the ability to replace text—that is, text substitution. We might want to replace all occurrences of a pattern with some other pattern. This almost always involves group tagging, described in the previous section.

In this syntax, find_pattern is the pattern to look for, repl is the regular-expression replacement string, and target_str is the string to be searched. The last two arguments are both optional.

The return value is the new string, which consists of the target string after the requested replacements have been made. 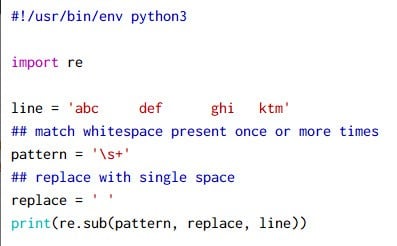 In this example I have a string with multiple duplicate words which I wish to replace with single occurrence of each duplicate word. 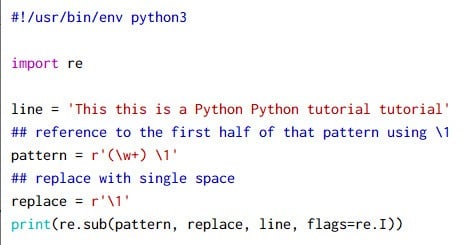 Second, the repeated-word test on “This this” will fail unless the, flags argument is set to re.I (or re.IGNORECASE).

HINT:
Python string handling attaches a special meaning to \1; therefore, if you don’t specify the replacement text as a raw string, nothing works—unless you use the other way of specifying a literal backslash \\1

In this section we will learn how to find the first substring that matches a pattern. The re.search function performs this task using following syntax:

In this syntax, pattern is either a string containing a regular-expression pattern or a precompiled regular-expression object; target_string is the string to be searched. The flags argument is optional and has a default value of 0.

The function produces a match object if successful and None otherwise. This function is close to re.match in the way that it works, except it does not require the match to happen at the beginning of the string.

By default re.search will search into complete string and will print only the first matching pattern. Let us verify this concept, here I have a text which contains 'python' two times. So we will use re.search to find 'python' word in the sentence.

As you see the re.search function has stopped searching after first match i.e. 'python' even when 'python3' was also a match for our pattern.

If you observe the output from re.search, we get a bunch of information along with the matched object. To further optimize the output and get the desired information we can use match object group with re.search

Here I am printing different information based on the output from re.search using the index position. Output from this script:

Example-1: Search for a pattern in a log file 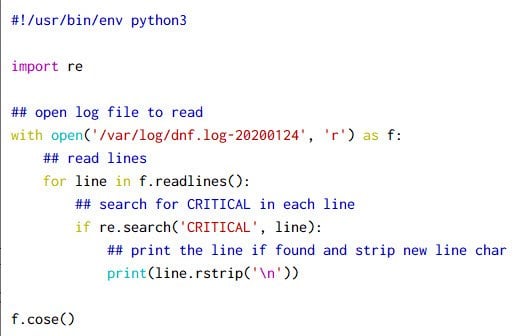 The re.match function returns either a match object, if it succeeds, or the special object None, if it fails. The syntax to use re.match would be:

Returns an appropriate match object when a substring of s, starting at index start and not reaching as far as index end, matches r. Otherwise, match returns None.

Let us use our example from previous section where I have added an additional python if else block:

Here now instead of re.search we will use re.match to find our pattern in the provided string. Output from this script:

Now even though we have python in our string, re.match returns "No match found", this is because re.match will only search at the first index position. So to get a match we will rephrase our text in the script:

Example-1: Match for a telephone number

In this example we will collect telephone number from the user and using re.match we will confirm if the syntax of the input number is correct or incorrect. Normally in US, the telephone syntax is: 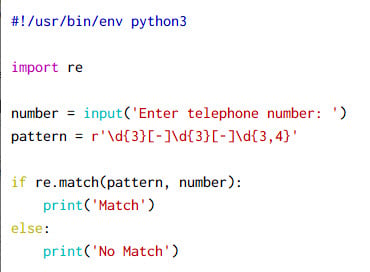 Output from this script for different inputs:

If you’re going to use the same regular-expression pattern multiple times, it’s a good idea to compile that pattern into a regular-expression object and then use that object repeatedly. The regex package provides a method for this purpose called compile with the following syntax:

You will understand better with this example. Here I have used some of the python regex function which we learned in this tutorial. Now if you see we had to use the same pattern multiple times for different regex search so to avoid this we can create a regex pattern object and then use this object to perform your search.

Python regex is a very vast topic but I have tried to cover the most areas which are used in most codes. re.search and re.match can be confusing but you have to remember that re.match will search only at the first index position while re.search will search for the pattern in entire string.

We mostly end up using re.compile, you could perform these tasks without precompiling a regular-expression object. However, compiling can save execution time if you’re going to use the same pattern more than once. Otherwise, Python may have to rebuild a state machine multiple times when it could have been built only once.