Python requests library is a powerful tool and a simple way to make HTTP requests to APIs. Python requests are very important for REST APIs and web scraping. Python provides built-in functions for making requests and responding to the request.  We will start this tutorial from the very beginning.

In this article we will cover

Moreover, this tutorial will also cover inspecting data, authenticating and responding to requests

Requests is a very powerful Python library having many built-in functions. It allows us to send HTTP/1.1 requests using Python. With it, we can add contents like headers, form data, multipart files, and parameters via simple Python libraries. Moreover, It also allows us to access the response data of Python in a similar way. It plays an important role while dealing with REST APIs and web scraping.

Installation of the request depends on the type of operating system. But the basic command in python for installing any library is using pip. Use the following commands to install requests on your system.

OR alternatively you can clone the public repository by using the following command.

Once we have a copy of the source, we can then embed it in our own Python package, or install it into our site packages easily using the following commands.

Once it is installed successfully into our system, we can use keyword import to get access to its functionalities.

The Python request module has many powerful built-in functions to make HTTP requests to specific URLs. For example GET, POST, PUT, HEAD and PATCH requests.  Requesting HTTP means either to get data from a specified URL or push data to the server. It is simply working as a request and response between client and server. In the following sections, we will discuss each type of request in more detail.

GET request in Python

As the name suggests, GET method is used to retrieve data from a given URL. The GET method sends the encoded user information appended to the page request. The page and the encoded information are separated by the ‘?’ character.  request.get() function is used, see the following example to understand the syntax.

POST method is a request supported by HTTP. This method requests the webserver to accept the data enclosed in the body of the request usually to store it. This method is often used when uploading a file or image.

The PUT request in Python

Python requests module have a built-in function put() which is to make put request to a specified URL.In this example we will make a PUT request and check the status of our request.

This means the following operation is NOT ALLOWED on the given URL.

The HEAD request in Python

The HEAD method asks for a response in a similar way to that of a GET request, but without the response body. This is useful for retrieving meta-information written in response headers, without having to transport the entire content.

Python requests module has a built-in function head() to make a request to the specified URL.

See the example below. We can check the status of our request and if we get 200 that means our request was successful.

The PATCH request in Python

The PATCH request only needs to contain the changes to the resource, not the complete resource. This resembles PUT, but the body contains a set of instructions describing how a resource currently residing on the server should be modified to produce a new version.

Python requests module has a built-in function patch() send a request to the specified URL. See the example below.
We can check the status of our request.

A response object contains all the data sent by a server in response to our request. Response is a very powerful object having many built-in functions which helps us to play with the data. See the following examples which show some of the functionalities of response objects. We had already touched this topic making requests in the section above. In this section we will look more closely.

Let’s make a request and store that in a variable known as response so that we can more information about the request using response.

The very first and basic information that we can get from response is the status of code. This will tell us whether our request was successful or not.

For example, if it returns 200 that means the request was successful, 404 means the resource that we are looking for was not found. And there can be many other scenarios as well.

Let's take an example of a request and see if the request was successful or not.

Which means the request was successful.

Sometimes we might want to return something else instead of 200 when the request is successful. We can achieve this by using if else statements. See the example below:

Now keep in mind that the range of status codes for 200-400 also shows the success of requests in a sense that they also return useful info. For example 304 means NOT MODIFIED and 204 means NO CONTENT, although the request is successful but there is no content to return.

So, make sure you use this convenient shorthand only if you want to know if the request was generally successful and then, if necessary, handle the response appropriately based on the status code.

Here is another way to handle unsuccessful request using exception handling. we can do this using .raise_for_status(). See the example below:

The methods that we used for requests ( usually the get() ), often contain valuable content. We can always get access to the content using different methods of response. There are many different formats to see the content.

For example see the example below which prints the content in bytes format. 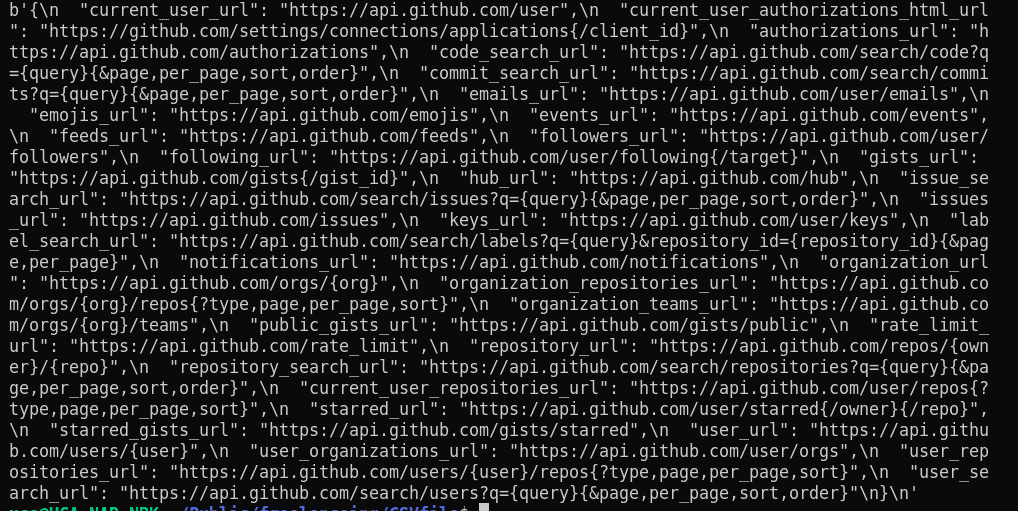 the  response.content gives us access to the content in bytes. We can convert this into string characters. See the example which prints out the content in string format. 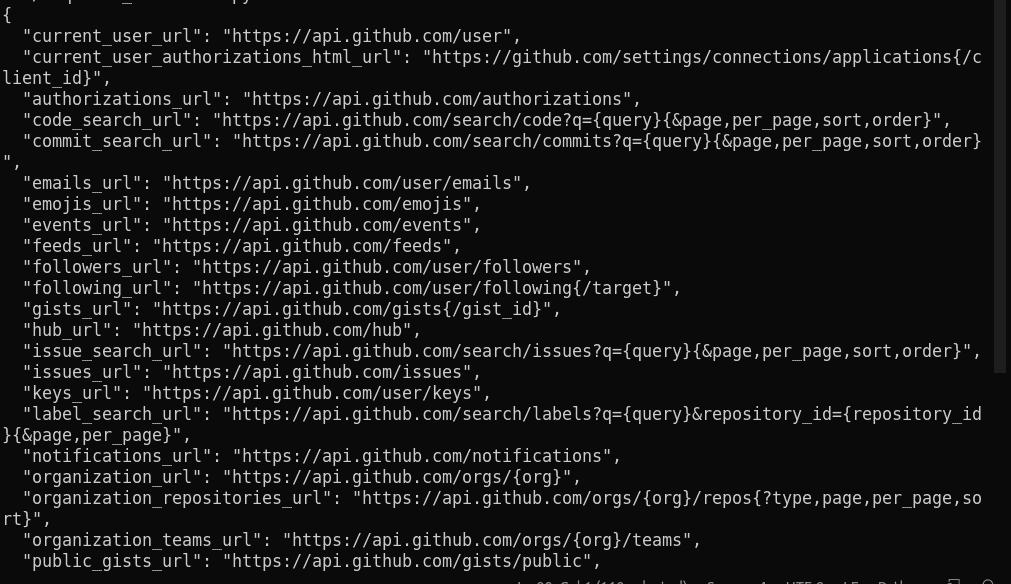 The response headers give us useful information, such as the content type of the response payload and a time limit on how long to cache the response. We use response.headers to view these headers.

response.headers returns a dictionary-like object, allowing us to access header values by key. There is something special about this dictionary-like headers object. The HTTP spec defines headers to be case-insensitive, which means we are able to access these headers without worrying about their capitalization.

According to the HTTP specification, POST, GET  and  PATCH requests pass their data through the message body rather than through parameters in the query string. We can use requests to pass payload to the corresponding function’s data parameter. And data takes a dictionary, a list or tuples , a file like object or bytes.

For Example, we can send the content in the form of a dictionary. See the example below:

We can also send the same data in the form of a list containing tuples.

For example see this example.

We can access headers and cookies that servers send back to us r.cookies and r.headers. At the same time we can send our own custom cookies and headers using requests in Python. In the following sections we will discuss how we can customize sending requests in python.

To add HTTP cookies to a request, we can simply pass them in a dict to the cookies parameter.

See the example below which demonstrates how to send cookies and headers. We can print out cookies using r.content.

See the example below. We can use r.content to print headers.

The requests library prepares the request before actually sending it to the destination server.  These preparations include  validating headers and serializing JSON content.

We can view these preparations using requests. See the example below:

We can also inspect the URL as well.

Authentication means giving access to a particular resource. Since everyone can’t be allowed to access data from every URL, one would require authentication primarily. We can achieve this by providing authentication data through an authorization header or a custom header defined by the server.

This is the simplest form of authentication to the server. We need to import the HTTPBasicAuth class from the requests library. See the following example which demonstrates how it works.

This is another way of authentication on request. We have to import HTTPDigAuth class from requests to get access to this authentication.

We can check the performance of our request through accessing different methods. For example by checking the time out, session object or retry limits. In this section we will discuss timeout and session objects.

When we make a request to an external server, our system waits for the response from the external specified server. If our application waits too long for that response, requests to our service could back up, user experience could suffer, or our background jobs could hang. By default, requests will wait indefinitely on the response, so we have to specify a timeout duration to prevent these things from happening. To set the request’s timeout, we use the timeout parameter. timeout can be an integer or float representing the number of seconds to wait on a response before timing out.

The Session object allows you to persist certain parameters across requests. It also persists cookies across all requests made from the Session instance. For example, if we want to use the same authentication across multiple requests, we can use a session. Each time we make a request with session, once it has been initialized with authentication credentials, the credentials will be persisted.