In this tutorial we will learn about python functions and it's usage covering different scenarios and types.

1. Why use Python functions?

2. Different types of functions in Python

The three main types of functions in Python are as follows:

The Python interpreter has a number of built-in functions and types that are always available. These are called built-in functions, and they can be used anywhere in your code, without the need of any importation.

We have already used multiple in-built functions throughout out Python tutorial such as print(), sorted(), type() etc. To get the complete list of python built-in functions you can check the official python page.

As the name suggests, these are functions that are written by the user, to aid them in achieving a specific goal. The main use of functions is to help us organize our programs into logical fragments that work together to solve a specific part of our problem.

The structure of a function is very simple but very important.

To create a function, start a new line with def (short for definition) followed by a space, and then a name of your own choosing followed by a pair of parentheses with no spaces before or inside. Then put a colon at the end of that line.

Here I have created a simple function to add two integers: 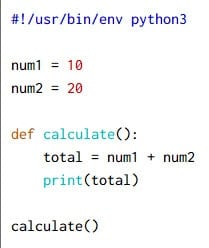 This is a very simple function where we have defined global variables num1 and num2 which are used within the function to add both the numbers and store the value in total. Next we print the value of total variable. Lastly we call the function by using the function name calculate()

NOTE:
Indentations count big time in Python. There is no command that marks the end of a function. All indented lines below the def line are part of that function. The first un-indented line (indented as far out as the def line) is outside the function.

There will be times that your function needs to return one or more values. We use the return keyword to do this. Without a return statement, every function will return None.

In this example script I am passing two values to the function (don't worry we will cover this part in detail later in this tutorial) and later we will just return those values. When we call the function, we assign two variables (a and b) to hold the two returned values. 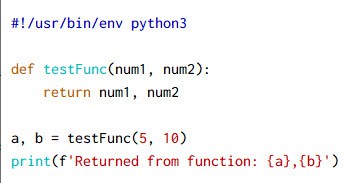 4.4 Passing arguments or parameters to function

Parameters are the information that need to be passed to the function for it to do its work. Although parameters are also commonly referred to as arguments, arguments are thought of more as the actual values or references assigned to the parameter variables when a function is called at runtime.

ALSO READ: How to create, read, append, write to file in Python 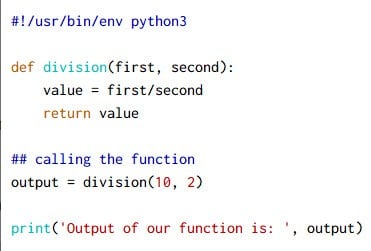 Now here I have provided the input arguments in the order which it was expected where the first value is then dividend while second number is the divisor.

But what if we switch the position of both arguments? 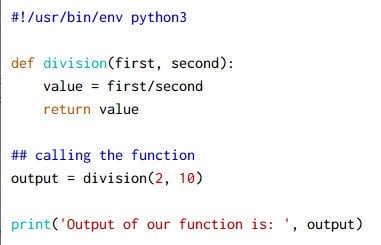 So it is important that we pass the arguments to the function in the same order as it will be used within the function.

Actually if it is necessary that you call all of the parameters in the right order, you can use keyword arguments in your function call. You can use these to identify the arguments by their parameter names.

In this example I have defined the keywords while passing the arguments to the function, so even if I switch the order it wouldn't matter as the values are assigned to the keyword itself. 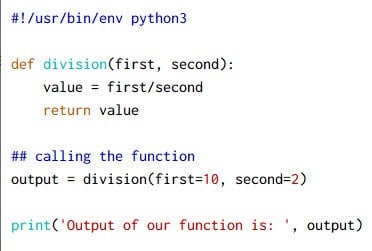 Keyword arguments are very powerful, and they ensure that no matter which order we pass arguments in, the function will always know which argument goes where.

Default arguments are those that take a default value if no argument value is passed during the function call. You can assign this default value with the assignment operator = as we have done in this example script. Here we are passing single input argument to our function for first, while for second we have assigned a default value already. 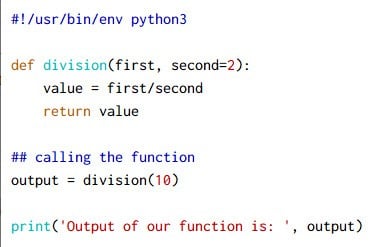 Note that even if the argument named second has a default value, you can still pass a value to it, and this passed value will override the default value. This means that the function will promptly ignore the default value and use whatever value you passed to it.

In this example I have used keyword argument to assign second=5 while I already have assigned a default value second=2. In such case, the argument which is passed to the function i.e. second=5 will take precedence. 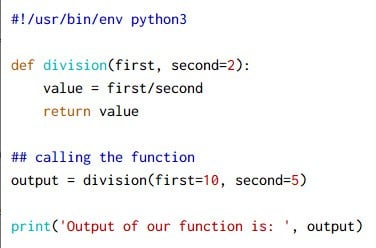 Whatever you pass in becomes a tuple named args inside the function. 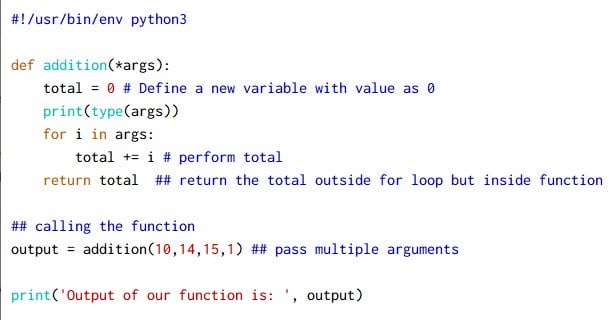 As you can see the arguments passed to the function are added as Tuple. Please NOTE that here I have used <strong>*args</strong> but you can use any other name such as <strong>*numbers</strong>

The syntax of an anonymous function is as follows:

5.1 When should I use lambda function?

Let me start from the basics to help you understand the concept.

Here I have a small script where I wish to sort the strings part of names list. Now strings are sorted alphabetically so I would expect the output sorted in A-Z format:

Here Avni and Ravi are printed in proper order but other strings starting with lower character are placed near the last of the list i.e. amit and bhavin even though alphabetically they should be first in the list

We can use str.transform() to transform the case and then perform the sorting

The output contains lowercase first now but it is still not properly sorted:

Now we can't use key=lower in the sort() parentheses because lower() isn't a built-in function so we can create a function which will transform the case of all the elements part of out list and use this function as key to transform the case and then perform the sorting. 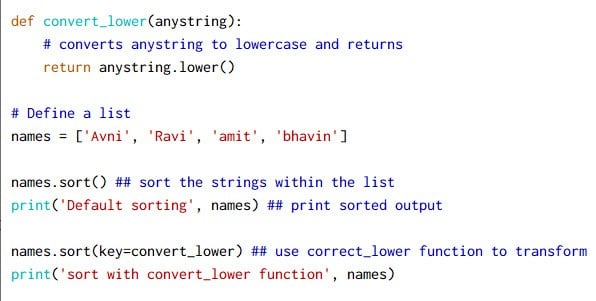 Here our function convert_lower will take single input argument and store it in anystring which will be transformed into lowercase. Running this code to display the list of names puts them in the correct order, because it based the sort on strings that are all lowercase. The output is the same as before because only the sorting, which took place behind the scenes, used lowercase letters. The original data is still in its original uppercase and lowercase letters.

Now we have solved the problem, we have not yet used lambda function?

There is no lambda function yet. But this is a perfect example of where you could use a lambda function, because the function you’re calling, lowercaseof(), does all of its work with just one line of code: return anystring.lower().

When your function can do its thing with a simple one-line expression like that, you can skip the def and the function name and just use this syntax:

Replace parameters with one or more parameter names that you make up yourself (the names inside the parentheses after def and the function name in a regular function). Replace expression with what you want the function to return without the word return. So in this example the key, using a lambda expression, would be:

Here is our final script:

You can use any variable instead of anystring in this example. Output from this script:

In this tutorial you learned all about python functions and how to create your own custom functions in Python. We covered how and where to apply the different types of functions, and how they can be used to help break your programs into smaller sub-programs that achieve a specific purpose. We also saw how the use of functions can help use reuse functionality in our code and avoid repeating the same blocks of code.