In this article we will learn how to keep programs running as long as users want them to. We will use Python while loop to keep programs running as long as certain conditions remain true. The while loop is used when you need your logic repeated until a certain condition is met, usually because you don't know how many times it will take. This could be because you are waiting for some condition to be met, like a timer expiring or a certain key press.

The for loop takes a collection of items and executes a block of code once for each item in the collection. On the other hand, the while loop runs as long as, or while, a certain condition is true.

The general syntax of while loop would be:

The while statement consists of a header line with a test expression, a body of one or more normally indented statements, and an optional else part that is executed if control exits the loop without a break statement being encountered.

Example-1: How to repeat python while loop a certain number of times

In this example we will write a code to repeat python while loop a certain pre-defined number of times. The general syntax to achieve this would be:

It is important that in such condition we increment the count in each loop to avoid repeating the same loop. Here I have an example script where we want the while loop to be run 5 times. So we take a variable "count" and assign the value as 1. Next we put a condition with while loop to run the loop as long as the value of count is less than or equal to 5. This was the loop will run exactly 5 times. It is important that we increment the value of count after each iteration ends.

ALSO READ: How to slice dictionary in Python? [SOLVED]

Example-2: How to exit while loop in Python based on user input

We can use input() function to collection some input from a user in Python programming language. Now this can be a repetitive task such as asking for password and unless both password attempt matches, the loop should continue to ask the user. 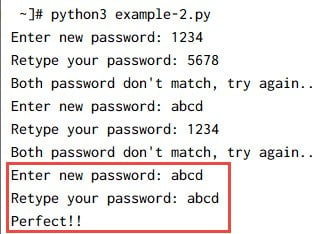 Example-3: Using python while loop with a flag

In the previous example, we had the program perform certain tasks while a given condition was true. But what about more complicated programs in which many different events could cause the program to stop running?

We can write our programs so they run while the flag is set to True and stop running when any of several events sets the value of the flag to False. As a result, our overall while statement needs to check only one condition: whether or not the flag is currently True.

Let's add a flag to our previous example, we will call this flag as active: 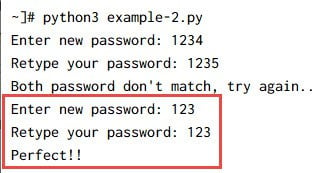 Example-4: When to use continue in a python while loop

Rather than breaking out of a loop entirely without executing the rest of its code, you can use the continue statement to return to the beginning of the loop based on the result of a conditional test.

For example, consider a loop that counts from 1 to 10 but prints only the odd numbers in that range:

First we set num to 0. Because it’s less than 10, Python enters the while loop. Once inside the loop, we increment the count by 1, so num is 1. The if statement then checks the modulo of num and 2. If the modulo is 0 (which means num is divisible by 2), the continue statement tells Python to ignore the rest of the loop and return to the beginning. If the num is not divisible by 2, the rest of the loop is executed and Python prints the current number.

Example-5: When to use break in a python while loop

I have already used break statement in one of my examples above. To exit a while loop immediately without running any remaining code in the loop, regardless of the results of any conditional test, use the break statement. The break statement directs the flow of your program; you can use it to control which lines of code are executed and which aren’t, so the program only executes code that you want it to, when you want it to.

For example here I have an infinite while loop where I ask user for some text input. Then the script will capitalize the first letter of the text unless user decides to quit by providing "q" as an input.

Here we read a line of input from the keyboard via Python’s input() function and then print it with the first letter capitalized. We break out of the loop when a line containing only the letter q is typed:

Example-6: How to use break with while and else condition in Python

If the while loop ended normally (no break call), control passes to an optional else. You use this when you’ve coded a while loop to check for something, and breaking as soon as it’s found. The else would be run if the while loop completed but the object was not found.

In this example script, we will look out for even numbers from a provided list of numbers.

Here also we are checking for a number divisible by 2 with 0 remainder. If no such number found then the loop enters else condition of while loop. Output from this script:

ALSO READ: How to find length of Set in Python? [SOLVED]

Example-7: How to use nested while loop in Python

Python allows you to nest loops. A nested loop is simply a loop that resides inside of another loop. There are lots of good reasons to use nested loops, from processing matrices to dealing with inputs that require multiple processing runs.

The syntax to use a nested while loop would be something like:

Suppose you are given the task of implementing a program that accepts a number from a user and then determines whether it is a prime number. The program also has to continue to accept values from the user until the user enters a zero.

Example-8: How to use python while loop with multiple conditions

In al the previous examples, we have defined a single condition with our python while loop. But it is also possible that there are multiple conditions to execute the loop. Here is one such example:

Here are some more syntax to understand the usage of multiple conditions in python while loop:

In this article you learned how to use python while loop to make your programs run as long as your users want them to. You saw several ways to control the flow of a while loop by setting an active flag, using the break statement, and using the continue statement. You learned how to use a while loop in nested format with examples and syntax. It is recommended to use the while loop with caution when using with endless loop. It is important that you use a counter and always increment the counter at the end of iteration.

The while statement in Python
break and continue Statements, and else Clauses on Loops