Getting started with NodeJS [Beginners Tutorial]

Getting started with NodeJS the right way empowers you to exploit the potential of NodeJS. This tutorial walks you through NodeJS overview, mainly focusing on imparting the mindset needed to fully and creatively apply NodeJS.

It would be be best to understand the JavaScript programming language, especially ES6 concepts like (promise-based or) asynchronous programming before following this tutorial. Next, install the latest version of Node.js and a code editor like Visual Studio Code.

Getting started with NodeJS by understanding its origin

The browser API communicates with the JavaScript engines like Spider Monkey (Mozilla) and V8 (Google Chrome). The engine then completes subsequent communications with the operating system till the process is complete and finally returns the output to the browser for display.

ALSO READ: How to make HTTP GET Request in Node.js [Practical Examples]

Getting started with NodeJS processes

The browser gives you asynchronous API, preventing you from blocking the single JavaScript thread. The entire API is wrapped in the window object and is accessible through child objects like the document.

Similarly, the (node) wrapper is bundled with functionalities to interact with the operating system.

Node attempts to mirror the browser API. Several APIs like setTimeout(), console.log(), and setInterval() work similarly in both the browser's window and Node's global object.

However, this time around, your JavaScript code does not manipulate HTML elements directly using the document object with its methods like querySelector() or getElementById().

You can see the libraries by entering the REPL and double-tapping the tab key. 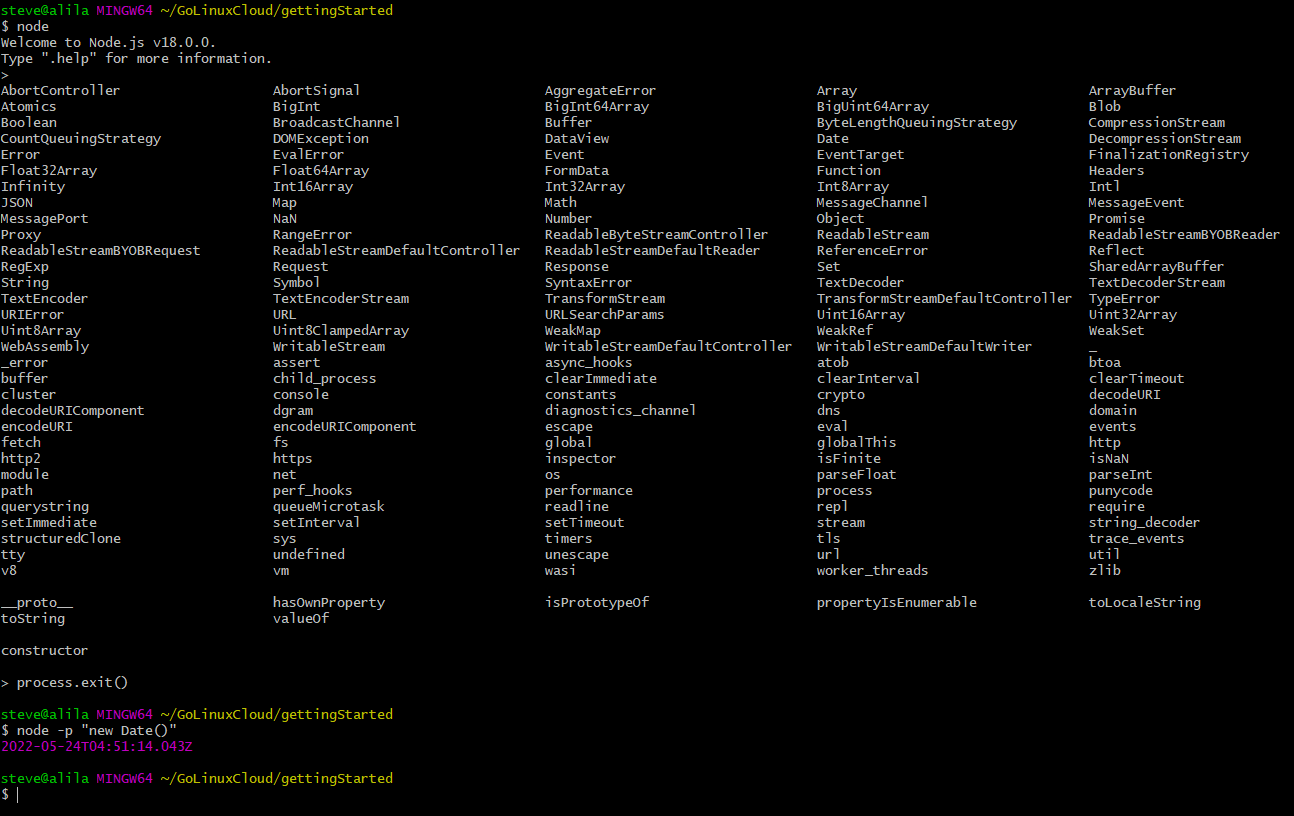 You can also use Node as a CLI tool. Check all you can do in Node as a command-line tool by typing node followed by the -h flag.

For example, you can execute commands and print the result using the -p flag. For instance, you could view the current date by running the following command.

What happens when you run a Node command?

The interface reads and writes into the operating system at the low level. At a high level, you write Node.js programs, which are sent to the process object. You can also change the behavior of Node by setting the environment variables.

You need a code editor to write commands. For example, I am using Visual Studio Code in this tutorial. Most code editors come with a terminal for viewing the program output.

Next, create a file ending in the .js extension and open it with the installed code editor.

We convert the output to a string because the write() method expects a string. Better yet, we can use the high-level console object with the log() method to print the output.

ALSO READ: How to use JavaScript Typed Array? [SOLVED]

Getting started with NodeJS modules

exports, an alias to module.exports, is a mutable object. Each file has a unique module.exports object that wraps the file's code, enabling you to create an interface between two files: exporting and importing files.

The file being exported and imported is called a module. There are three main types of modules in Node.js: built-in, installed, and custom modules.

Getting started with NodeJS built-in modules

Built-in modules come with Node.js upon installation. You can print the built-in modules by double-tapping the tab key or console-logging the limited _builtinLibs property of the repl module.

Some of the frequently used Node's built-in modules are:

Getting started with NodeJS installed and custom modules

You can install modules through the Node Package Manager (npm) or its alternatives like Yarn and Node Version Manager (nvm).

Lastly, you can create a custom module by writing a file and exporting the contents.

With the constantly changing Node versions, it is now possible to use the ECMAScript's import and export syntax in Nodejs.

You start by initializing your package as an NPM package.

Introduce the type key with the module value. This time around, you should introduce the .js extension when importing files.

__dirname returns the full path to the current folder hosting your (current) file. Use __filename instead to include the file name in the output.

Getting started with NodeJS packages

On initializing the NPM, a package.json file is created. A package describes the files you need for an installed module.

You can install or publish packages with NPM. Apart from managing the packages, NPX executes a package. The most immediate alternative to NPX and NPM is Yarn, whose uniqueness arises from its speed, consistency, and security.

The information in the package.json file determines the behavior of your package. Although the must-have contents of the file are package name and version, a standard package has scripts and dependencies.

Scripts control how to run commands. Some of the default scripts are start, build, and test. You can run them without the run command.

Otherwise, use the run command if you create a custom script.

Dependencies tell Node the (installed) packages used in your application. The package primarily meant for local development is called a dev dependency, and NPM references it under the devDependencies portion of the package.json file.

NPM decides the type and location of a dependency according to how you install the package. For example, the --save-dev flag, summarized as -D, saves a package under devDependencies.

Using the --global flag, summarized as -g saves the package in your system and is available for subsequent application(s) usage. Otherwise, the package lands in dependencies section.

The packages are semantically versioned.

Whenever you import a module with a path, Node.js searches for the module's existence and configuration in the node_modules folder.

You can delete the node_modules folder and reinstate the module's configuration by running the NPM install command.

NPM goes to its repository or GitHub to fetch all the data needed for the target package to function.

Lastly, you can delete a package using the NPM uninstall command.

After getting started with NodeJS, you should focus more on its core modules like fs, path, events, and http.

Next, learn how to create a web server with frameworks like Express.js as you continue exploring Nodejs libraries shown in this tutorial.