Golang vs Rust | Which language to choose in

Which language should I learn—Go or Rust? Rust or Go? is a common question among developer community. In today's post, we will look at the similar and different between Rust vs Go two primary and most used languages for enterprise development.

Go, commonly known as Golang, is an open-source, statically typed, compiled computer language created by Google. It is designed to be straightforward, powerful, readable, and effective.

The complexity of the codebases at Google led to the creation of the Go programming language. It was created by Robert Griesemer, Rob Pike, and Ken Thompson, who supposedly all despise C++. Go was originally made public in 2009 and became open source in 2012 with the release of its first version, 1.0.

Due to its simplicity, readability, efficiency, and concurrent nature, Go quickly gained popularity and became the preferred language among many developers. It can perform numerous tasks simultaneously if they are concurrent.

Go is used for cloud-based programming, game development, data science, and server-side (backend) programming. Making command-line tools is another common use for it.

Rust is a safe, multi-tasking (concurrency), structured programming language that supports functional programming (functional programming). Rust is blazingly fast and memory-efficient: with no runtime or garbage collector, it can power performance-critical services, run on embedded devices, and easily integrate with other languages.

Software developer Graydon Hoare created Rust as a personal project while working at Mozilla Research in 2006. Mozilla officially sponsored the project in 2009. Rust's major influences include SML, OCaml, C++, Cyclone, Haskell, and Erlang. Since the first stable release in January 2014, Rust has been adopted by companies.

In 2018, the Rust community decided to improve the programming experience for a few distinct domains:

Hundreds of companies around the world are using Rust in production today for fast, low-resource, cross-platform solutions. Software you know and love, like Firefox, Dropbox, and Cloudflare, uses Rust. From startups to large corporations, from embedded devices to scalable web services, Rust is a great fit.

In comparison to interpreted languages like Perl and Python, both languages are reasonably fast. In contrast to Go, Rust does make a number of design compromises in order to obtain the fastest execution performance. Go makes several run-time performance tradeoffs in order to optimize for simplicity.

The fastest Go code was at least 30% slower than the fastest Rust code for every algorithm that was tested by benchmark-game. 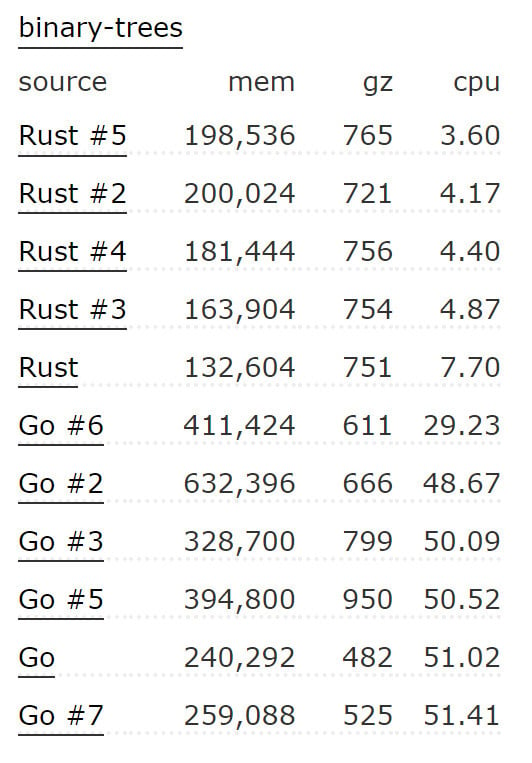 Both languages are excellent at scaling up to make use of numerous CPUs for concurrent data processing. Each piece of data can be processed using a goroutine in Go, and a waitGroup can be used to wait for them all to be finished. It is simple to iterate over a container in parallel in Rust thanks to the rayon crate.

As mentioned above, Go supports concurrency with goroutines. Using all of the CPU cores that are available, you can run each task as a separate process using Go's goroutines to maximize performance. Go's built-in functions include goroutines, but Rust only provides native async/await syntax to handle concurrency. As a result, when it comes to concurrency, Go has an advantage in terms of developer experience. Rust, however, does a much better job at ensuring memory safety.

Because of Rust's strong focus on eliminating memory-related security issues, programmers must take extra care to complete tasks that other languages, like Go. Go isn't insecure, though. For memory safety, Rust just so happens to reign supreme. Mistaken or unsafe memory access is one of the main causes of bugs and security flaws. To help developers avoid common memory safety issues, Rust provides a number of concurrency concepts.

Go was designed with simplicity. Its narrow feature set makes Go simple to learn. Besides that, Go offers an easier alternative to C++, hiding aspects such as memory safety and memory allocation. Rust adopts a different strategy and makes you consider ideas like memory safety. Rust is a less appealing language to learn because to the idea of ownership and the capability to pass pointers.

It's true that programming in Rust is harder and takes longer. Rust has a more difficult learning curve than Go overall. Furthermore, when it comes to concurrency, Go has the advantage in terms of developer experience.

Which language should you choose? Go or Rust

The question here is "What kind of application are you planning to create?". The issues you wish to solve with the language should be taken into consideration while choosing between Rust and Go because they are each optimized for various things.

The case for Go

The case for Rust

Based on an earlier survey, Golang is favored over Rust. As such, both are new languages and were purposefully created to make programming better. There is no perfect language, instead consider your conditions and criteria to choose between Rust vs Go.

Go works well for building web apps and APIs that utilize the microservices architecture while utilizing its built-in concurrency characteristics.

Rust can also be used to create web APIs, but this was not its intended application. The memory-safety emphasis of Rust increases complexity and development time, particularly for a relatively straightforward web API. However, the more control you have over your code, the more performant, memory-efficient, and optimized it will be.