Recently, I came across a question on “serverfault.com” about how to detect a rogue Install and Configure DHCP server in your network. There are some tools out there that can help, but the simplest method for me is to use Wireshark to detect the rogue DHCP server. Before a deep investigation, I would like to refresh your memory regarding how Dynamic Host Configuration Protocol (DHCP) works.

What is DHCP? and How does it work?

DHCP is a network management protocol that is enable us to dynamically configure a client. Assigning IP addresses dynamically through DHCP is just only one function of the protocol. A DHCP server uses DHCP options to provides information to its clients. Following screenshot shows the steps how to assign an IP address to the client. 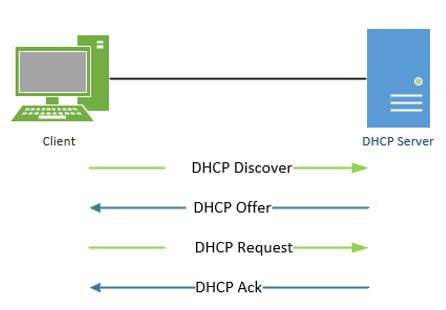 Step-1: The client sends a broadcast DHCPDISCOVER packet to the network, which contains an identifier unique to the client (typically the MAC address). The packet might also contain other requests, such as requested options (for example, subnet mask, domain name server, domain name, or static route).

Step-2:  When the server receives a DHCPDISCOVER packet from the client, the server chooses a network address for the requesting client and responses back to the client with a DHCPOFFER packet.

Step-4: The DHCP server acknowledges the client DHCPREQUEST for the IP address by sending a DHCPACK packet.

With this packet, a DHCP client broadcasts to locate available DHCP servers. As seen below, the packet includes the client Media Access Control (MAC) address, Host Name, Parameter Request List which is used by the DHCP client to request values for specified configuration parameters. 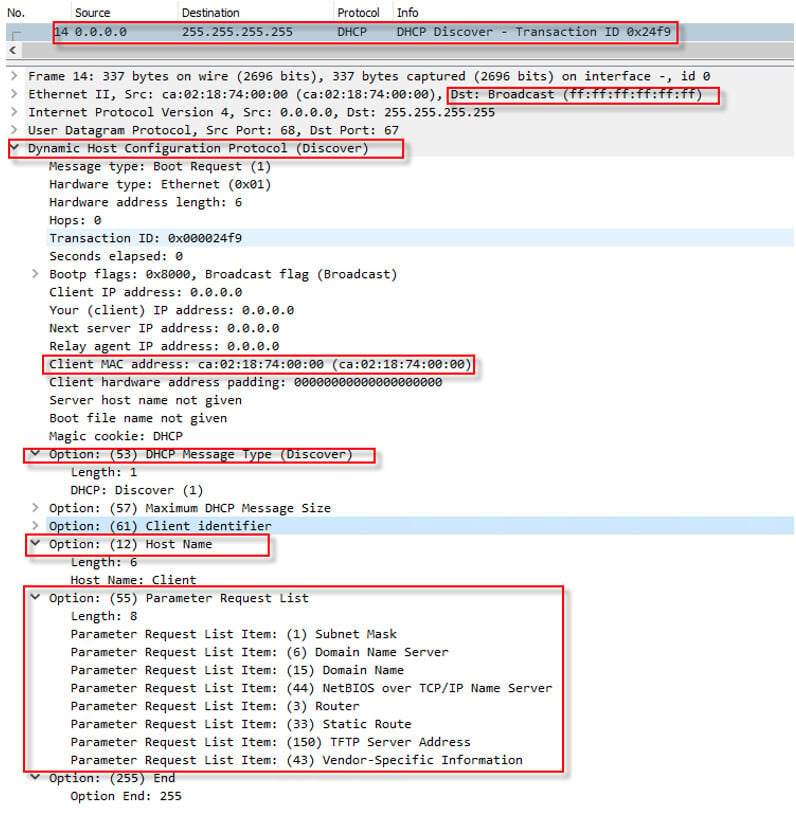 It is a DHCP server’s response to DHCPDISCOVER packet with offer of configuration parameters. 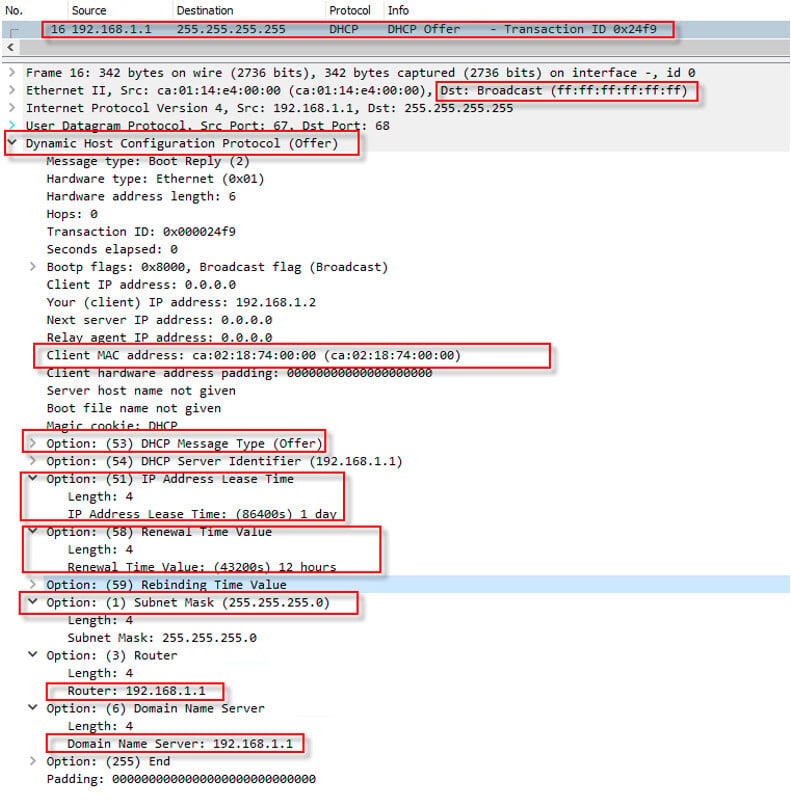 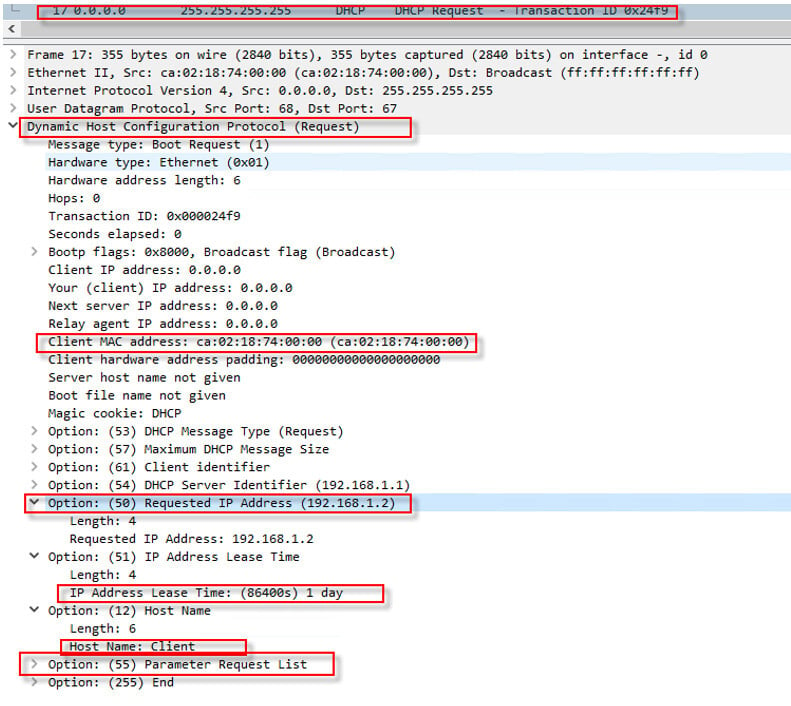 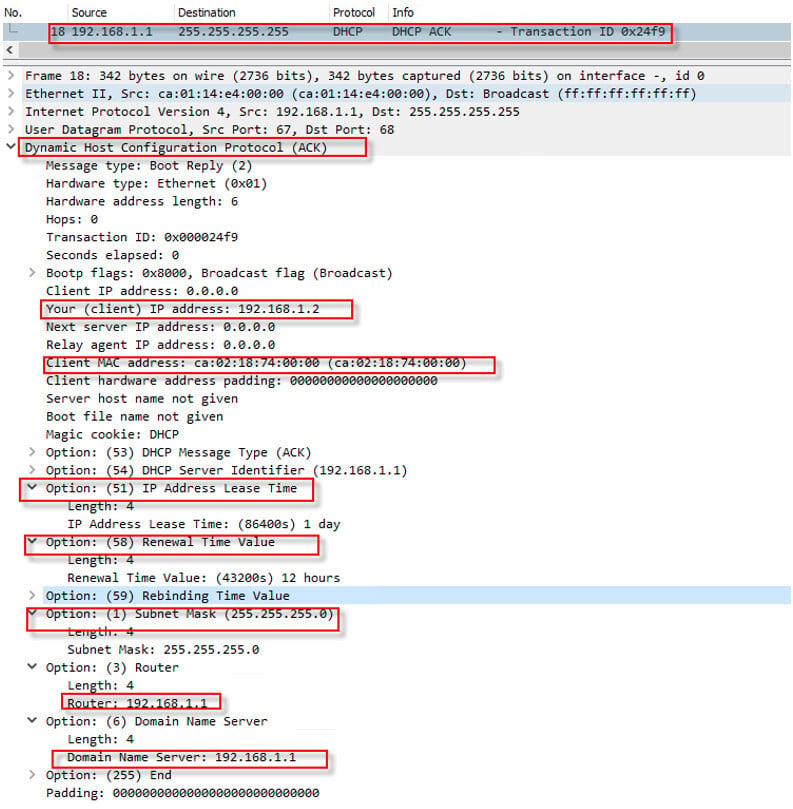 DHCP server sends this packet to client refusing request for configuration parameters (e.g., requested network address already allocated). Following screenshot shows the DHCPNAK packet coming from the DHCP server after attaching the client to a different network.  Before joining this new network, the client was assigned an IP address from 192.168.1.0/24 subnet. When the client was connected to the new network, it desired to keep its old IP address so it requested its old IP address from 192.168.1.0/24 subnet. Since the server was not configured for that scope (subnet), it did not handover the requested IP address and sent a DHCPNAK packet to the client. 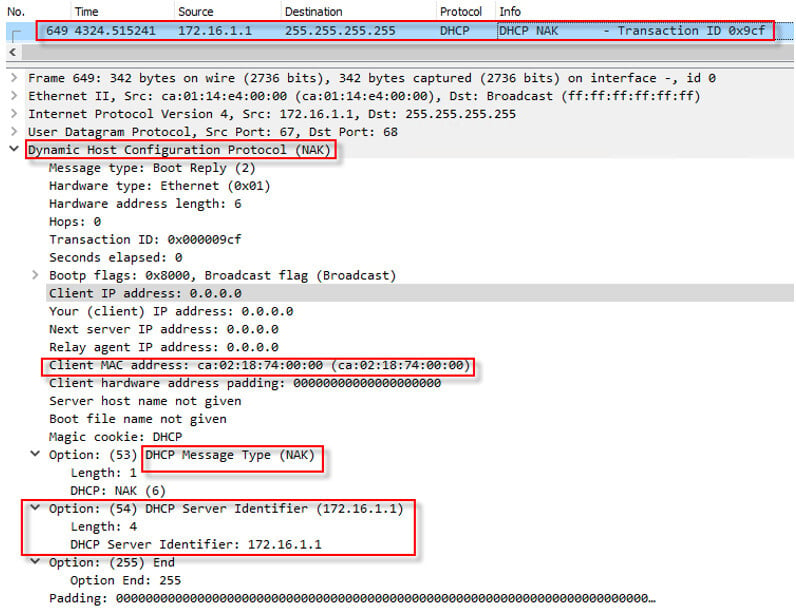 DHCP client sends it to server indicating configuration parameters (e.g., network address) invalid. It is mostly used when there is a conflict, which can be detected by either DHCP servers or clients to determine whether an IP address is already in use on the network before leasing or using the address. DHCP client computers running Windows that obtain an IP address use a gratuitous ARP request to perform client-based conflict detection before completing configuration and use of a server offered IP address. If the DHCP client detects a conflict, it will send a DHCP decline packet (DHCPDECLINE) to the server, and this will be evident in a network trace. The conflict is also can be detected by the server pinging the IP address before handing it over to a client. Following screenshot shows that the client found there was a conflict and notified the server with the  DHCP decline packet. 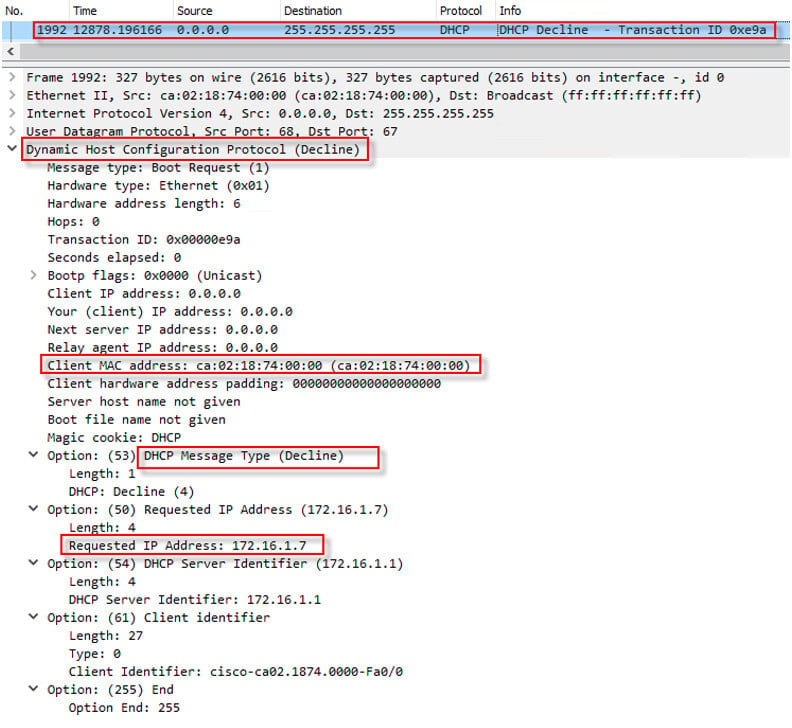 DHCP client sends this packet to DHCP server relinquishing network address and cancelling remaining lease. When you shut down your pc, you may release your IP address depending on your operating system. 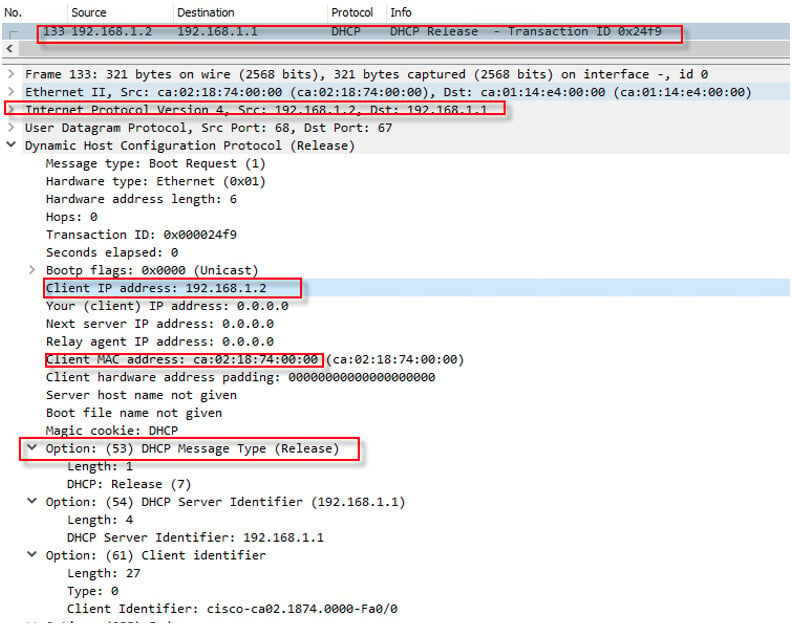 A DHCP Inform message is sent by a DHCP client to obtain other network configuration parameters such as the gateway address and DNS server address after the DHCP client has obtained an IP address. Assume that you have configured your IP address manually but you do not know information like domain name, dns suffix, TFTP server IP address etc. DHCP Inform can be used in the situations like that. Following figures shows that the client asked DHCP server for more information.

Assuming we have the topology below and we would like to find the rogue DHCP server and shut it down. 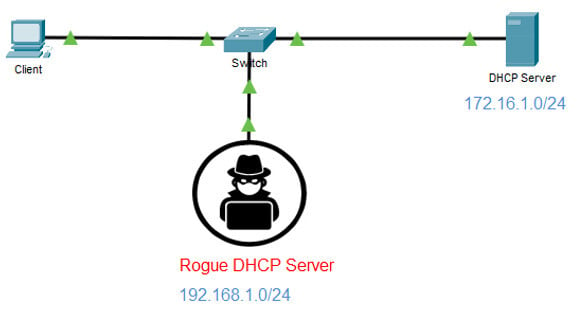 Step-1: Connect your computer to the network and launch Wireshark. We need to capture DHCP packets coming from the rogue DHCP server (attacker). If you have already an IP address, then open a command prompt/shell and perform “release” and “renew” command. After that your computer will send a DHCP discover packet like below. 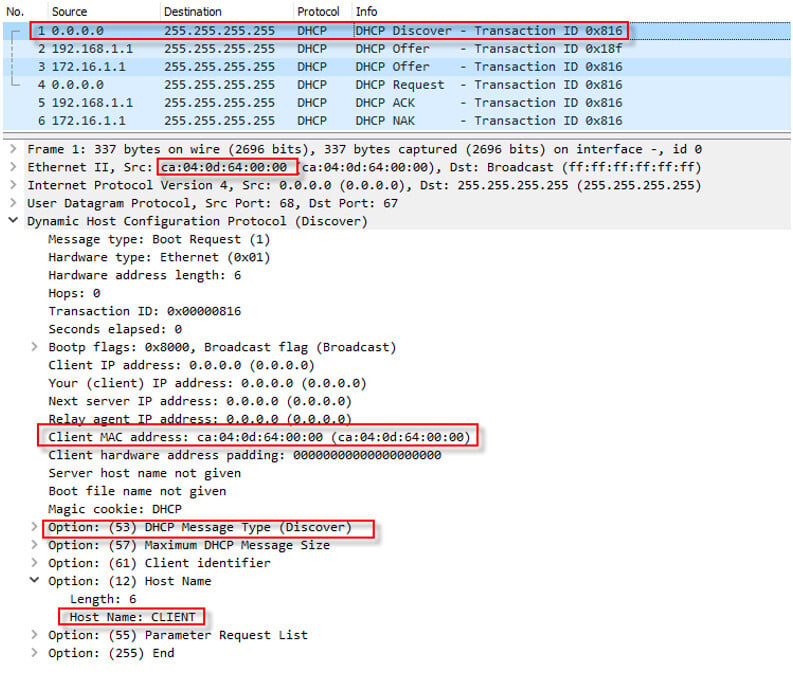 Step-2: In this step both of the DHCP server will send an offer. Our aim is to obtain the rogue DHCP server’s MAC address, which can be seen from its DHCPOFFER packet (ca:03:46:64:00:00). 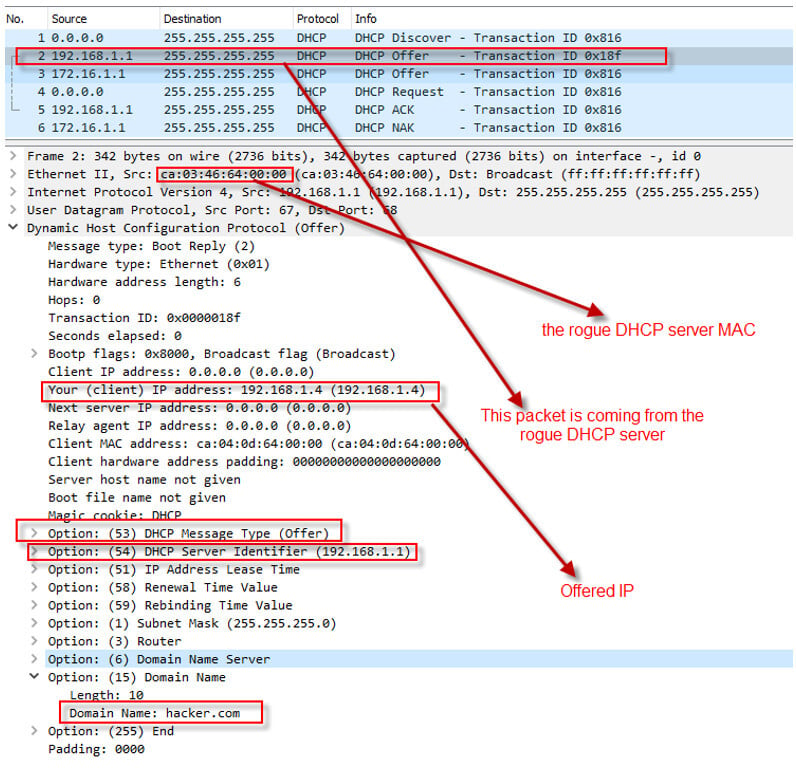 The authentic DHCP server also sends its DHCPOFFER, but it seems to be late. 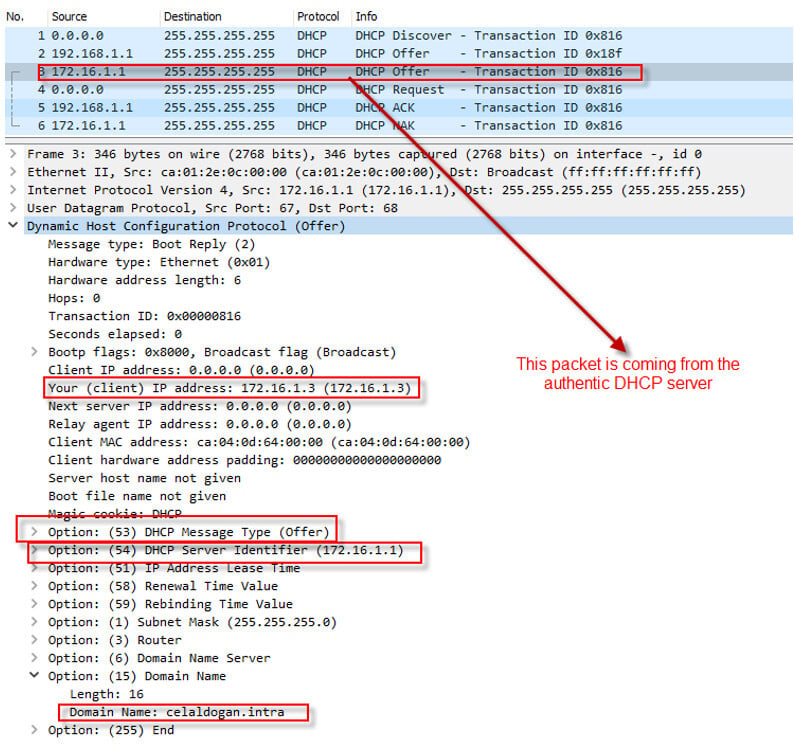 Step-3: The client accepts the rogue DHCP server offer and sends back a DHCPREQUEST packet. 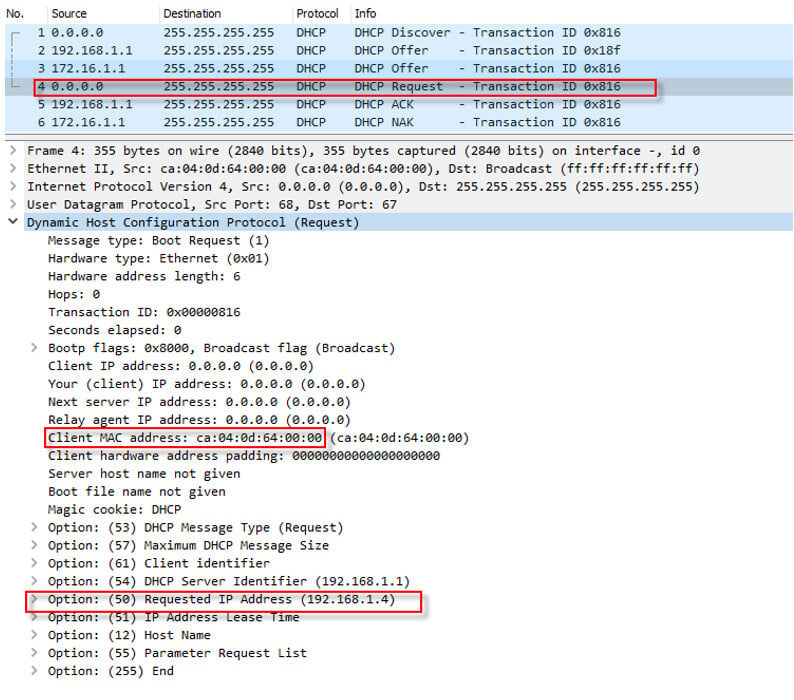 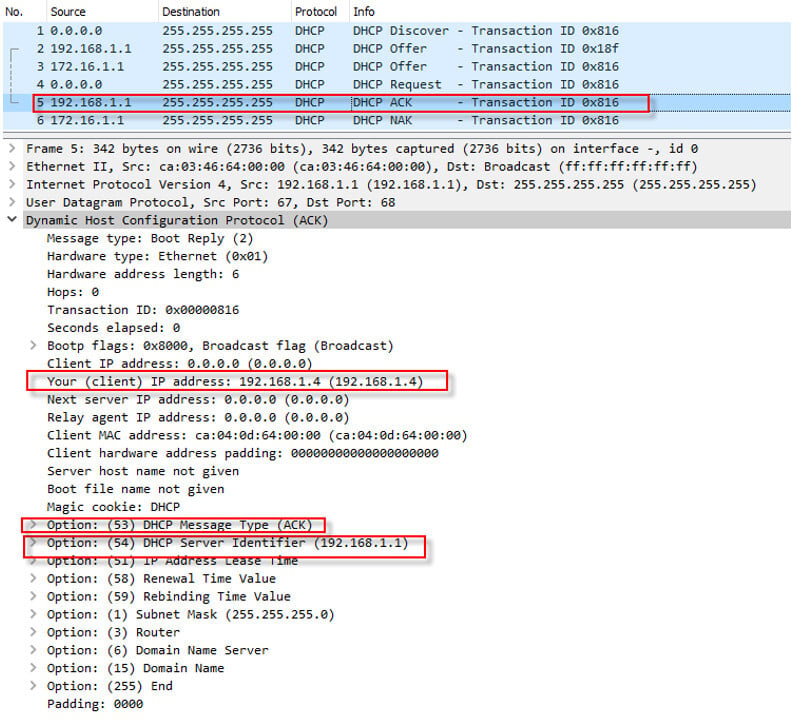 Step-5: Since the client DHCPREQUEST packet also reached the authentic DHCP server, it checks its configuration and see no relevant   IP pool, then it responses back with a DHCPNAK packet. MAC address is the only piece of the information we need to locate the rogue DHCP server and we found it in Step-2. 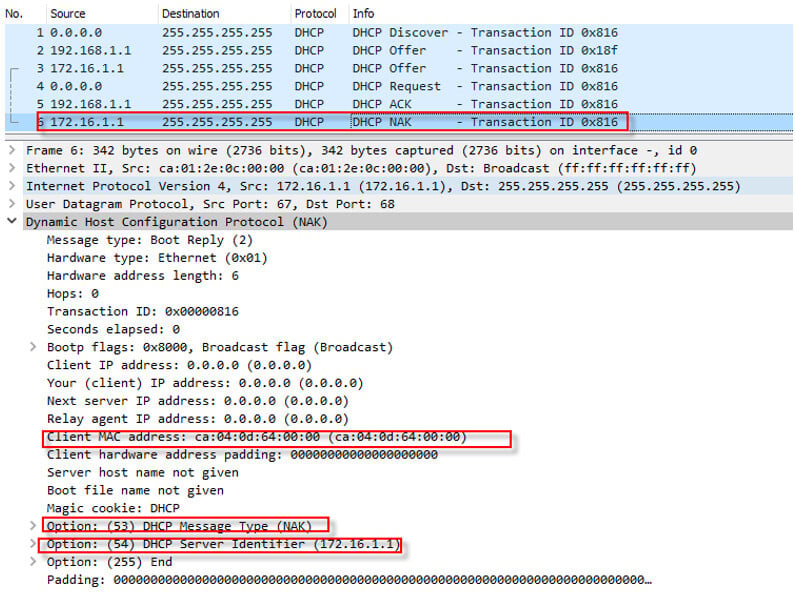 Step-5: Once obtaining the MAC address, we need to find the port that has that MAC address entry, so we will connect to our switch and apply the command below.

ALSO READ: How to restrict or allow ssh only from certain users, groups or hosts in Linux