Transmission Control Protocol (TCP) is a connection oriented protocol. Before exchanging data between both sides, a connection is established.  TCP Receive Window is a buffer on each side of the TCP connection that temporarily holds incoming data. The size of the window (buffer) is set during TCP 3-way handshaking and can be change later. The sending side can send only that amount of data before it must wait for an acknowledgment from the receiving side.

Assuming we have a TCP client and server application such as below. The client sends a request for a chunk of data and the server responses back. The figure below summarizes TCP receive window.

Step-1: The client sets a buffer for incoming data and advertises the size of the buffer (receive window) to the server.

Step-2: The server sends a chunk of data to the client for processing.

Step-3: The application on the client side processes the packets in the buffer and frees the buffer.

For sake of better understanding, we will capture some traffic between an SSH client and server. The topology will be like below. Both sides will be in the same subnet. I will use two Cisco routers to simulate the client and the server.

Step-1: After configuring both side for SSH successfully, start packet capturing between the client and the server.

Step-2: Initiate an SSH connection from the client to the server with “ssh -l celal 192.168.1.2” command and then enter the user’s password.

Step-3: Now, we have the TCP traffic. If you do not have the traffic file, you can download my pcap file from receive_window. As it is seen below, the packets belong to the SSH connection. 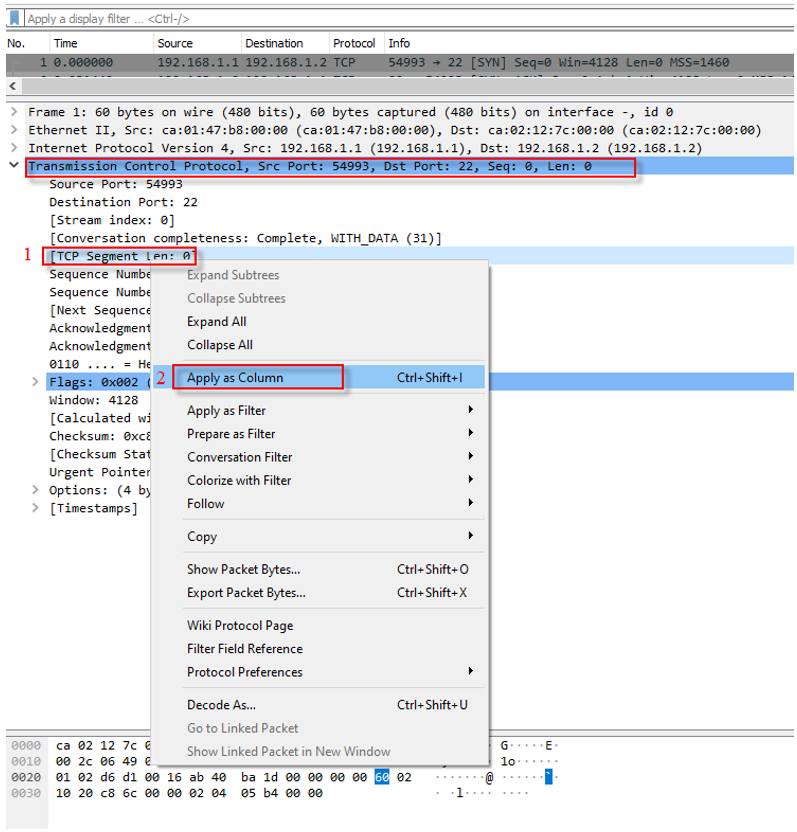 Select “Window:” filed and right click. Do the same steps for this column as well. 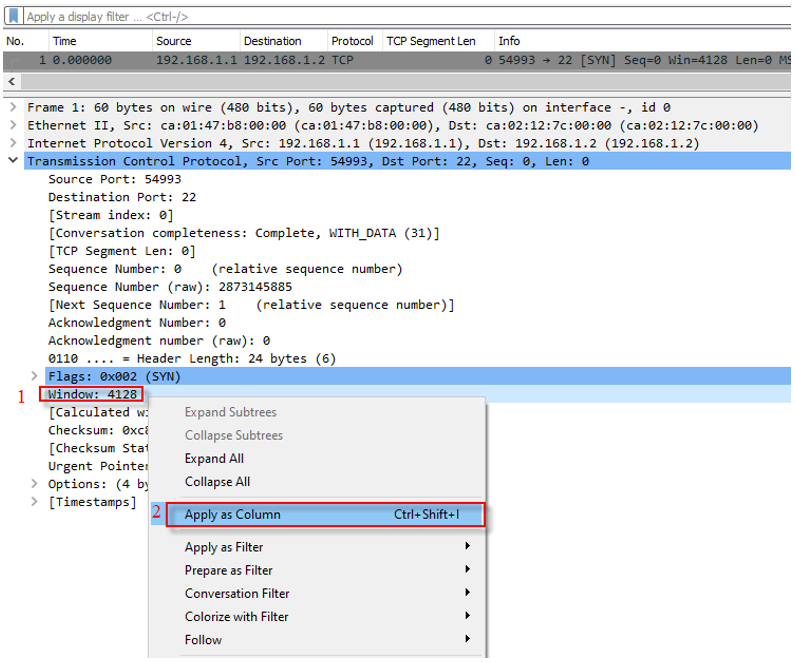 After adding both of the column, you should have the result like below. 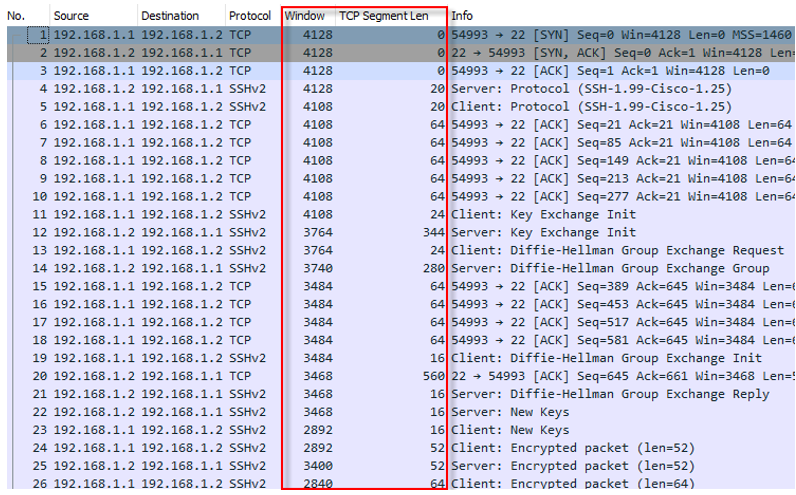 Step-5: Select the first packet (TCP SYN) and expand the TCP header like below. 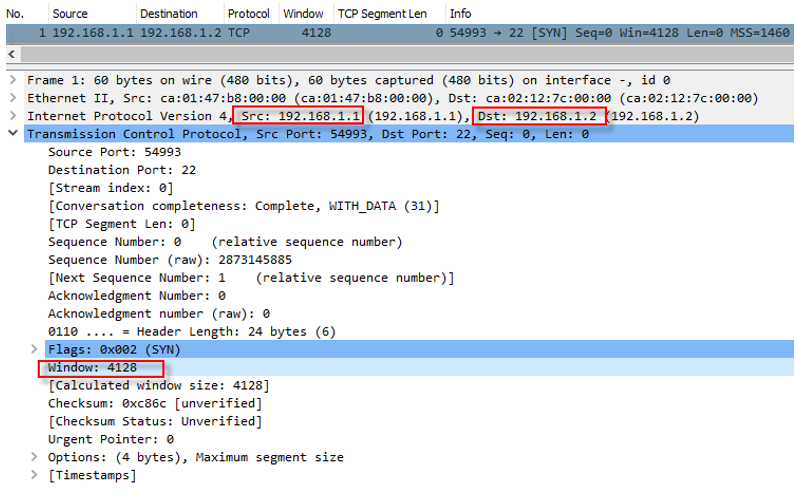 Step-6: Select the second packet, which is sent by the server to the client and expand the TCP header like below. 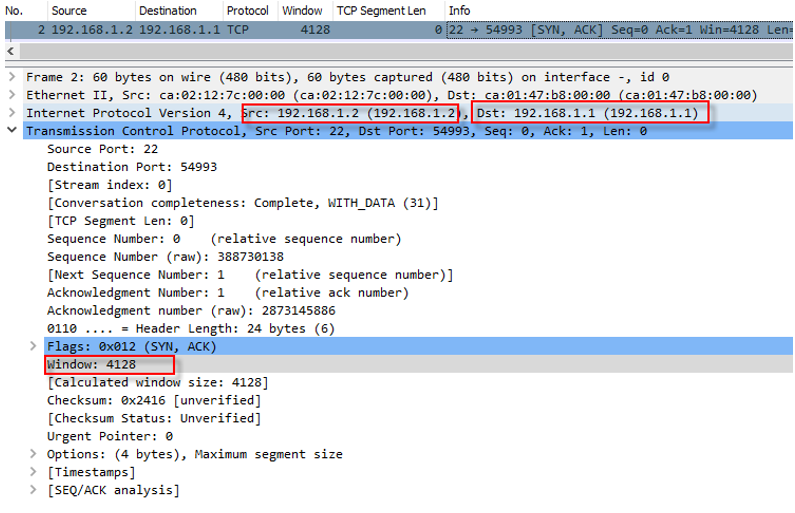 The server advertises the same size for the window. The client acknowledges the server with the packet number 3, which does not carry any data. 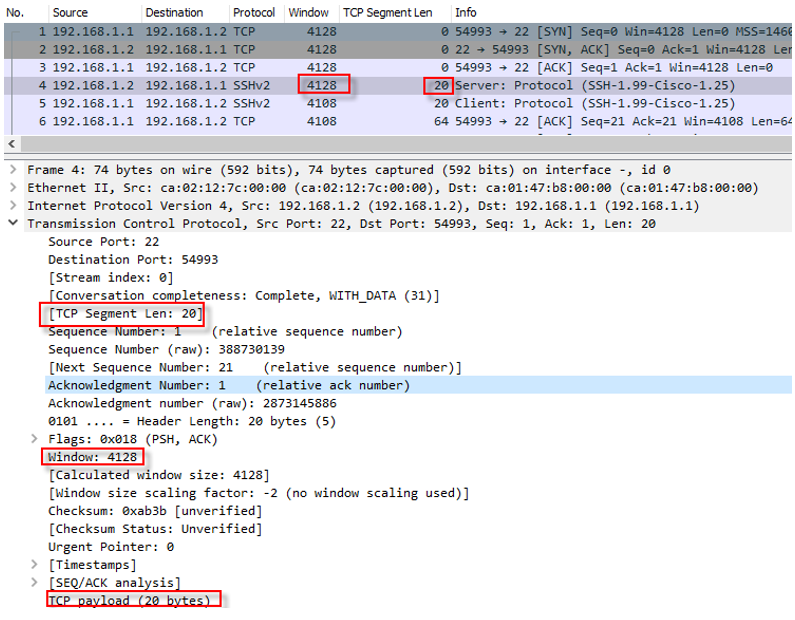 The packet is sent by the server, specifying the server can buffer 4128 bytes in it’s receive window. 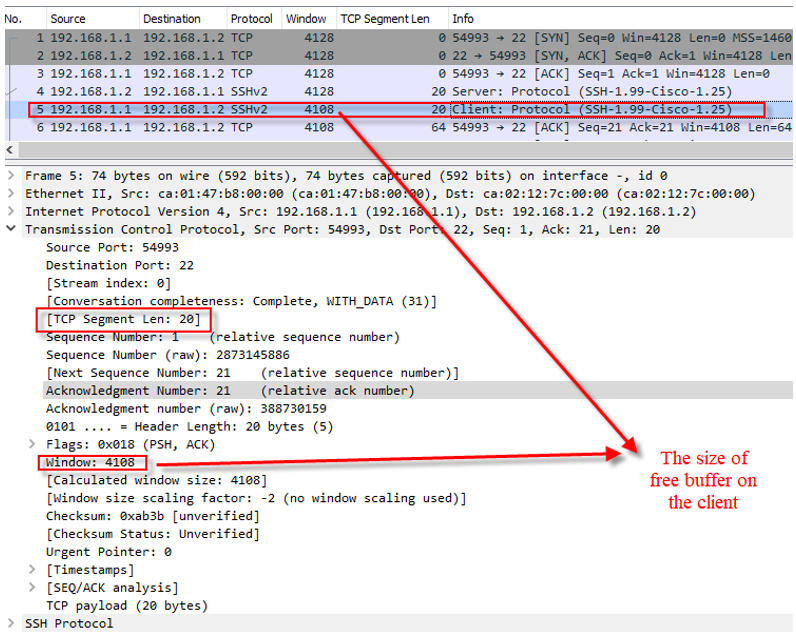 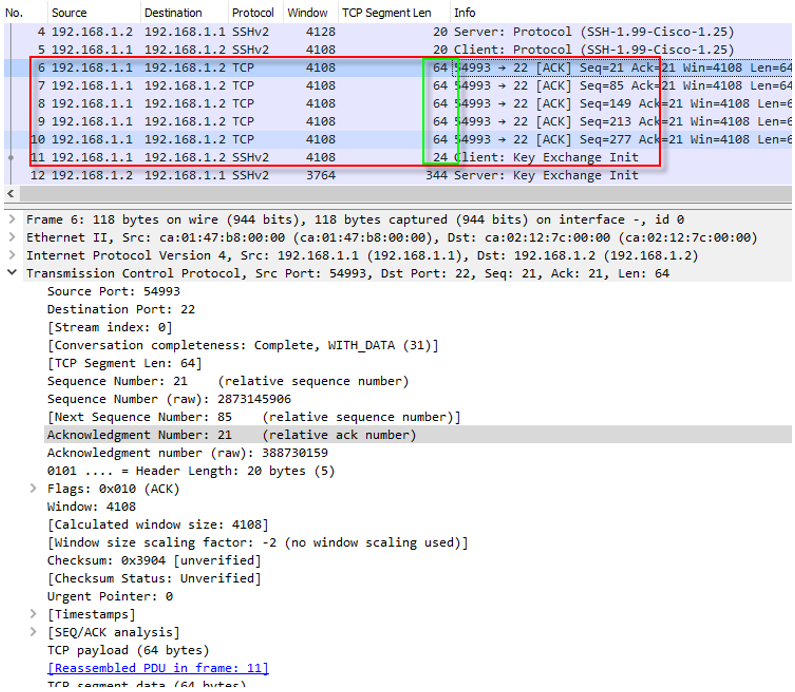 Step-10: After receiving 344 bytes, the server responses back with packet number 12, which contains 344 bytes. When the server receives 344 bytes, it stores that data in the buffer with reducing empty buffer size to 4108-344=3764 bytes. Following figure shows the details. 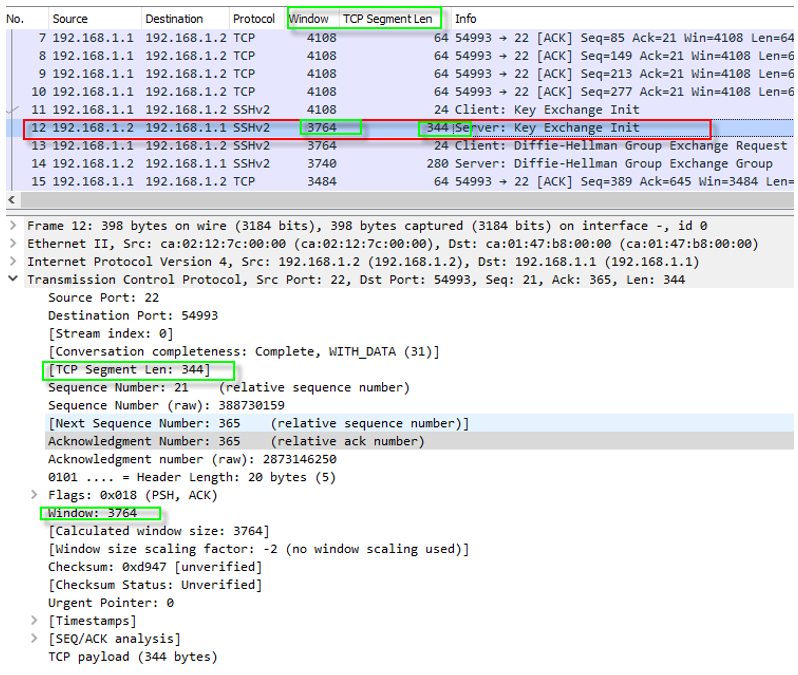 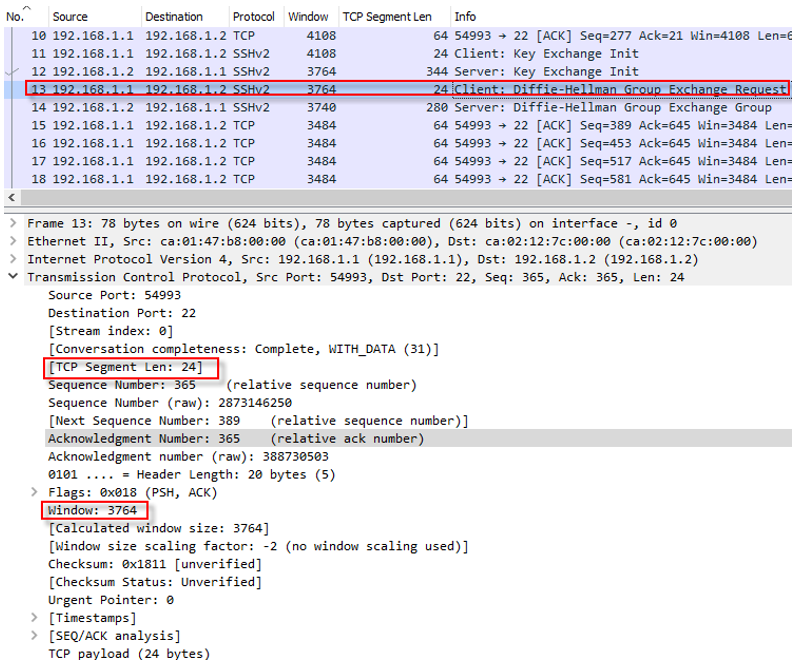 When the TCP was designed, only 2 bytes reserved for window size, which can be maximum value of 65,535 bytes. Since this can limit some networks throughput, window scaling measure was introduced in RFC 1323.  With this mechanism, the receiver is able to advertise a larger window as more resources are allocated for this connection. Basically, window scaling extends the 16-bit window field to 32 bits in length.

A TCP option is used to define window scaling. Both sides (client and server) negotiate window scaling during the establishment of the connection with the first two packets. Following screenshot shows that the client desires to use “window scale of 7”, which means that window size will be multiplied by 2^7=128. 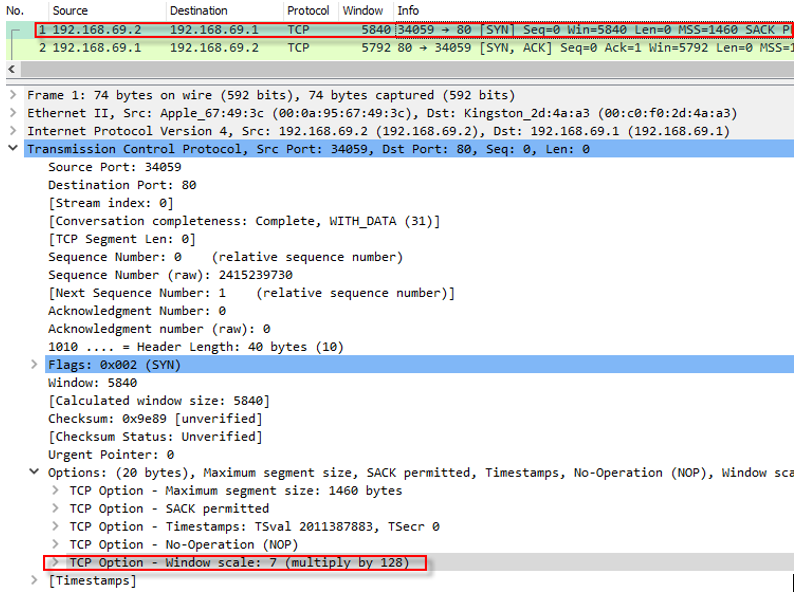 The TCP receive window size is the amount of receive data (in bytes) that can be buffered during a connection. The sending host can send only that amount of data before it must wait for an acknowledgment and window update from the receiving host.

TCP window is used for flow control, which ensures that sender won't overflow receiver's buffer by transmitting too much, too fast.