We will also implement linear regression in Python and will explain each part of the code in more detail. In a nutshell, this tutorial will contain all the necessary details about linear regression using Python from mathematical calculations to Python implementation.

As we have already discussed that the linear regression is used to estimate the relationship between independent and dependent variables using a straight line. In the upcoming sections, we will see how this straight line is built by looking at the mathematical part and python implementation as well.

We will use the pip3 command to install different types of modules that we will use in this tutorial. Python 3.4+ in most operating systems includes pip3 by default. If your python version is less than 3.4, then you should upgrade your Python version which will automatically install pip3. You can upgrade pip by using the following command:

In this tutorial, we will be also dealing with the data set in .csv file named Data_for_LR.csv. This file contains the following data: You can just copy and paste this data into your own CSV file.

Notice that there are two columns, one as input and another output. This is perfect data set for simple linear regression. In the upcoming sections, we will use this data set to train and predict the output using a linear regression algorithm.

The mathematical part of the Linear regression algorithm

Simple Linear Regression is a statistical method that allows us to summarize and study the relationship between two continuous (quantitative) variables. In other words, given an input x, we would like to compute an output y. The simple equation which is used to train the model in a simple linear equation is given below:

Where Y is the output, X is the input, m is the slope of the line and C is a constant value. The algorithm calculates, the values of m and C using the training data set and then calculates the output in the testing part. 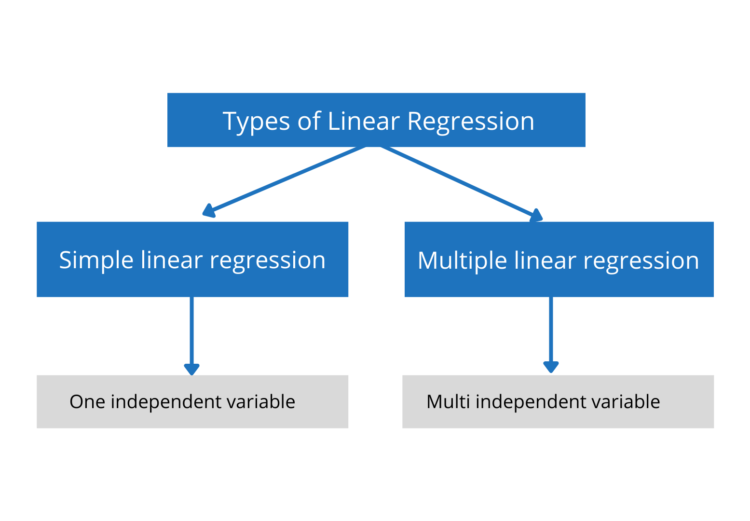 Python code for Linear regression with a full explanation

In this section, we will discuss the Python program for linear regression using simple data set. We will first train our model by splitting the data into training data set and then will test the model by providing testing data set. But before jumping into the Python program, let us first install all the required modules for this training.

Set up the environment for linear regression testing using Python

Let us now set the environment for our python program. First of all, we need to install the following python modules using the pip or pip3 command.

We are using the following versions of these modules in this tutorial.

You can use the following python code to check the versions of the module installed on your system. See the python code below:

Now let us jump into the explanation part and see how we can implement the linear regression in Python. First, we have to import the following modules.

Here we have imported our data from the csv file using pandas and stored it in a variable named dataset. Then we divide our data set into input(independent) values as X and output(dependent) values as y. Now let us split our data set into the training and testing parts. For that, we have to import the data splitting function from sklearn library. See the following python program.

Then we have defined random_state to 0 which means that the splitting of the data set into training and test part will be random. You can print these testing and training data sets to see the splitting more accurately.

Notice that here we are importing the Linear regression from sklearn module and we are training our model. While training our model, we are only providing the X_train and Y_train data sets ( which are 70% of the original data set as we had split in the above). Once our model is trained, then we can provide inputs to predict the output:

So here we are providing the input values without outputs. The outputs will be predicted by our model and will store them in y_pred variable.  We can also provide individual values to predict the output. For example, in our original data set for the input value 1, we have an output of 76.

Let us provide the same input to our trained model and see what will be the predicted output. See the example below:

Notice that the output is not exactly the same but it is near to the actual value. Once we have the output, we can use different performance evaluations to see how accurate our algorithm is in predicting the output values.

Now let us go to the visualization part and see visually the predicted and actual values. See the python program for visualization below: 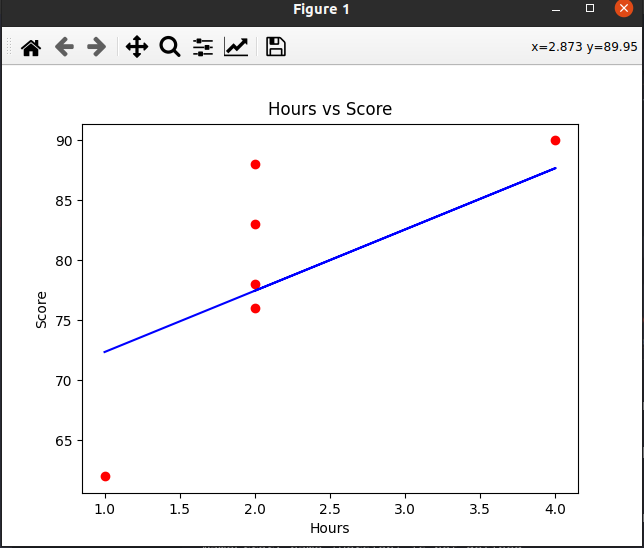 Notice that our model prediction is not accurate, it is because we have very little data in our training part. Usually, it needs thousands of data to train the model but for the sake of learning purposes, we took a small data set.

The following is the full code for the linear regression using python. See the following example. 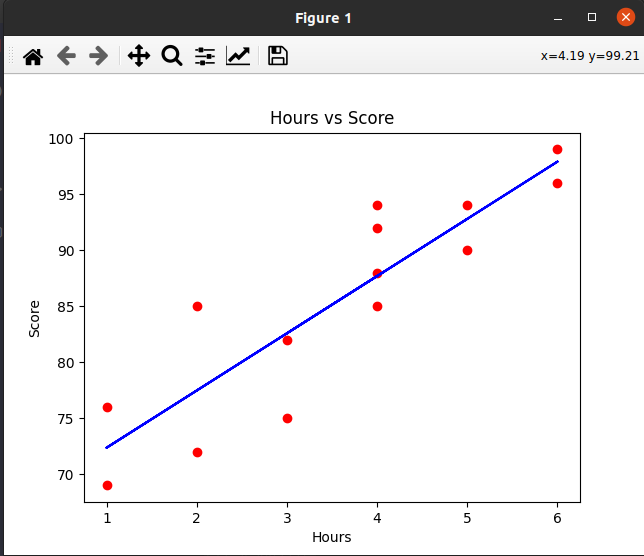 This graph shows the training data sets in red and our train model in the blue line. 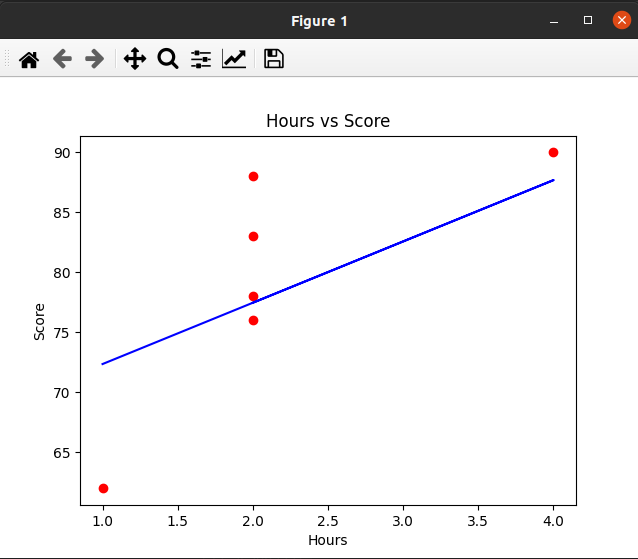 This graph shows the inputs values and the predicted output from our trained model.

Performance evaluation is also known as Evaluation metrics, is a measure of how well a model performs and how well it approximates the relationship. These methods help us to know the accuracy and precision of our model in making predictions. There can be multiple methods to evaluate the performance of linear regression. Some of which we will discuss here:

Mean Squared Error (MSE): The most common metric for regression tasks is MSE. It is the average of the squared difference between the predicted and actual value. The following is the simple formula:

Mean Absolute Error (MAE): This is simply the average of the absolute difference between the target value and the value predicted by the model. Not preferred in cases where outliers are prominent. The following is the simple formula for MAE:

Root Mean Squared Error (RMSE): This is the square root of the average of the squared difference of the predicted and actual value. The following is the simple formula of RMSE.

To summarize, this tutorial contains all the necessary details of the linear algorithm implementation using python.