You can do that by running the command:

What if you want to do more than clear the commit history? That is where git checkout, git revert, and git restore come in. Read on to find more simple commands to handle git undo commit before push and related challenges.

Different methods to undo commit before push in git

git reset is a way to undo mistakes in the repo. You can use it to undo commits in the local repo before pushing the changes to a remote repo.

git revert command is a safe way to undo operations. Unlike git reset --hard, It does not delete commits from the history but creates a new commit by inversing the specified changes.

git restore helps to remove uncommitted local changes. It discards the file from the staging area without touching its actual modification.

Before walking you through the ways to undo commit before push, you should access a terminal.

We will then build a remote repo from scratch. I am creating a Github repo called git-undo.

Let's grab the URL to the remote repo. 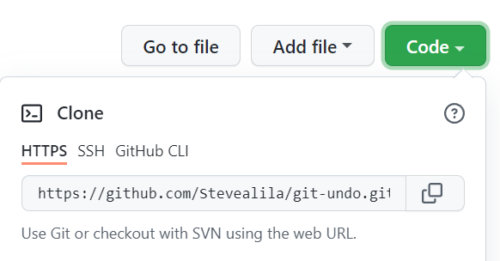 Head over to the command line and clone the repo by running the commands:

cd into the folder and create a text file called file1.txt.

Run git status on the command line. We have an untracked file.

Let's add the changes to the staging area using

Next, we should commit the staged file. We can achieve that by running:

Running git status reveals, "Your branch is ahead of 'origin/main' by 1 commit. and the working tree is clean."

We can synchronize the two repos by running

We can see the commit history by running either of these commands:

Our history has two commits. Now is the time to test git undo before push using the four typical ways.

Let us add some words into file1.txt.

git status shows we have an untracked file.

Let us git add . and git commit -m "put something in file1".

Let us recheck the commit hashes.

Assume we want to undo the commits before pushing the changes to the remote repo. We can achieve that in two ways:

git checkout <commit hash> matches the working repo's state to the commit we have done git checkout on.

We can also git checkout a branch to enable git undo commit before push.

Let us format the history's appearance to have a better look at the commit head.

git reset --hard <commit hash> takes all changes to the state they were in at the specified commit hash, leaving untracked files untouched.

We can undo the last commit to our test project as follows:

If we redo git log --graph --decorate, we realize that one commit got discarded. The head is now in the commit hash we specified when undoing the changes.

Running git status shows that untracked files were not removed. To get rid of the untracked directories and files, run

git reset --hard <commit hash> is one of the most dangerous ways to perform git undo commit before push because you may not recover the commit history after performing the command.

You are probably wondering, "What if I want to recover commits after discarding them using git reset --hard?" It is simple.

If not much time has gone after running git reset --hard command, you can follow these steps to recover the commits:

Run git reflog to see if the git garbage has not collected changes. My log appears as follows:

git checkout the commit hash whose deletions you want to recover.

Make a branch for the changes in the detached head.

And voila, you have your commits back!

We can now run git revert c2eb392 undo commit before push. It prompts us to enter a commit message by opening a code editor. After closing the editor, let us run git diff c2eb392 to inspect the changes made. 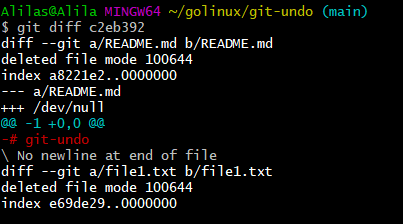 Let us repeat the process for the hash 4438e09. If we git log --oneline, we see the number of commits has changed. This time around, we have new commit hashes, as indicated in the screenshot below:

git restore can help you undo changes to a commit at the file level. Here is how to use it.

Other crucial commands to ease the process are git checkout, git revert, and git restore. It is your turn to apply what you have learned in this article.