Git blame is a command to inspect who made a change and when they made it. You can view the details on the terminal or a graphical user interface.

To see the changes on the CLI, run the command on a file.

You can also specify the tag.

Reduce the number of viewable lines using the -L flag by specifying the target start or end positions.

Lastly, you can view who made what change, when, and the modified remote using a GUI application. For instance, this tutorial uses Visual Studio Code with extensions: Git Blame and GitLens.

Now that you have a brief knowledge of what it takes to use git blame, let us set up a laboratory and practice using it.

I am copying the URL of a GitHub repository, cppApp. 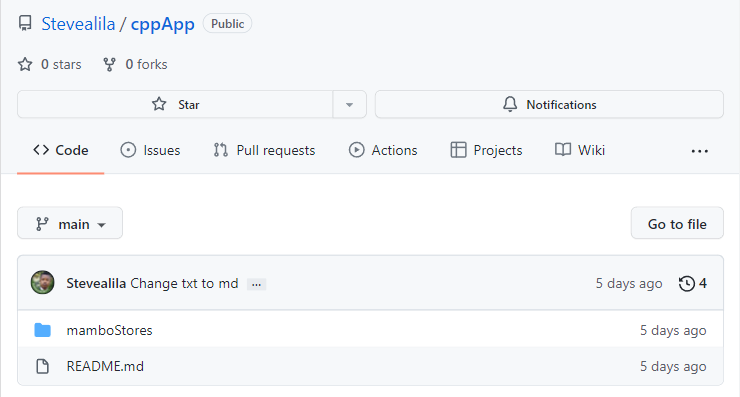 Clone it on the CLI and cd into it.

Let us do practice using the cloned repository.

To view who made a change on a line and when they made it, use the blame command as follows:

First, check all files in the target folder.

To confirm the commit id, whose author we want to blame, run the log command with the --oneline option.

Lastly, we can see that he modified the line: 1) #include <iostream>.

From the above results, we see the author's username. What if he copied and pasted the line? Maybe we are only interested in his email address instead of the username. Here is how to check the details.

To check the lines copied or moved from another file and the file's original author, use the -C option.

To check the lines copied or moved within the same file, including the file's original author, use the -M option.

To check the author's email address, instead of the username, use the -e option

Create a git tag before seeing how to use them in the blame.

Then relog the history. We see our newly created tag as follows.

After creating the tag, we can git blame the modified line using the tag.

Say we are only interested in the modification details of the first five lines of the answer.cpp file. We can view the details using the -L option, as follows.

Tell git the number of lines it should count from the first line.

Assume we want to check the changes made on the lines of the answer.cpp over the past one week. We can do that using the --since option.

That is all master before getting started git blame on the CLI. What if you want to see the changes on a GUI? That is where a code editor with its rich extensions comes in.

Let us see how to manage git blame on Visual Code Studio.

How to use git blame in Visual Studio Code

In this section, I am using a forked Vue.js repository.

Clone the repository and cd into it.

Then open it with Visual Code Studio. And install the two extensions. 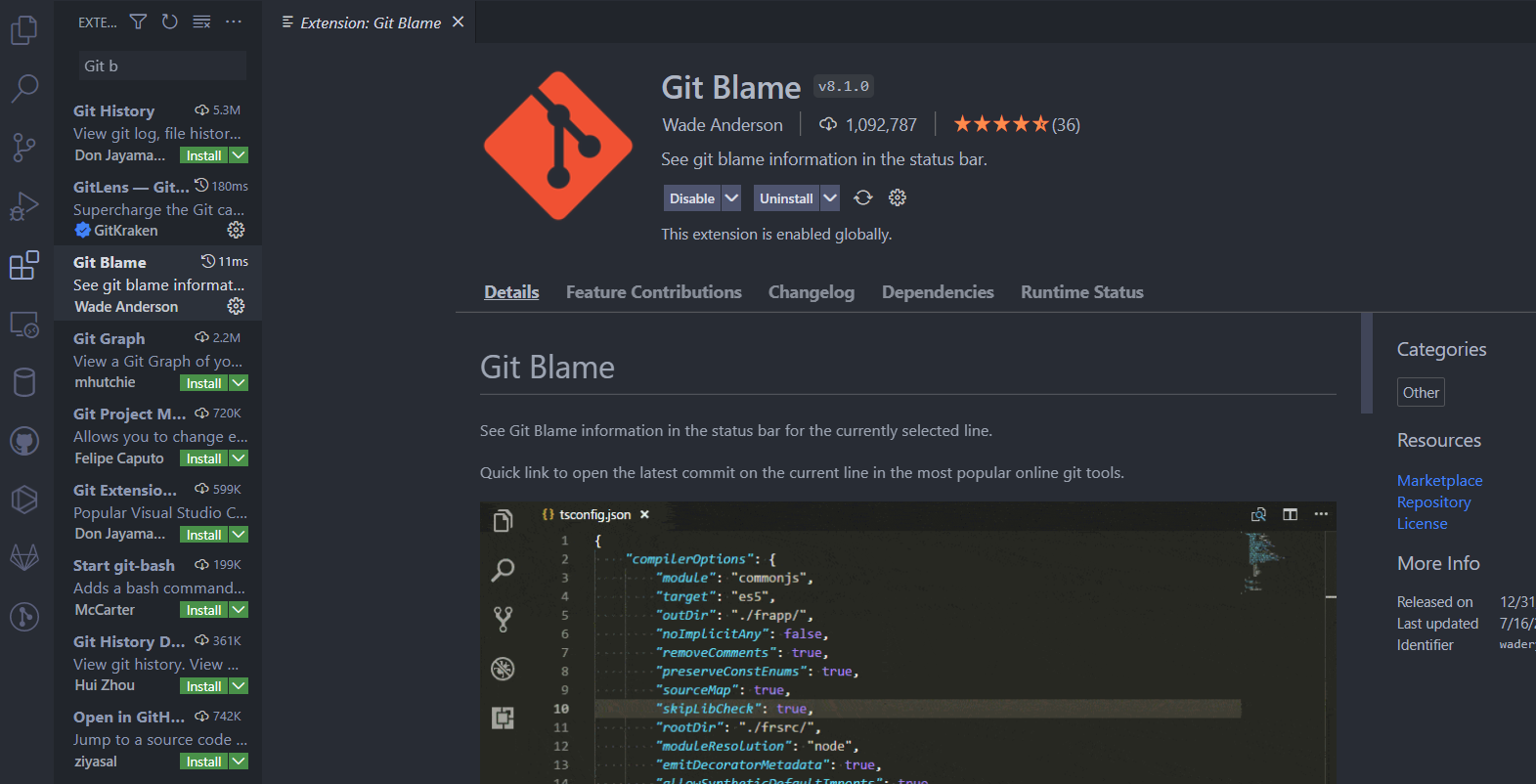 We are going to see who made changes to the index.js file. Navigate it using following the its path: Packages -> vue3-jest -> lib -> index.js.

On the top of the file, you see the last (as per our inspection date) person to modify the file, when they made the changes and the number of collaborators. 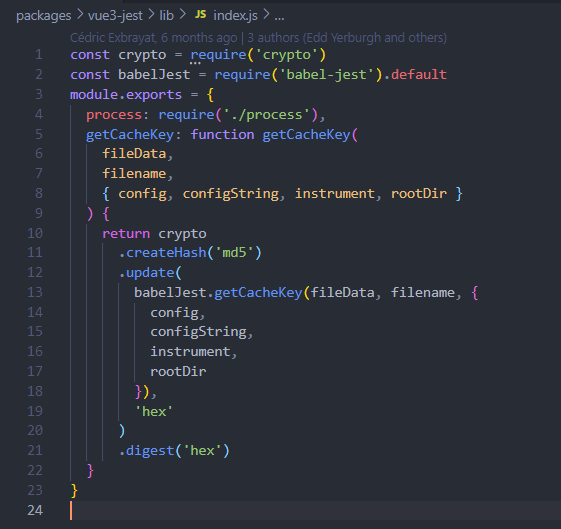 Additionally, we can view the profile photo and more author details by moving the cursor onto their name.

Looking at the bottommost part of Visual Studio, Git Blame tells us who to blame for the particular line's changes and when they made the change. Clicking on the information, a prompt with the commit details opens up, asking us to view the details on the remote. 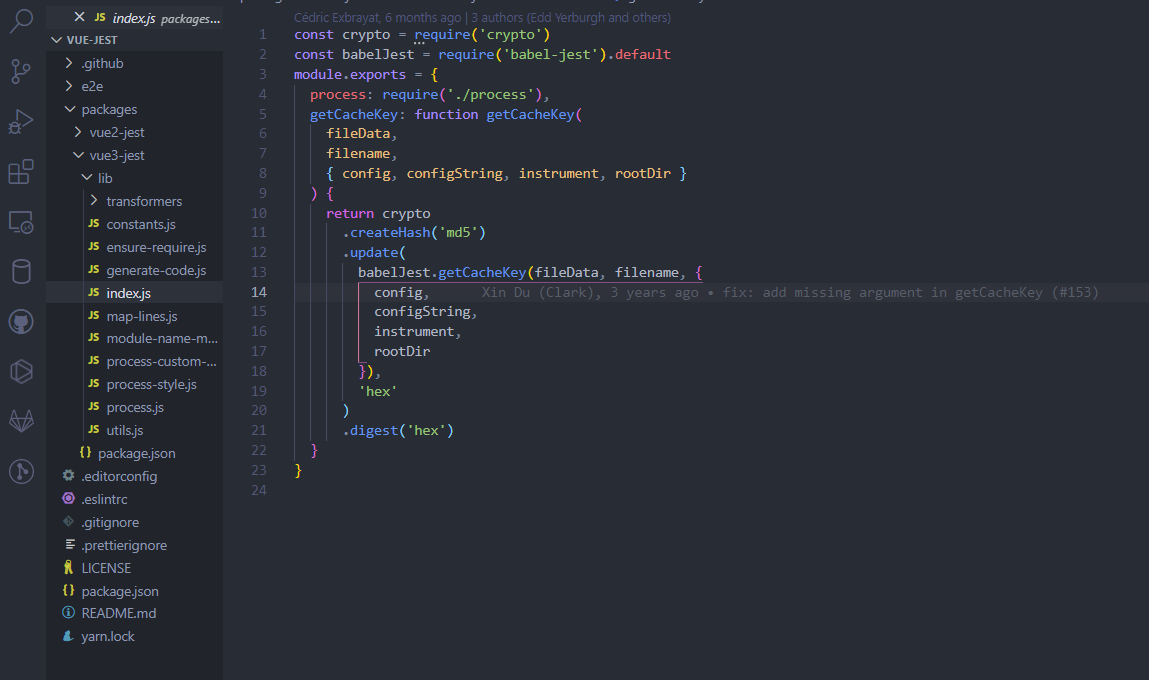 And you land on the diff file on GitHub. 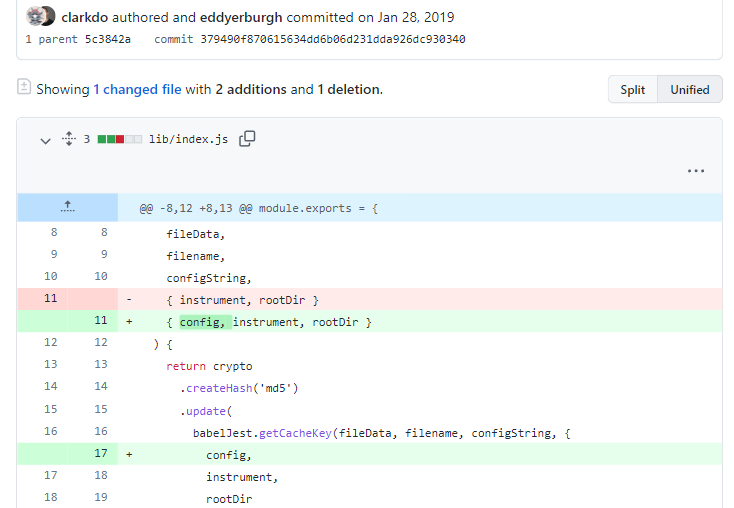 You just learned the role of git blame: inspecting who made what change and when they did it. Apart from tracking the modifications on the CLI, you can now see the changes on Visual Studio Code's GUI using GitLens or Git Blame extensions.

Now is the time to simplify repository management by taking an in-depth look at the file line modifications, as you saw in this tutorial.