Now that you are familiar with writing ansible playbooks, in this section we will use Visual Studio Code Editor to write playbooks instead of CLI. You will need GUI based Linux environment for this part of tutorial. If your CentOS or Red Hat is not installed with GUI Desktop then you can install GNOM Desktop or Workstation using DNF or YUM.

Next execute this script which will create your /etc/yum.repos.d/vscode.repo repository file

Now you can go ahead and install Visual Studio Code using dnf or yum.

To open the Visual Studio Code Editor, login to the graphical console of your controller node as ansible user and execute "code ." on the terminal at the home folder or you can using any of the Projects directory 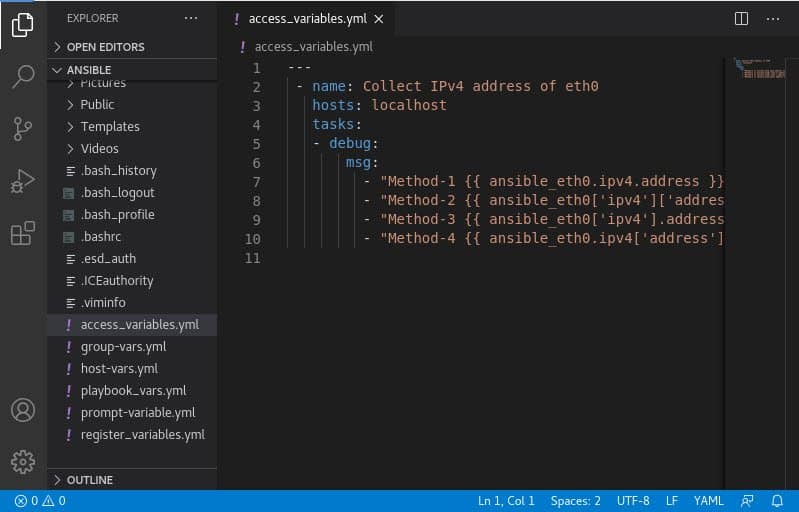 The Visual Studio Editor will come up and you can see all the YAML files which we have created are also visible in the LEFT TAB.

Since we have to work with Ansible we must install the Ansible Extension/Plugin. To install this click on "Extensions" from the Left Menu and search for "Ansible" string. Click on "install" to install the respective extension. 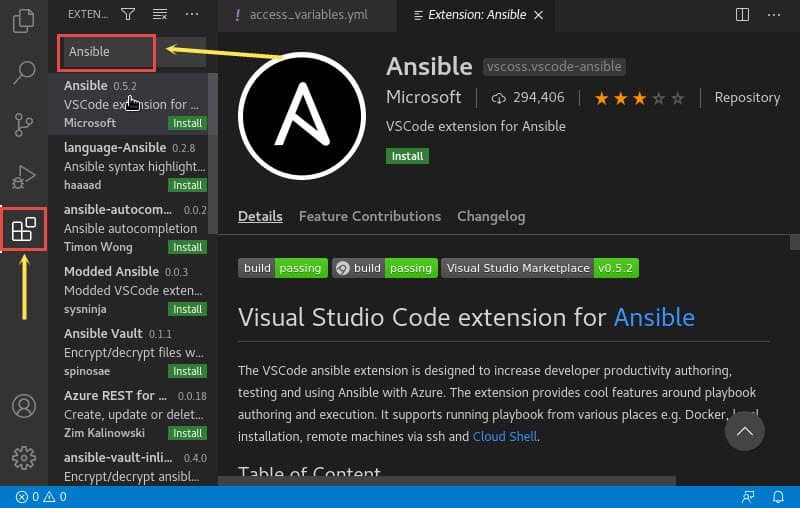 Configure Visual Studio to use Ansible

On the same session scroll the page and look out for "Usage" section which will show following information: 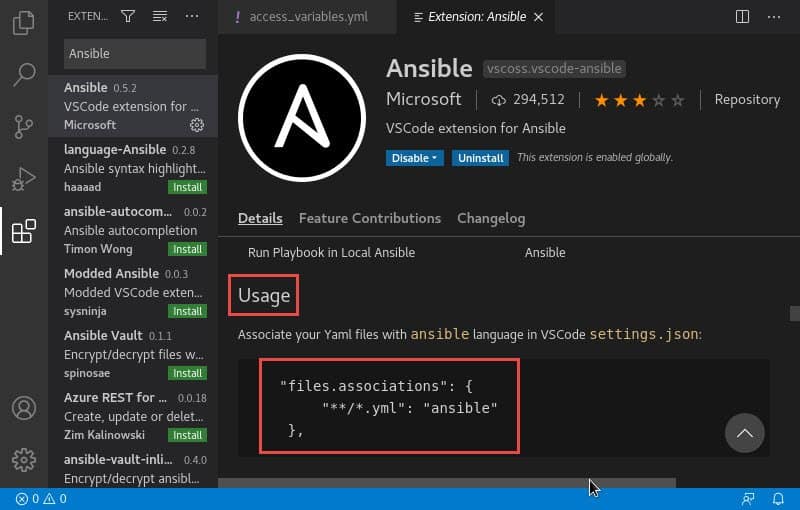 So you have to copy this setting as we have to use this to associate our Visual Studio with this JSON configuration. After you have copied the content, click on File → Preferences → Settings 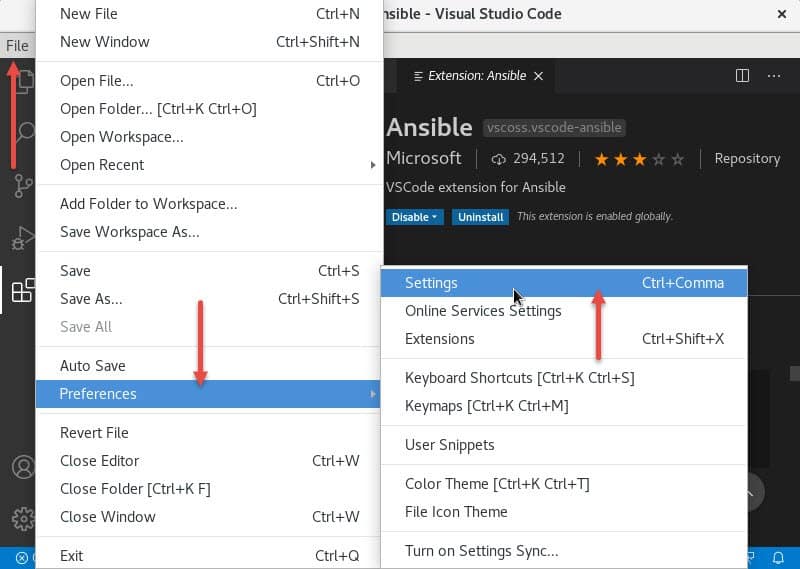 Search for "associations" in the search bar which will bring you "settings.json". Click on "Edit in settings.json" and paste the content which we had copied and press Ctrl+s to save the file and close the file. 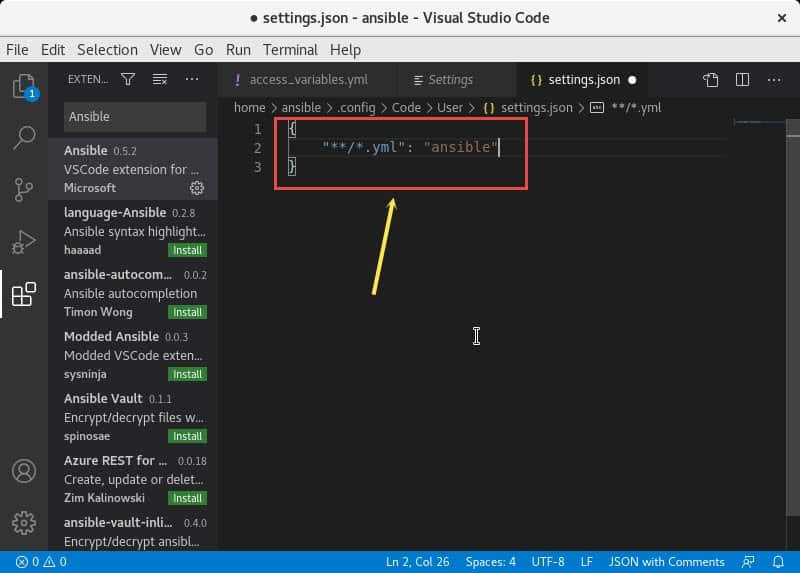 Now we can create a new file and start by creating a new playbook using the visual editor. Click on File → New File which will create a new file. Press Ctrl+s to save it with a different name, I will save it as "playbook_vsc.yml"

Now I have created a very simple playbook using the Visual Code Editor. Press Ctrl+s to save the playbook before executing.

To execute the playbook using Visual Studio press Ctrl + Shift + P which will present you a bunch of options for execution. Since we are executing the script on localhost i.e. the controller node, I will use "Run Ansible Playbook in Local Ansible"

Output from the execution. So our playbook has successfully executed. 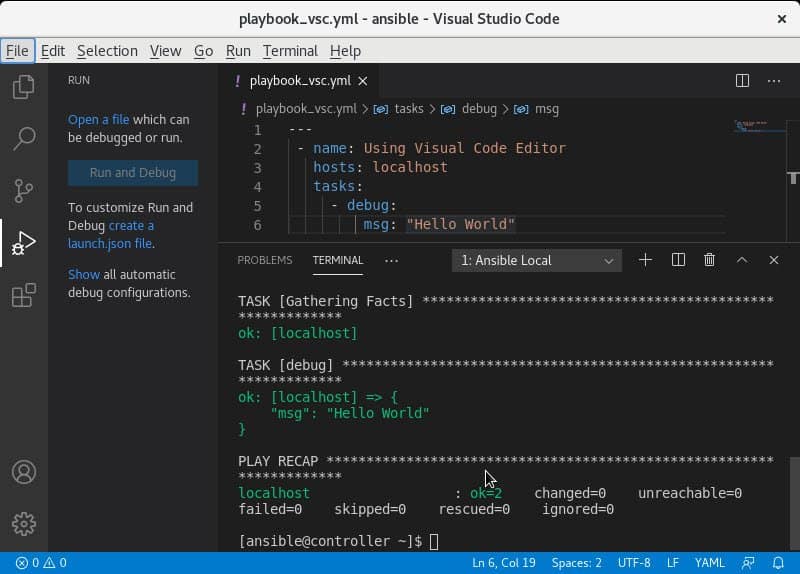 Next in our Ansible Tutorial we will start using different types of operators such as arithmetic, comparison, test operator, ... in Ansible.