In this section, we will build a foundational understanding of the Kubernetes API server and the various ways of interacting with it. We will learn how kubectl and other HTTP clients communicate with the Kubernetes API server. We will use some practical demonstrations to trace these communications and see the details of HTTP requests. Then, we will also see how we can look up the API details so that you can write your own API request from scratch.

In Kubernetes, all communications and operations between the control plane components and external clients, such as kubectl, are translated into RESTful API calls that are handled by the API server. Effectively, the API server is a RESTful web application that processes RESTful API calls over HTTP to store and update API objects in the etcd datastore.

Kubernetes is made up of a bunch of nodes (machines in the cluster) with different roles as shown in the following figure: 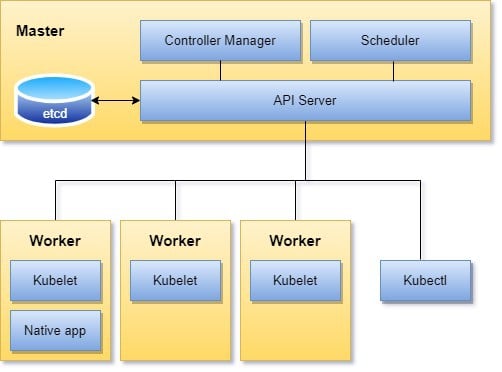 The control plane on the master/controller node(s) consists of the API server, controller manager, and scheduler. The API server is the central management entity and the only component that talks directly with the distributed storage component etcd.

The API server has the following core responsibilities:

To check your API server on the controller, execute kubectl get pods -n kube-system where kube-system is our namespace:

So you can see, currently we have a single instance of the API server i.e. kube-apiserver-controller.example.com. The API server is stateless (that is, its behavior will be consistent regardless of the state of the cluster) and is designed to scale horizontally. Usually, for the high availability of clusters, it is recommended to have at least three instances to handle the load and fault tolerance better.

The kubectl command is translated into an HTTP API request in JSON format and is sent to the API server. Then, the API server returns a response to the client, along with any requested information.

The following diagram shows the API request life cycle and what happens inside the API server when it receives a request:

After authentication is successful, the attributes from the HTTP request are sent to the authorization plugin to determine whether the user is permitted to perform the requested action. To demonstrate this I will create a new Read Only Service Account. You can ignore the steps and commands for now as I will explain these in later tutorials.

We are defining a ClusterRole with the ability to list all the Pods in any namespace, but nothing else.

Run the following command to create this RBAC policy, as well as our ServiceAccount:

Now I am will use my root user which has Cluster Admin privilege to list the pods:

Next let's describe any one of the pods (output is trimmed):

Both the commands are successful as we were executing the command as admin.

Now, we will run the same commands we used previously, but this time pretending to be the user using the ServiceAccount that is currently bound to the ClusterRole and ClusterRoleBinding that we created.

So this command was successfully executed, now let's try to describe a pod:

The kubectl describe command uses the get verb which is not allowed from the read-only service account user. Hence the user will get a Forbidden error. This Forbidden error is returned by the authorization plugin.

kubectl provides a tool that you can call by using kubectl auth can-i to check whether an action is allowed for the current user.

The HTTP Interface of the API Server

You can get a full list of API resources by using the following command:

You should see a response similar to this:

The different API versions differ in terms of stability and support:

You can get a complete list of the API versions enabled in your cluster by using the following command:

An interesting thing that you may observe in this screenshot is that some API resources, such as autoscaling, have multiple versions; for example, for autoscaling, there is v1beta1, v1beta2, and v1.

To get more information about individual API resource:

There are two possible ways to directly access the API server via the REST API—by using kubectl in proxy mode or by providing the location and authentication credentials directly to the HTTP client. A concrete path, for example, in the default namespace would be /apis/batch/v1/namespaces/default/jobs.

In this section we’ll be using kubectl and curl to demonstrate the use of the Kubernetes API. To get all the API resources yoi can use following command:

At the top of this list is v1 and under that is namespaces, so to request the namespaces:

One of the namespaces is called default, so request details on the default namespace:

There is a common Linux tool called jq available as part of jq rpm. jq is like sed for JSON data. Using jq can make the JSON output from kubectl much easier to read with syntax highlighting:

Alternatively you can also use Python3 tool to get the JSON output:

kubectl has a great feature called kubectl proxy, which is the recommended approach for interacting with the API server. This is recommended because it is easier to use and provides a more secure way of doing so because it verifies the identity of the API server by using a self-signed certificate, which prevents man-in-the-middle (MITM) attacks.

Let’s start by executing the following command in a terminal to start a proxy to the API server:

The default port used is 8001, but in our example we have defined a custom port number 8080 while adding an & (ampersand) sign at the end of our command to allow the proxy to run in the terminal background so that we can continue working in the same terminal window.

We can now start exploring the API using curl, this command proxies the Kubernetes API to our local machine and also takes care of the authentication and authorization bits. It allows us to directly issue requests via HTTP and receive JSON payloads in return.

Now similar to kubectl, we will access the default namespace using curl, this will return a large output with the JSON data that is stored on this path.

In this Kubernetes tutorial we learned about API server, the way that Kubernetes uses the RESTful API, and how API resources are defined. We learned that API calls go through multiple stages, including authentication, authorization, and admission control. We also applied what we learned by making an API call directly to the API server, using the curl HTTP client to interact with objects by using different authentication methods, such as ServiceAccount.

By now you should know how the API server works internally, and how to interact with it using the CLI tool kubectl for resource exploration and manipulation.