Airmon-ng utility is a command-line tool used to enable monitor mode on wireless interfaces. It can also be used to switch back from Monitor mode to Managed Mode. However, this tool is not available as a standalone utility. It comes with the Aircrack-ng package. First, let's discuss these two terms: Monitor mode and Managed mode before diving much deeper into installing and working with Airmon-ng.

The Difference Between Monitor Mode and Managed Mode

ALSO READ: How to install NordVPN on Ubuntu? [SOLVED]

In Monitor mode, the wireless interface can listen and capture any packet within its range. When we say packets, we refer to any data sent by a device to the Access Point (e.g., router) or any data transmitted from the Access Point to the devices on the network. Monitor mode is necessary for any penetration tester who wants to carry our wireless attacks on a network. It enables one to capture many packets that can be used to crack WPA/WPA2 WIFI passwords, carry out MiTM attacks, and much more.

Currently, there are different security tools available for assessing WiFi network security, but the Aircrack-ng package has garnered quite some fame from users. The Aircrack-ng package is a suite of various tools used to manipulate, crack and assess WiFi networks for any vulnerabilities or security loopholes. It focuses on four primary areas of wireless networks security:

ALSO READ: How to PROPERLY install flask on Ubuntu [Step-by-Step]

The Aircrack-ng package includes up to 16 tools to carry out all these functions. Some of the most popular include, Airmon-ng, Airodump-ng, Aircrack-ng, Aireplay-ng, and many more.

By default, the Aircrack-ng package comes pre-installed on a full-featured Kali Linux installation. However, that might not be the case if you installed the minimal version or installed Kali Linux on Chromebook or Android. If that's the case for you, follow the steps below.

launch the Terminal and execute the commands below.

When done, run the command below to confirm the installation was a success. That displays the number of CPUs & SIMD support on your system.

From the image above, we can confirm that Airmon-ng was installed successfully on our system.

Alternatively, you can install the Aircrack-ng suite by compiling the source code on Github and compiling it yourself. Of course, this method is a little complicated and time-consuming than installing the Aircrack-ng suite with the APT package manager. However, if you are fascinated with running the different commands on the Terminal and eager to understand how the compilation process works, you should try this method. Follow the steps below.

First, launch the Terminal and run the commands below to install the required dependencies and libraries.

When downloaded, run the command below to download the source from GitHub.

When you run the ls command, you will see a new folder, "aircrack-ng." Use the cd command to navigate to this new folder.

Now, run the commands below (one by one in order) to compile the source code and install Aircarck-ng on your system.

HINT:
The make command might take quite some time to finish execution; please be patient. This method can also be used to install Aircrack-ng on other Linux distributions like Linux Mint, Ubuntu, Fedora and Rocky Linux.
Advertisement

After installing aircrack-ng, run the command below to install the OUI database. This downloads OUI lists from IEEE, enabling the Airodump-ng utility to add manufacturers names when generating NetXML files.

To get started, we first need to know the names of the wireless interfaces available on our system. Run the command below.

From the image above, you can see we have two wireless interfaces - wlan0 and wlan1. Let's set wlan0 to monitor mode by running the command below. 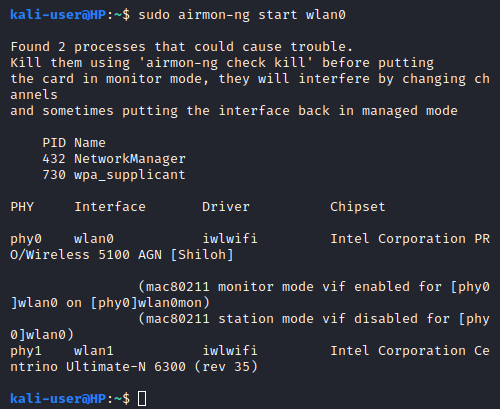 To confirm whether monitor mode was successfully enabled on our interface, run the command below.

From the image above, you can see the mode is set to monitor mode. Also, the name of our interface changed from wlan0 to wlan0mon. We can now use the card for packet sniffing and performing any other wireless network security tests. To stop monitor mode on this card, run the command below.

That's it! This post has given you a step-by-step guide on installing the Airmon-ng utility on your Kali Linux system. Additionally, you can use the second method to install the Aircarck-ng suite on any other Linux distribution. If you are just getting started with security, please check out our in-depth articles on security and ethical hacking. If you encounter any errors running any of the commands above, please let us know in the comments below.