In this article, we will look at how to install Kali Linux on android device (non-rooted). That opens a whole new world of possibilities that you can do with your smartphone. Instead of carrying your heavy laptop around, you can go with your phone and still perform penetration testing like you would with your Kali Desktop. Unfortunately, you might be limited to specific resources and capabilities. For example, performing a Reverse Engineering or Malware analysis with your phone won't be that smooth. However, tasks like social engineering can come in quite handy. With that in mind, let's dive in and get started. 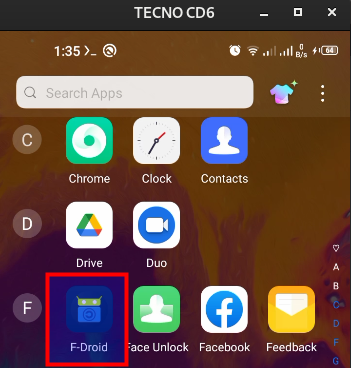 NOTE:
Even though Termux is readily available on Google Play Store, you are highly advised to download Termux from F-Droid or GitHub. The play store version for Termux no longer receives updates, and you will most likely run into errors when using the app. 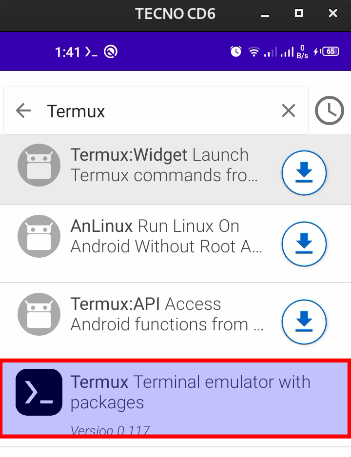 The Nethunter Kex application will enable you to access the Desktop Interface for Kali Linux on your Android. You can easily download and install the APK file from the Nethunter Store website.

Install Hacker's Keyboard by Klaus Weidner, as shown in the image below. 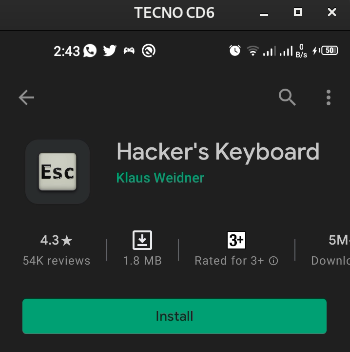 Unlike your standard Android keyboard, the Hacker's keyboard brings the keyboard's functionality on your laptop to your phone. It comes with Arrow keys, Tab keys, Ctrl keys, and Esc keys. It also supports multitouch as the keyboard is based on AOSP Gingerbread soft keyboard. Launch the Settings app on your phone and locate the "Manage Keyboard" option. Enable the Hacker's keyboard, as shown in the image below. 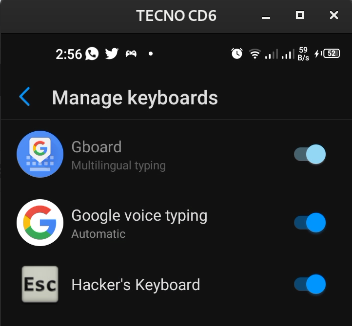 Launch Termux on your phone and update and upgrade the system using the command below.

NOTE:
Termux doesn't give you a Graphical interface. Instead, all you get is a command-line shell where you can execute commands. If you have worked with Linux systems before, this shouldn't be a big deal. If you are a newbie to Linux systems, don't worry. Just execute the commands on this article until we have a fully Kali Linux Desktop system running on our Android device. 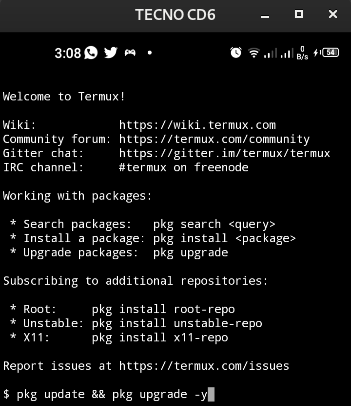 Up to this point, Termux has limited access to the filesystem. Therefore, any files created by Termux outside the current session won't be accessible. To solve that, run the command below: 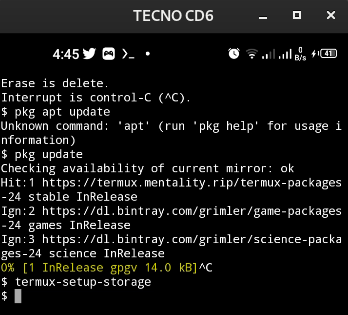 You will see a message like "Allow Termux access photos, media and files on your device." Click Allow. When done, execute the command below to install some packages needed to install Kali Linux on android. 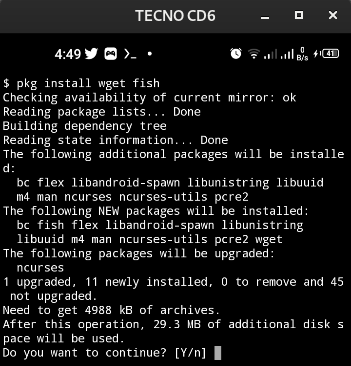 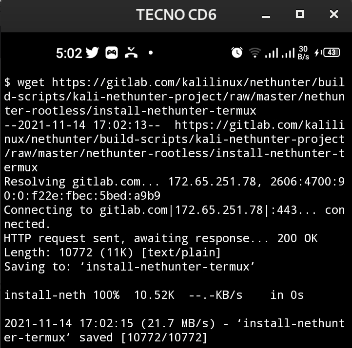 When you run the ls command, you will see a file called.'install-nethunter-termux'. To make this script executable, run the command below.

To run the script, execute the command below: 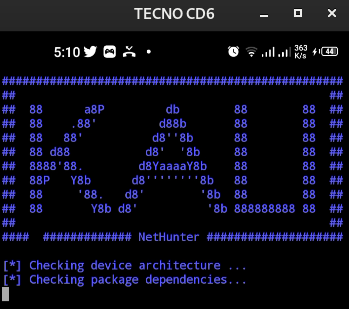 After successfully install Kali Linux on Android phone, you should see a screen similar to the image below. 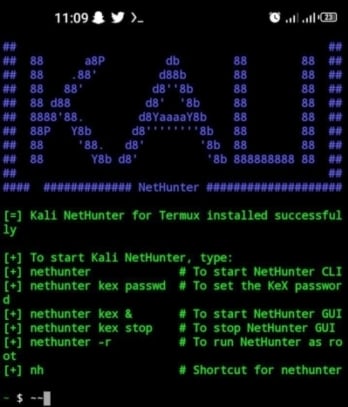 Up to this point, Kali Linux is downloaded and installed on your Android phone. However, you will notice that you are still not getting the Kali shell prompt. To launch Kali, type the command below and hit Enter.

You will now drop to the Kali Linux console as shown in the image below:

You can now use Kali Linux tools and commands just like you would on a Kali Desktop running on your laptop. To get started, execute the command below to check the OS and OS-version. 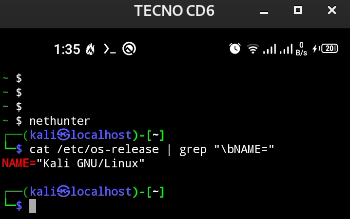 Up to this point, you can only use Kali Linux using the command-line prompt on the Termux. Luckily, there is a way you can easily access and use the default XFCE Desktop environment, which comes installed on Kali Linux. This procedure uses straightforward logic. We will use the Win-Kex utility. A tool that enables users running Kali Linux via WSL access the Kali Desktop Interface on their Windows PC. Kex works by creating a VNC session on Kali Linux, and you can access the running session graphically using a Kex-client utility like Nethunter-kex.

On the Kali Linux console, type kex and hit Enter.

Advertisement
NOTE:
VNC passwords have a limit of up to 8 characters. If you set a password of more than eight characters, it is truncated to 8 (by default).

Next, you will see a prompt to set a "view-only password." Type 'N' for no and hit Enter.

To start Kex on your Android phone, run the command below: 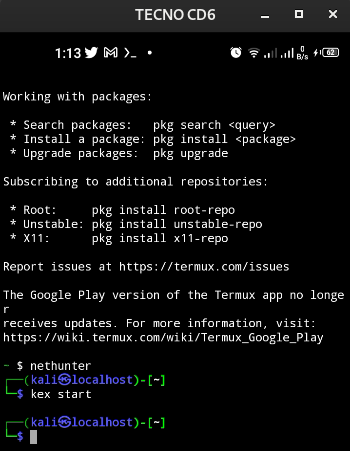 Now, launch the Nethunter application and enter the settings shown in the image below. Luckily most of the fields are filled automatically. All you need to type is the Password. You don't need to type the VNC username. 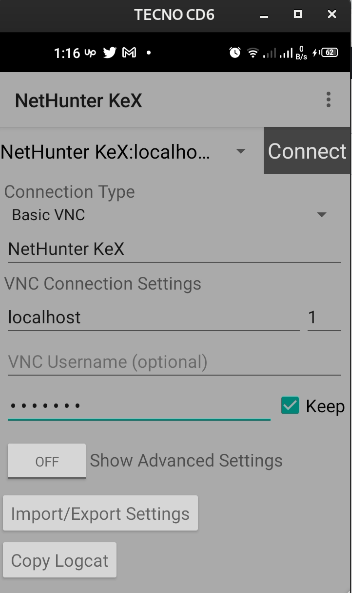 When done, click Connect. That will launch Kali Desktop on your Mobile Phone in landscape mode, as shown below. 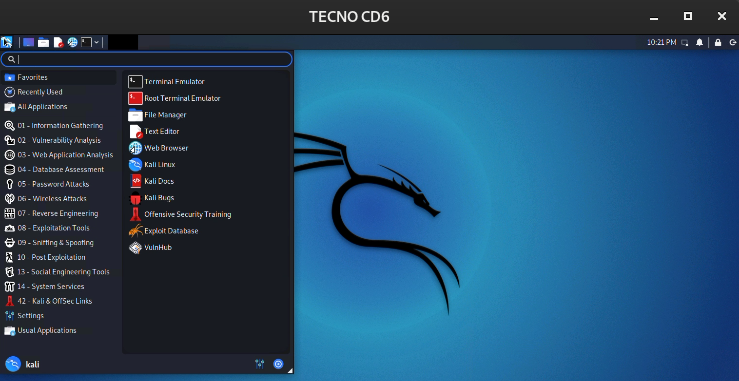 Congratulations! You are now running the full-featured Kali Linux operating system on your Android phone. Of course, navigating through the tiny menus can be a little difficult, but luckily you can use the cursor and using your phone touchscreen as the touchpad/mouse for control. To stop the VNC server, switch to the Termux application and type the command below: 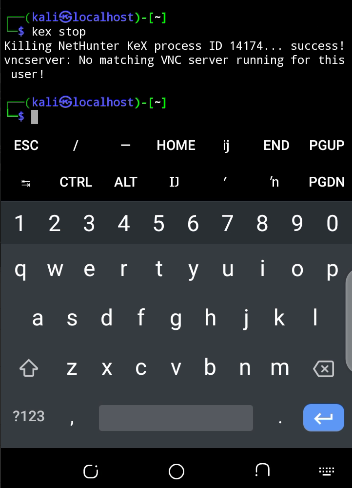 ALSO READ: How to configure port forwarding in VirtualBox for NAT Networking

Even though we have successfully installed a full-featured Kali Linux on Android device, running some utilities that require root permission on a non-rooted device will be impossible. However, that's a slight glitch as many tools don't need root permission. Running Kali on your mobile phone can be pretty handy with tasks like Password cracking and brute-forcing since nowadays, most phones have plenty of RAM and storage space. That turns your Android device into a hacking utility while still performing the functionalities of a mobile phone.