Hello learners, in our previous guide we learned how to use hashview to crack password hashes from a predefined wordlist. In this guide, we will learn how we can use Crunch, an open source software to generate wordlist containing possible password combinations. While cracking hashes or attempting a brute force attack using worldlists available online such as Seclists may prove unfruitful in our attempt to decrypt passwords. This is where the Crunch comes in. Crunch is helpful in a case where we have a clue of what the password looks like.

Crunch is a utility that comes preinstalled on various Linux distros. Crunch is used by security professionals to generate predefined wordlists to fit the needs of the user while cracking passwords. Some of the features of Crunch include;

In order to install Crunch on Kali Linux we run the command.

To see if crunch has been installed we can run the command.

How to use Crunch as Wordlist Generator

Crunch has options that we can use to generate wordlists that fit our needs. These options are;

Crunch allows us to generate wordlists containing at least a numerical value and an alphabetical value. To generate such combinations using crunch we run the command.

ALSO READ: How to set up WordPress Reverse Shell [100% Working]

In some cases, people prefer using both alphabet and numerals for passwords. While generating passwords in such cases, our charset will contain both numerals and alphabets as shown below.

As shown in the image above we have generated 335,664 possible passwords.

Using permutation for generating a wordlist

In a case where we are sure a certain phrase is used in a password we want to crack, we can use the -p flag to specify the phrase used so as to include it in our generated wordlist. Crunch also allows us to include more than one phrase while we generate wordlists. Permutations should be separated by a space in between as shown in the image below. 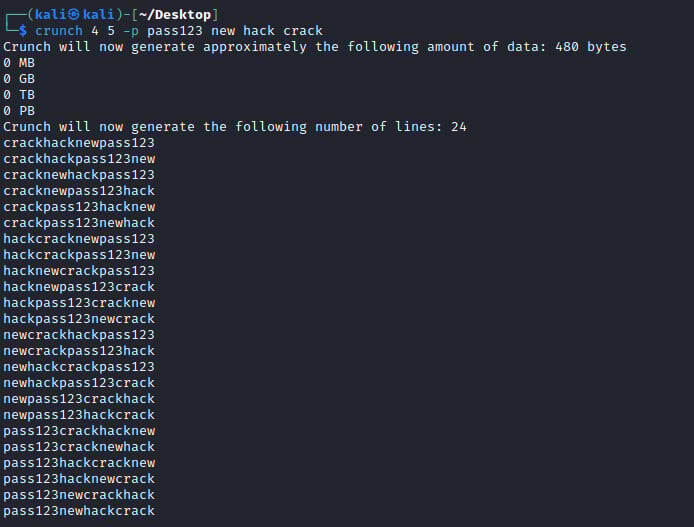 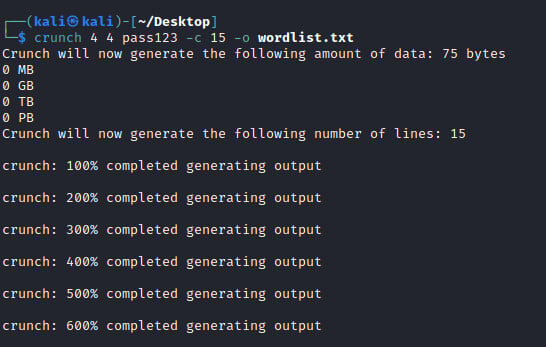 Generate wordlist with a specific pattern

Some people may prefer using passwords that have a specific pattern. For example, a password with a phrase followed by numbers. Crunch provides an option to generate wordlists containing such passwords by specifying the pattern while generating the possible passwords using the flag -t. To do this, we use the special characters we discussed above. For example, in a case where a user has a password as a phrase followed by one number or more, we may use the following command.

The wordlist fragmentation option is useful in a case where the generated wordlist has a large size spanning over several megabytes or even gigabytes. Using the -b flag while we generate wordlists, will split the wordlists into several files depending on the maximum size we have set for each wordlist file as shown in the image below. 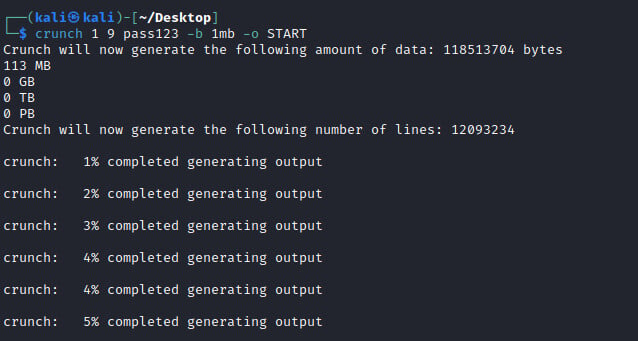 From our working directory, we can see several wordlists we have generated. 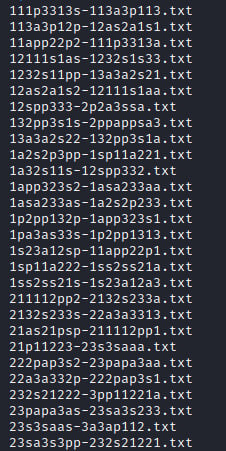 While using the -b flag to split the wordlist files, we are required to add START after the output flag (-o)

A compressed dictionary may be required in a case where we generate wordlist with a very size or in an event where we want to transfer the wordlist for use on another PC. To zip the generated wordlist we will add the -z flag and specify the kind of zip file we want; bzip2, gzip, 7z and lzma. 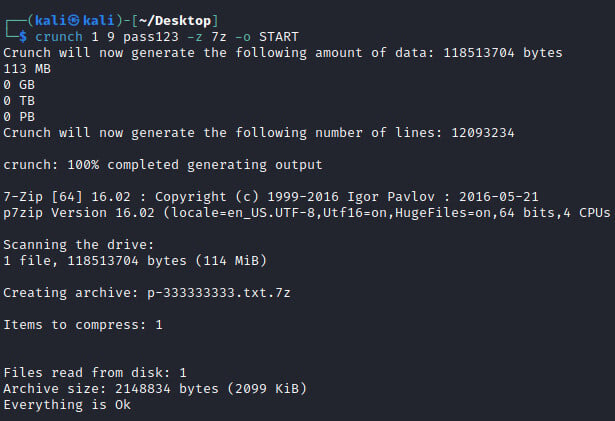