This is an analysis engine from which the analyst analyzes the observables. Cortex uses a Web user interfaces to perform the analysis. The advantage of using Cortex is that it has many analyzers all in one place from where they can be used to analyze phishing email.

It is a free incident response platform which was designed to ease the work of security practitioners. Moreover, it deals with the security incidents that requires investigation and be acted upon quickly.

We first clone Thephish tool from their official github repository.  We clone the repository using the below command to our desired folder on the PC.

After download is complete, we change to ThePhish directory from where we will run the multi-container application.

NOTE:
Advertisement
If you see many errors, this may be caused by file ownership permissions. We need to stop the already running application and change the ownership of the files.

After applying the changes we restart the application.

After you restart the application make sure you configure according to the configurations guide provided to run ThePhish on docker. After you are done with configuring the servers and containers needed to run ThePhish effectively to analyze phishing email, we are now ready to run our first analysis.

Forwarding an email to ThePhish for analysis

When analysis of the phishing email begins, you can view the progress logs of the analysis process as shown on the image below.

In the case created on TheHive, three tasks are created which help to analyze phishing email (ThePhish result, ThePhish analysis, ThePhish notification). The observables found on the suspicious email are extracted which will be exported to MISP.

ThePhish analysis notification - This notifies the user that his/her submission has been received and analysis of the email has began. An example is shown on the image below.

ThePhish result - This comes after the analysis is over, in this notification we have the final verdict to analyze phishing email.

On the image below is an example of the observable features and how they have been classified by the already configured analyzers. 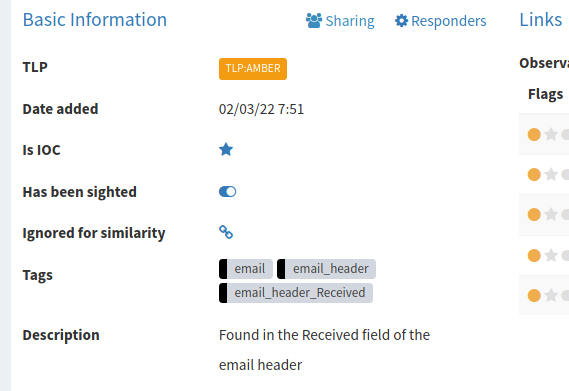 Creating an event on MISP

Each of the observables extracted represent the case which is exported as an event in MISP as shown on the image below.

ThePhish will now send an email containing the verdict to the user via the Mail responder. An example of a verdict from analyze phishing email using ThePhish is as shown below.

This whole process takes not more than 5 minutes, this means that the attacker has not yet done any damage hence a True Positive. On ThePhish a final verdict of the analysis is also provided. The image below is an example of the verdict we got.

If there was no suspicious details found while analyzing phishing email, then the email would be termed safe by ThePhish. After the verdict is given on Thephish, a analyst can still consider looking deeper into the email under question. On the left side of ThePhish window, there are links to Cortex, MISP and TheHive.

In the above guide we were able to use ThePhish to analyze phishing email. ThePhish uses other open source yet powerful tools (MISP, Cortex and TheHive). ThePhish makes it easier even for the user who forwards a suspicious email for analysis to ThePhish. It also provides for the intervention of the analyst to analyze phishing email. Incase the analyst is not satisfied with the final verdict he can go on to reopen the case on TheHive.

Automated submission of the IoC to MISP helps improve the platform with each analysis done around the world hence making MISP a very powerful tool when used for email analysis.