Why to change MAC Address

When it comes to networking, you've probably heard of the term MAC addressed a lot. MAC Address is a physical identity assigned to each interface. Now you may wonder when the MAC Address is already assigned to an interface then why would we want to change it? Well there can be a number of scenarios, speaking from my personal experience

In this tutorial, I will cover what we mean by MAC address, what it's used for, and how to change it. We will use Kali Linux to demonstrate the steps from this article.

First, I will use the ifconfig command to list all the network interfaces available on my Kali machine. What I mean by network interface is any device that allows us to connect to a network.

An example is a Wi-Fi card or an Ethernet card, and so on. So you can see first of all we have eth0, which is a virtual interface created by virtual box when we set Kali to use NAT network. 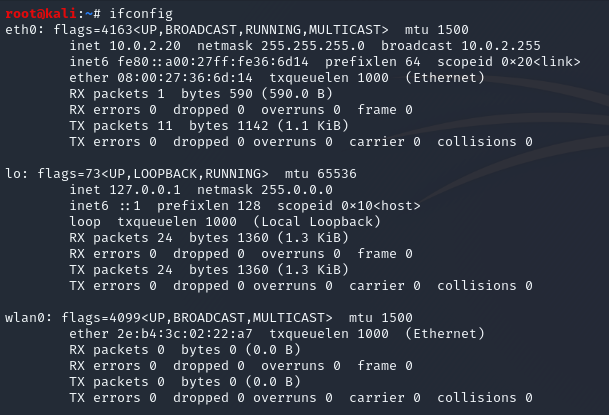 You can see the interface name is eth0, and you can see it has an IP address because, as I said, it's connected to a network.

If we go here, we can see it saying Wired Connected. The interface represents the wired network that Kali is connected to, which is a virtual NAT network.

You can also see the netmask, the broadcast, and an essential piece of information: the ether, which is the MAC address of this virtual interface.

Now lo is the default interface created by Linux, and wlan0 is my genuine wireless adapter. I can use it to connect to Wi-Fi networks. But if I go on the web in here, you'll see Wi-Fi is not connected because I didn't connect to any network, and that's why it does not have an IP address.

Now, this doesn't matter because we want to change the MAC address, which is again shown under the ether part, similar to what you see here for eth0.

Now, to change any of the values you see here, you first have to disable the interface. In this example, we want to change the MAC address to represent it by the ether, and the value is right here.

To disable an interface, we're going to do ifconfig followed by the interface name, wlan0 in my example, followed by down to disable it.

Now, if I hit Enter, you'll see the command runs with no errors, so it means that it got correctly executed. And the next thing that we need to do is change the option that we want to change. And in this example, we want to change the ether, which is the MAC address.

For this example, I'm going to use 00:89:76:88:82:33. Very, very simple command, we're doing ifconfig wlan0 to select the interface that we want to change its option, we want to set the hardware address, and we want to put this address to this specific address.

So you can use any address that you want, following the same format shown here. Just make sure your address starts with 00. So I'm going to hit Enter, and again, we don't see any error messages, so it means the command got appropriately executed.

Now, this is done, and your MAC address has changed. Now, you can go ahead and start using the interface, and it'll appear to have this MAC address instead of its original MAC address. And like I said, this can be useful in so many scenarios. 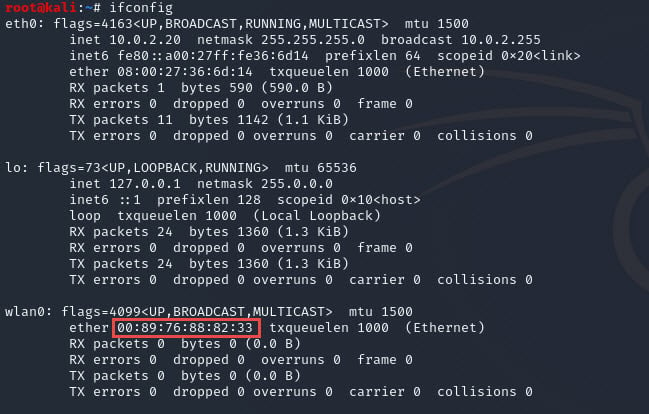 In this section we will change MAC Address of a network adapter permanently which will be persistent across reboots.

Use the -r option to get a random MAC address and specify the name of your network interface.

If you need to use a specific MAC address, you can do that with the -m option and the following command syntax.

The output should show your current and new MAC address that is assigned from macchanger.

To verify the change, try running the ip a command

You might already know that the IP address is used on the internet to identify computers and communicate between devices on the internet. The MAC address is used within the network to identify devices and transfer data between devices. Each piece of data or packet sent within the network contains a source MAC and a destination MAC.

Therefore, this packet would flow from the source MAC to the destination MAC. So because this is a unique physical address to each interface, to each network device, and because it is used to identify devices, changing it will make you anonymous on the network.